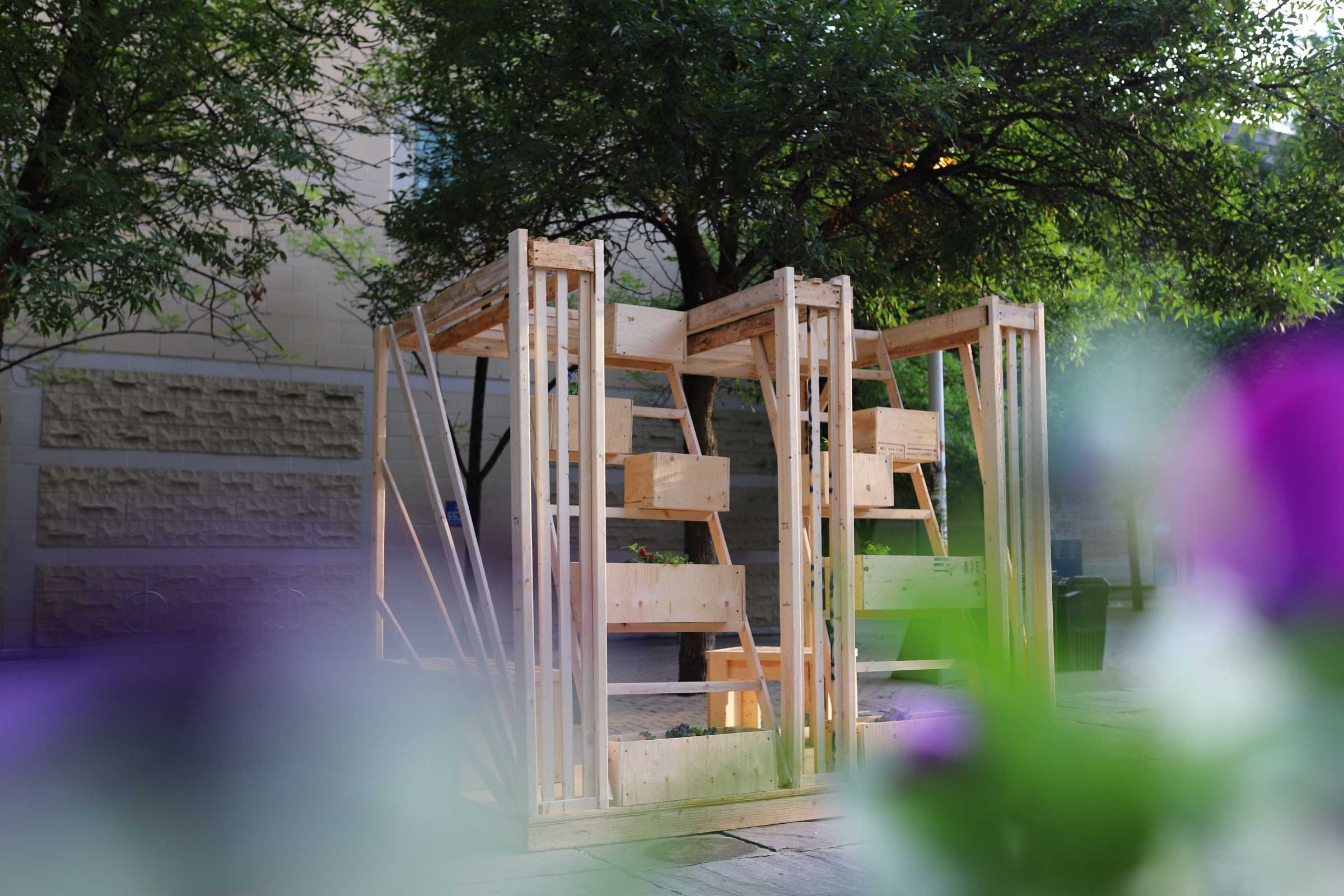 Each year, TimberFever student organizers group together architecture and civil engineering students, and present the teams with an undisclosed design brief. Prompted by themes of sustainability, food insecurity, and food scarcity, each team were assigned crops, and were tasked with building a structure to accommodate their respective vegetation. Some teams focused on water management, while others highlighted accessible design. In the end, 16 structures came together for the 2022 TimberFever theme of the Community Garden Pavilion.

We sat down to speak with Alexandra Winslow, the Architecture Chair of TimberFever, and participants Dinura Fernando, and Jumana Elamin about their experience.

Carousel content with 9 slides. A carousel is a rotating set of images, rotation stops on keyboard focus, on carousel tab controls or hovering the mouse pointer over images. Use the tabs or the previous and next buttons to change the displayed slide. 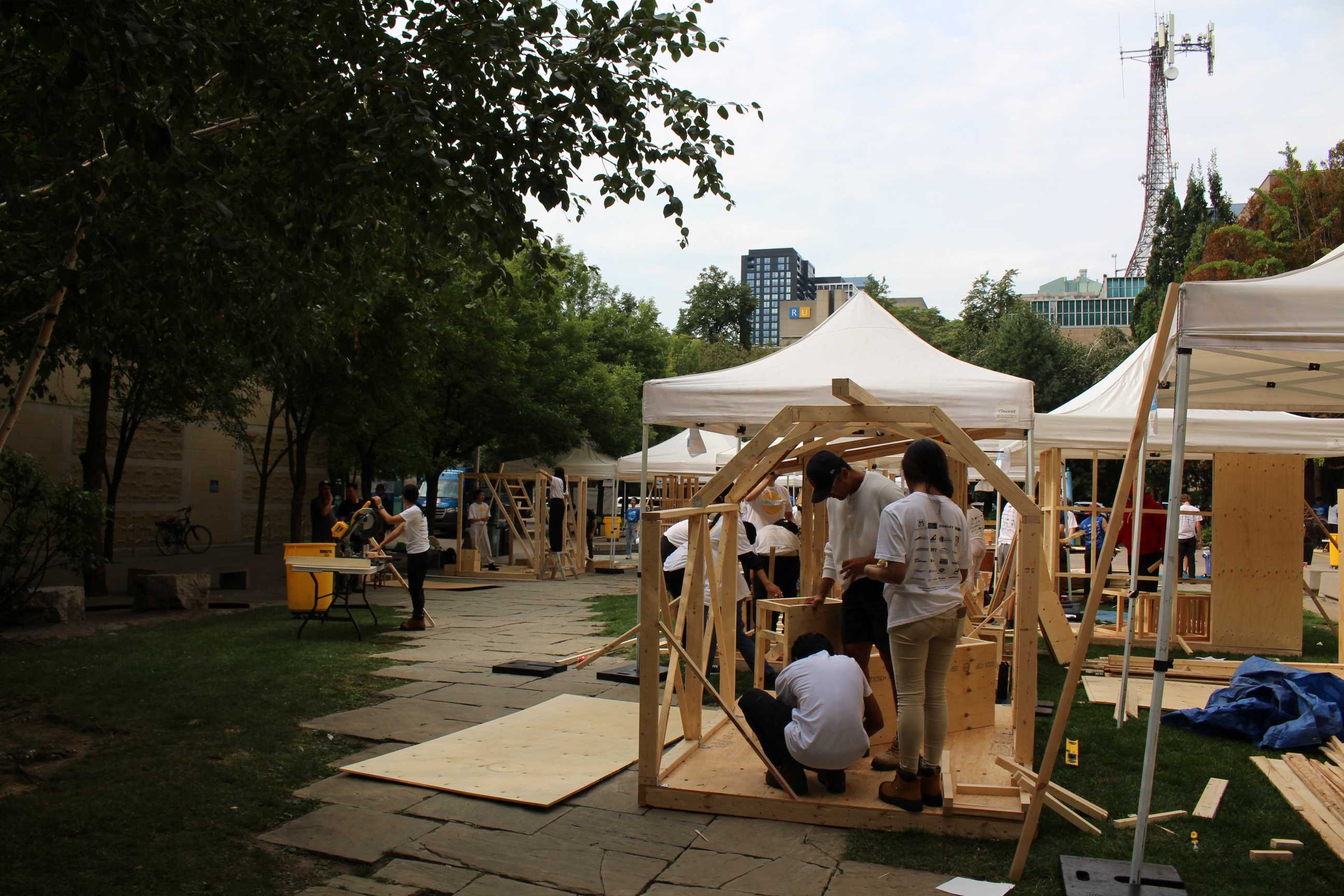 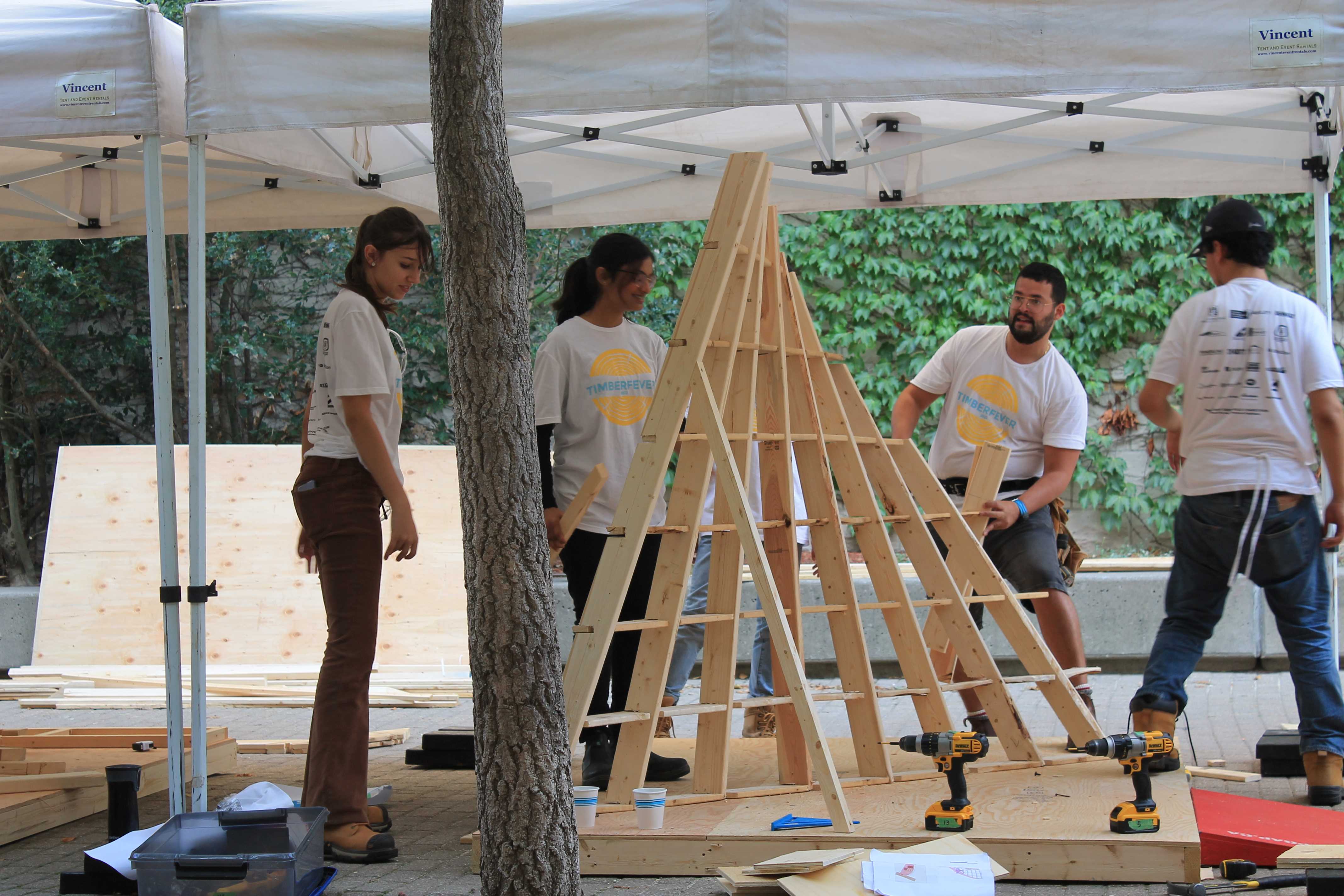 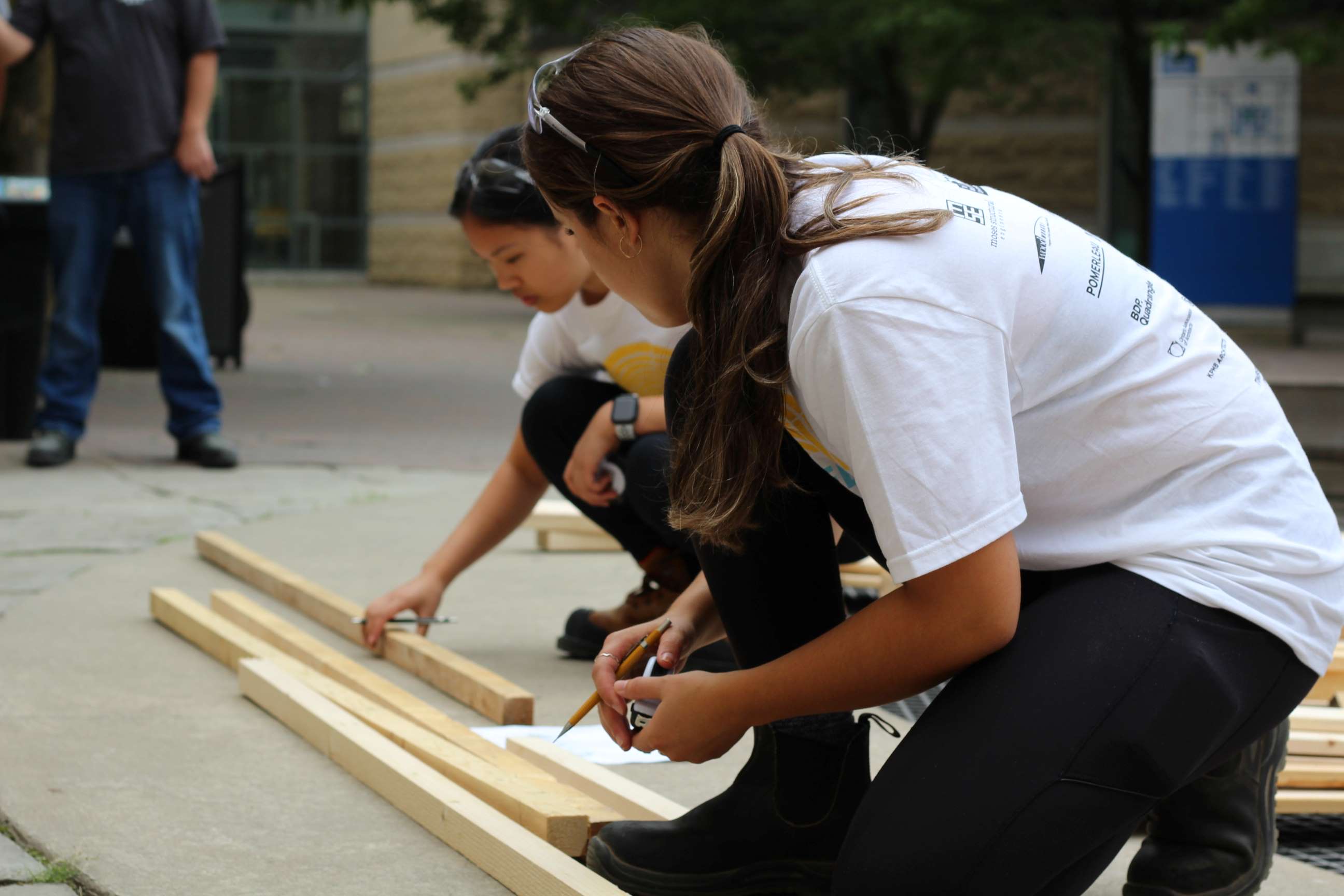 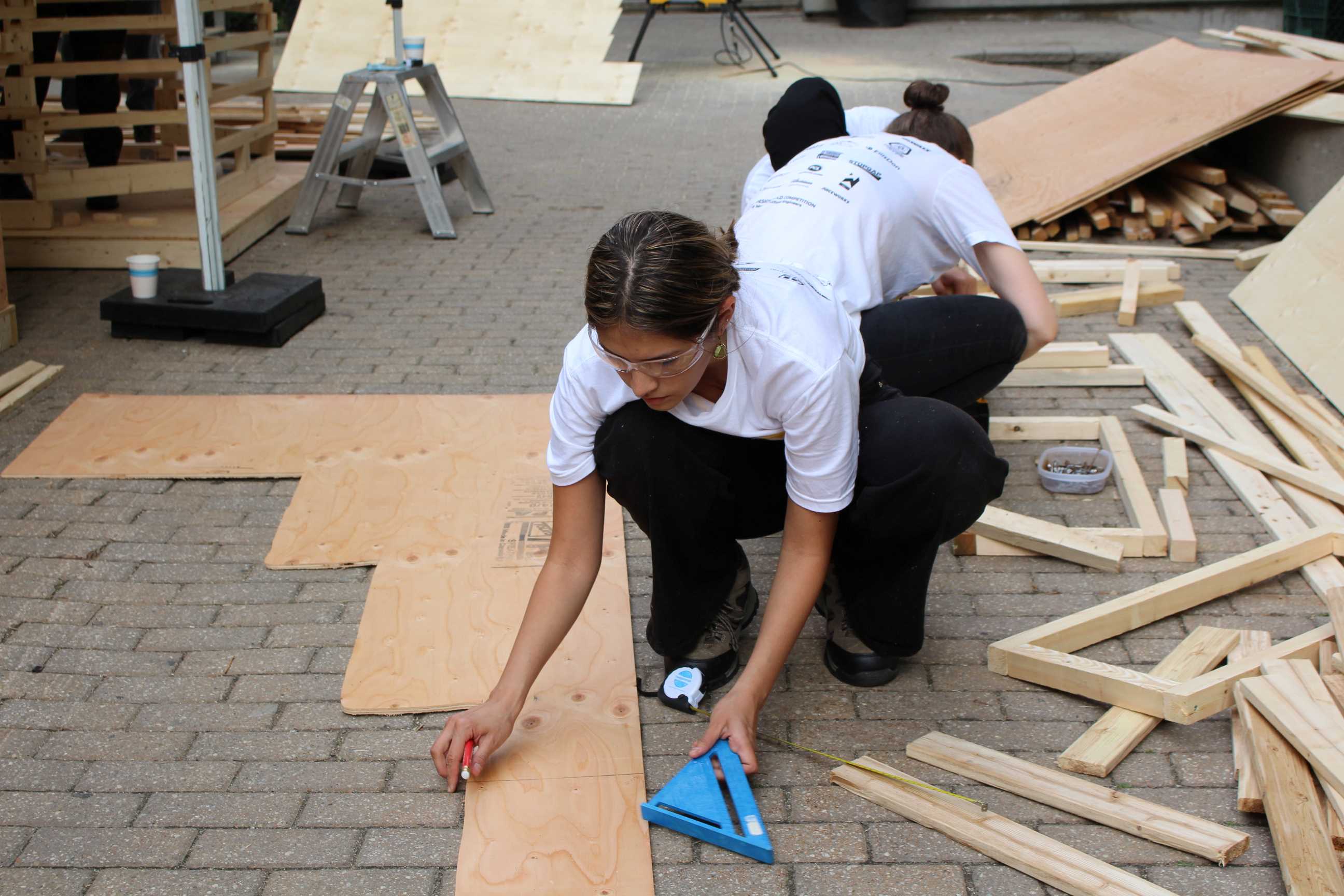 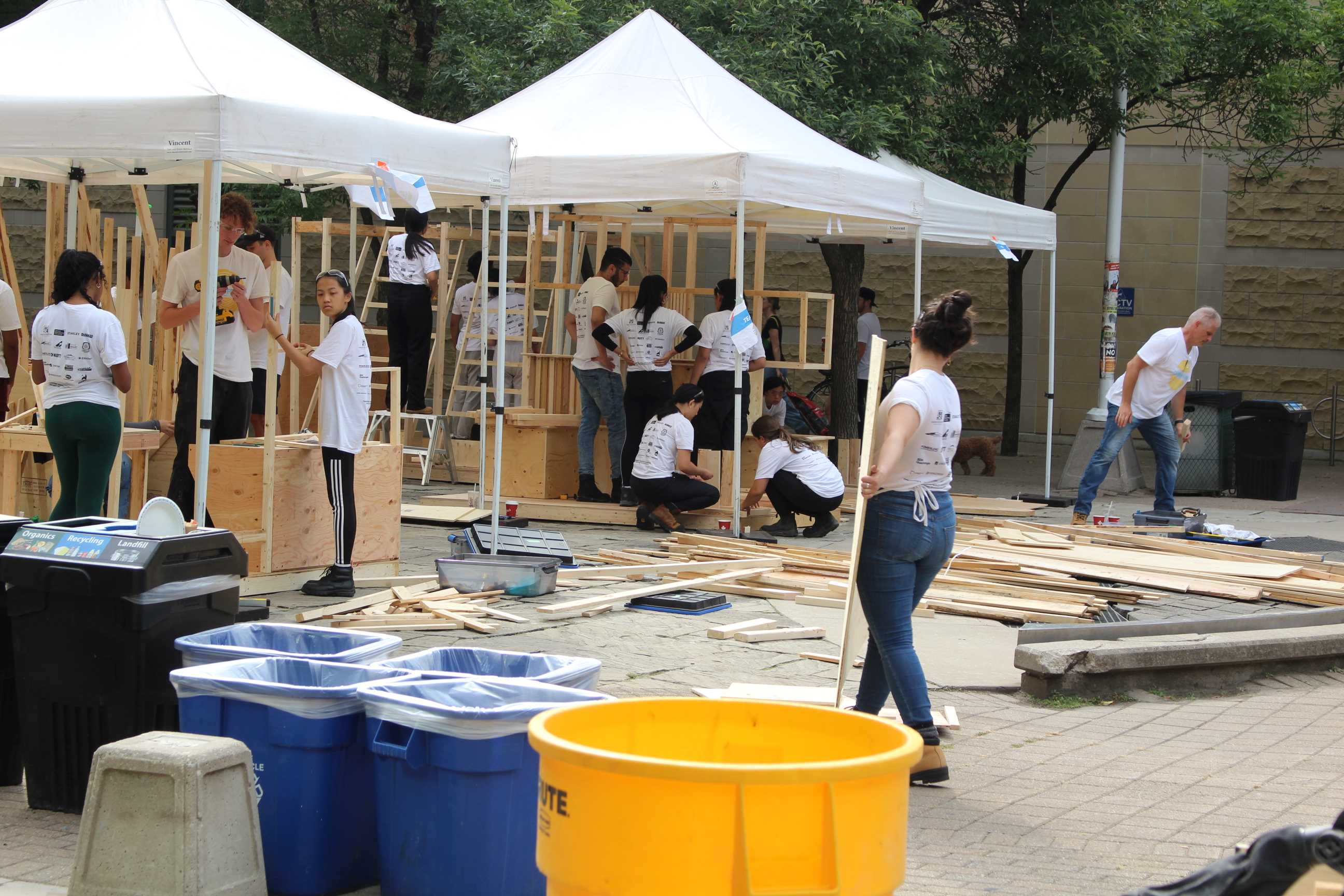 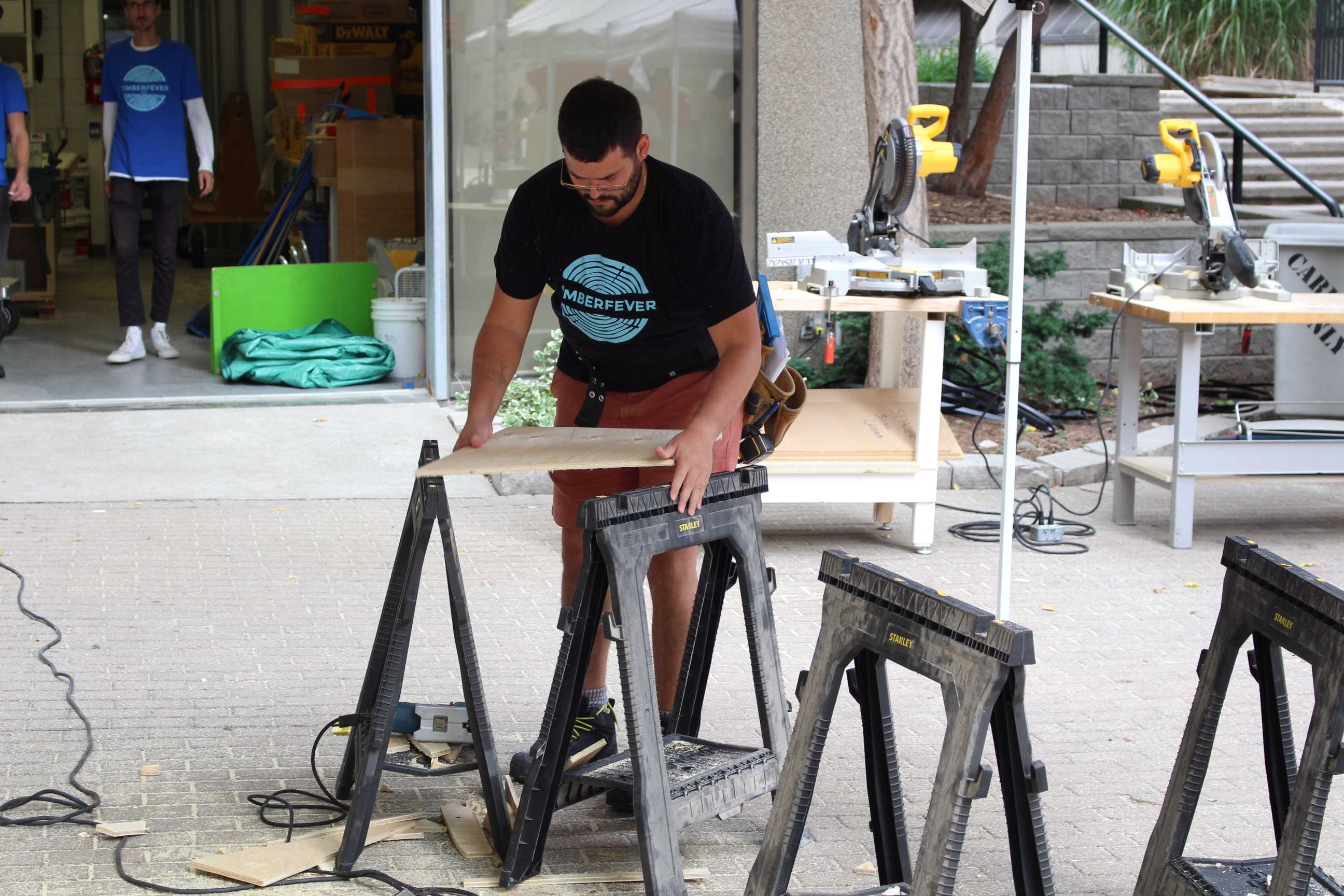 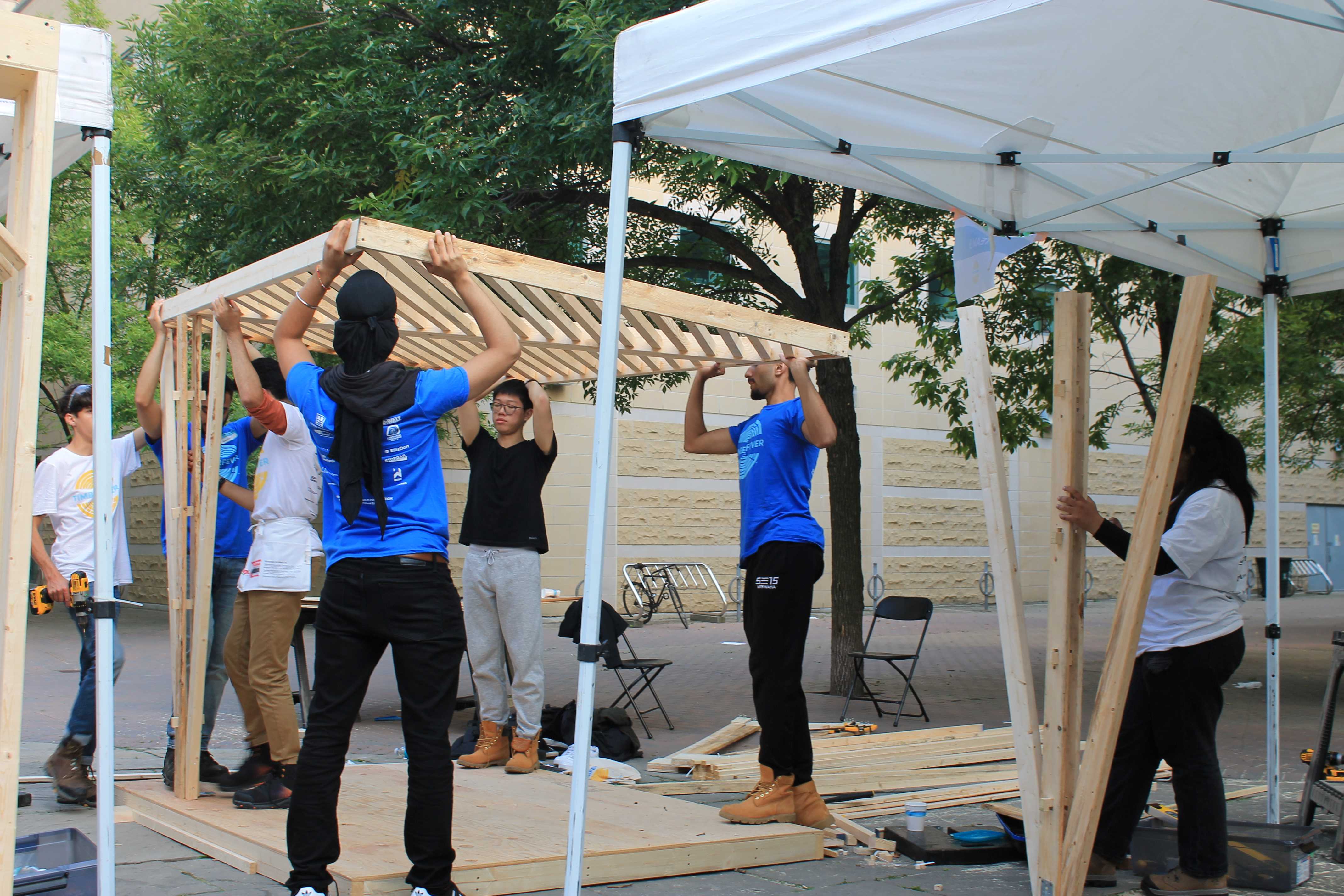 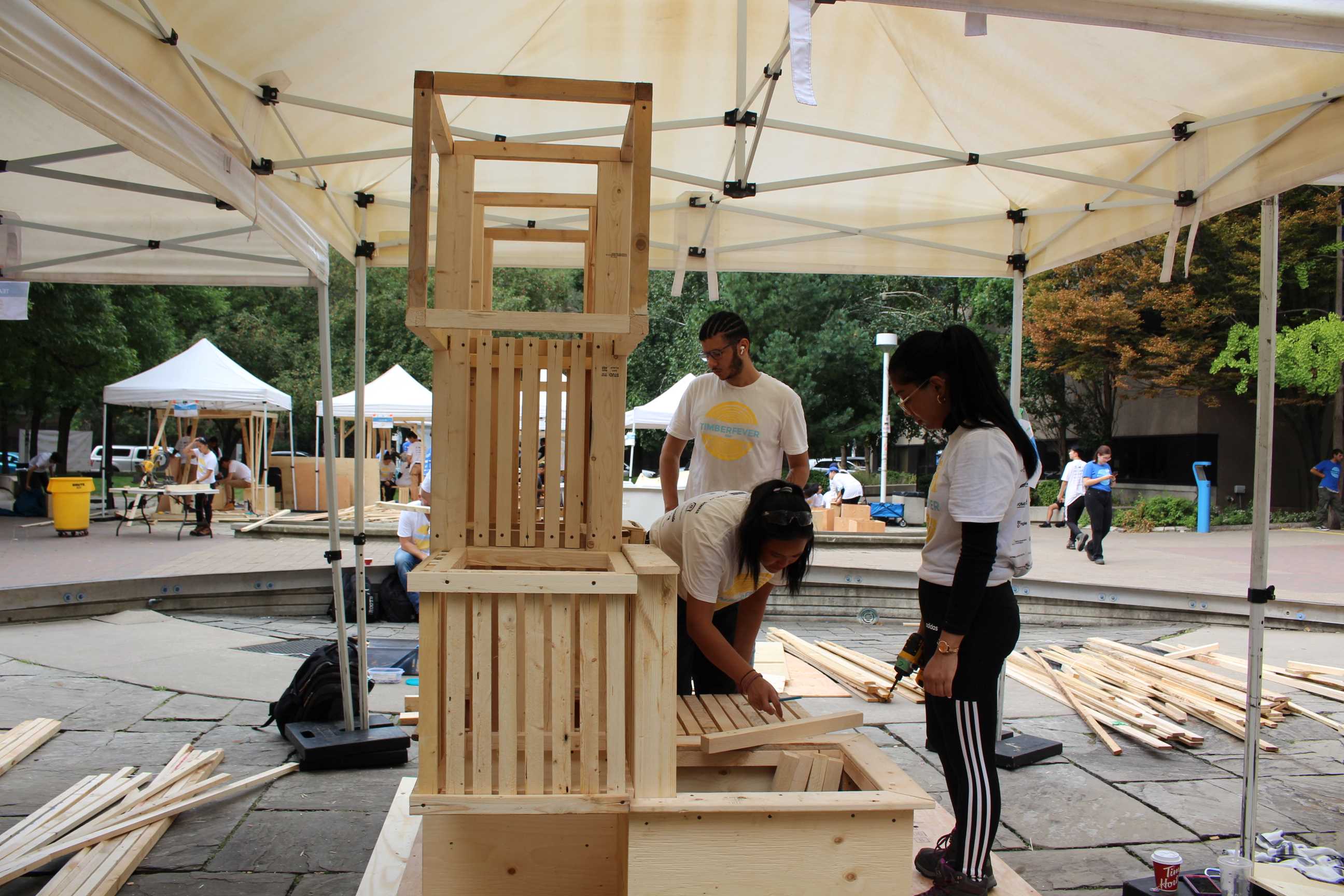 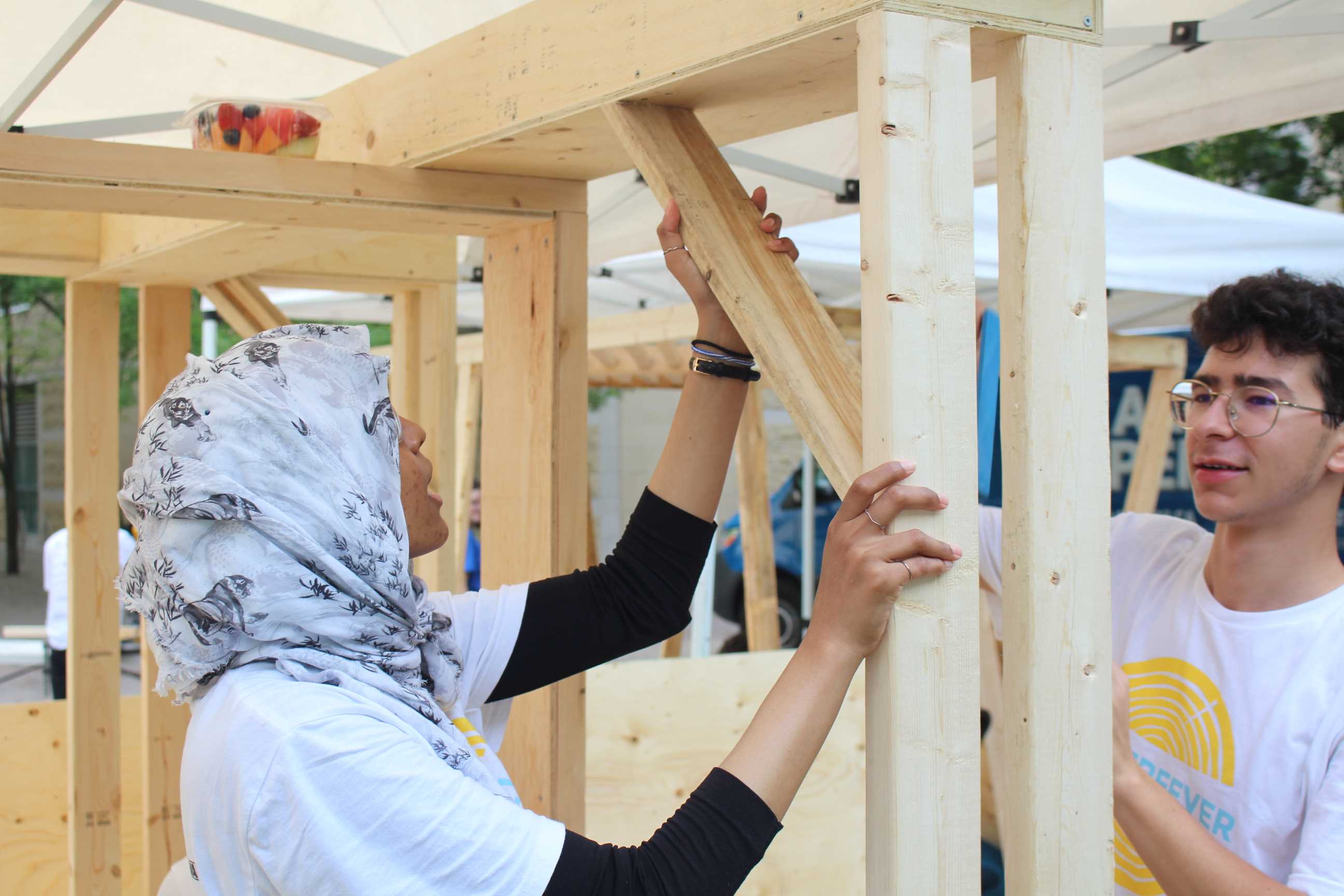 After a day of workshopping and designing, teams began to construct their structures outside the Architecture Building.

How did the organizers come up with the theme of the Community Garden Pavilion?

Alex: Generally speaking, TimberFever tries to address something current. Something that we thought was really interesting, and was topically relevant was the topic of food insecurity. We tried to come up with a design brief that was open-ended enough so that people could start talking about a pressing issue.

One of the most significant classes that really influenced the design brief was the Sustainable Practices (ASC 200) class in first year. That was my first introduction to the idea that architecture can be something else other than building. And for TimberFever, it wasn’t about building a structure for whatever reason, but to think in another perspective, and to embrace a sustainability-based thinking.

From an organizer’s point of view, when we were deciding on this year’s theme, we talked not only about environmental sustainability, but also social and economic sustainability. The idea with the Community Garden Pavilion was that from a social and sustainable perspective, everyone in the neighbourhood could come together to promote inclusive and equal access to food.

The community garden becomes a community coming together. It’s about local sourcing rather than the idea of sourcing from everywhere.

The other thing we talked about when creating this Garden Pavilion, was creating a third place between work and home. The term third place was something that was introduced to me in one of the courses that I took at DAS. So again, looking at not only the environmental side of things, but also social and economic sustainability. And I think that's something that's come up in a lot of my classes, so I know that there would be a lot of architecture students that were really excited to get behind those ideas, and really apply what they've learned in school. 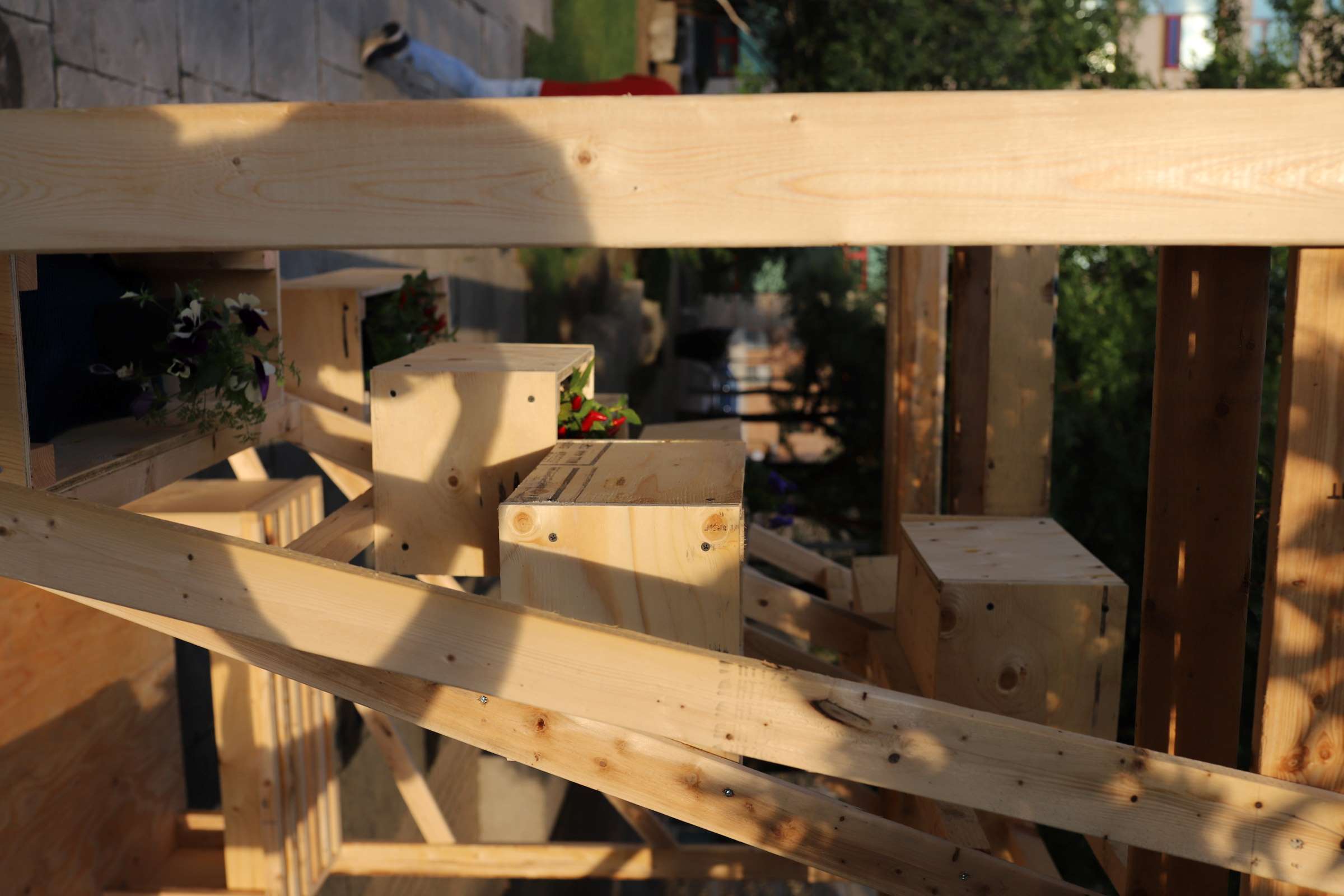 The community garden becomes a community coming together. It’s about local sourcing rather than the idea of sourcing from everywhere. 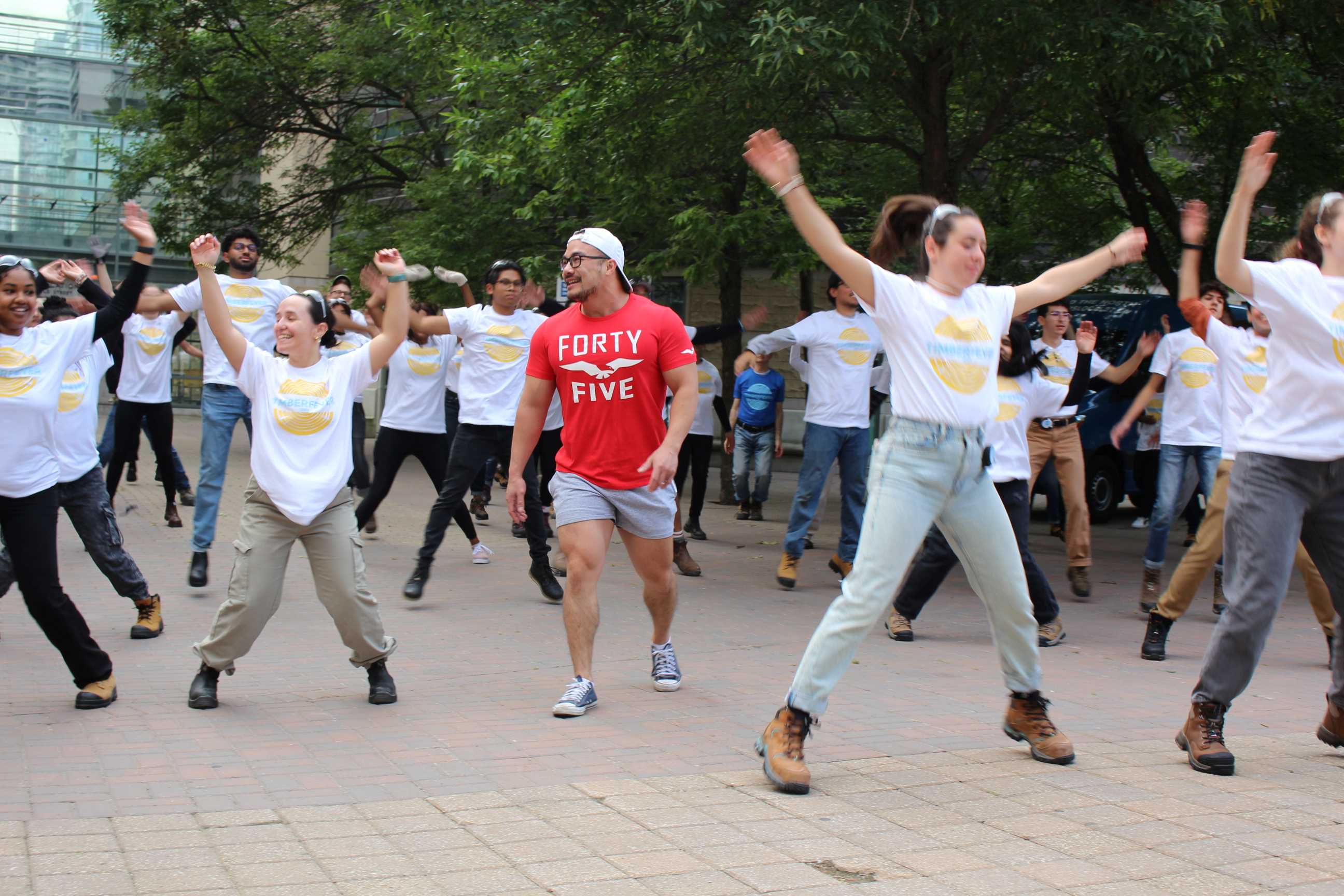 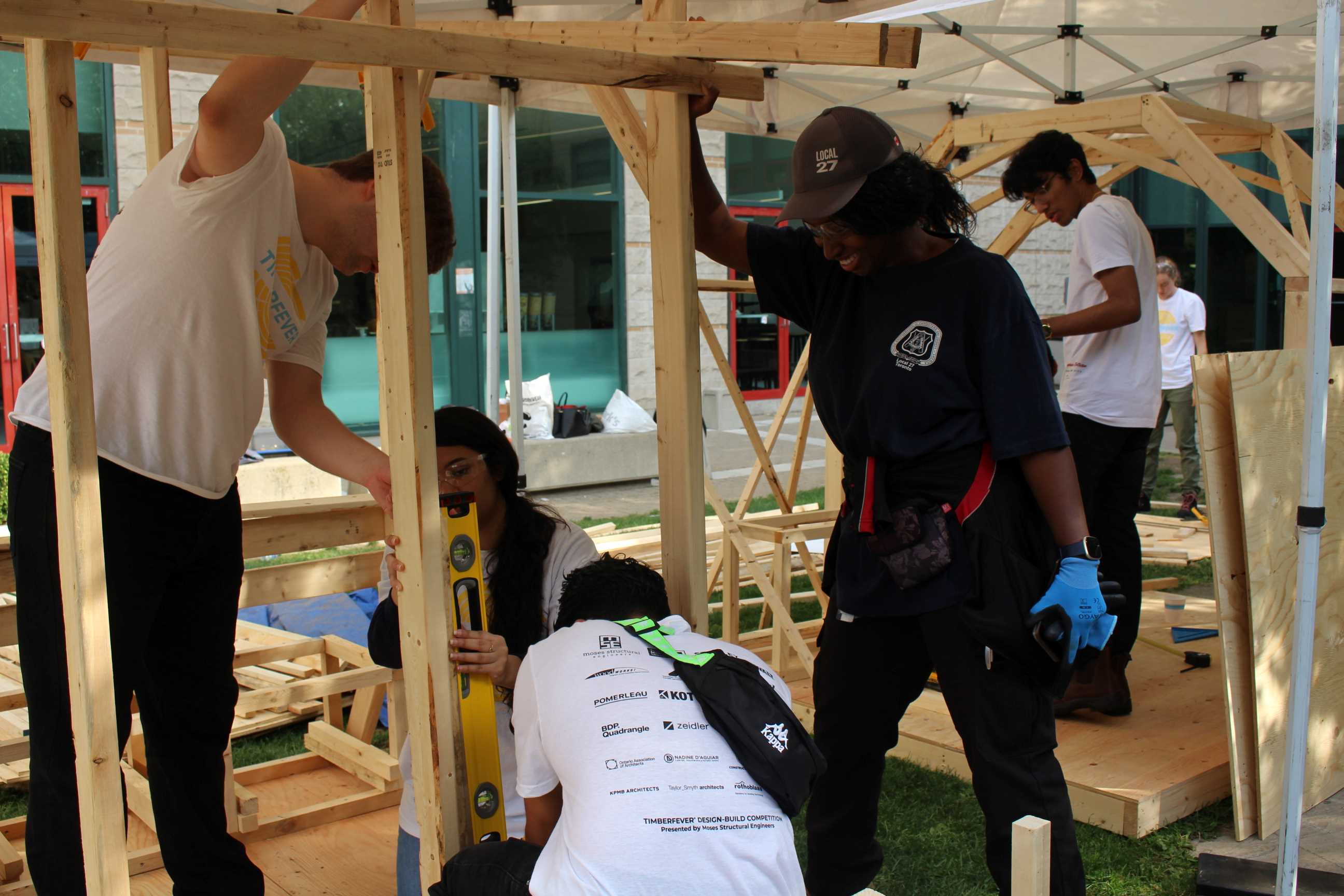 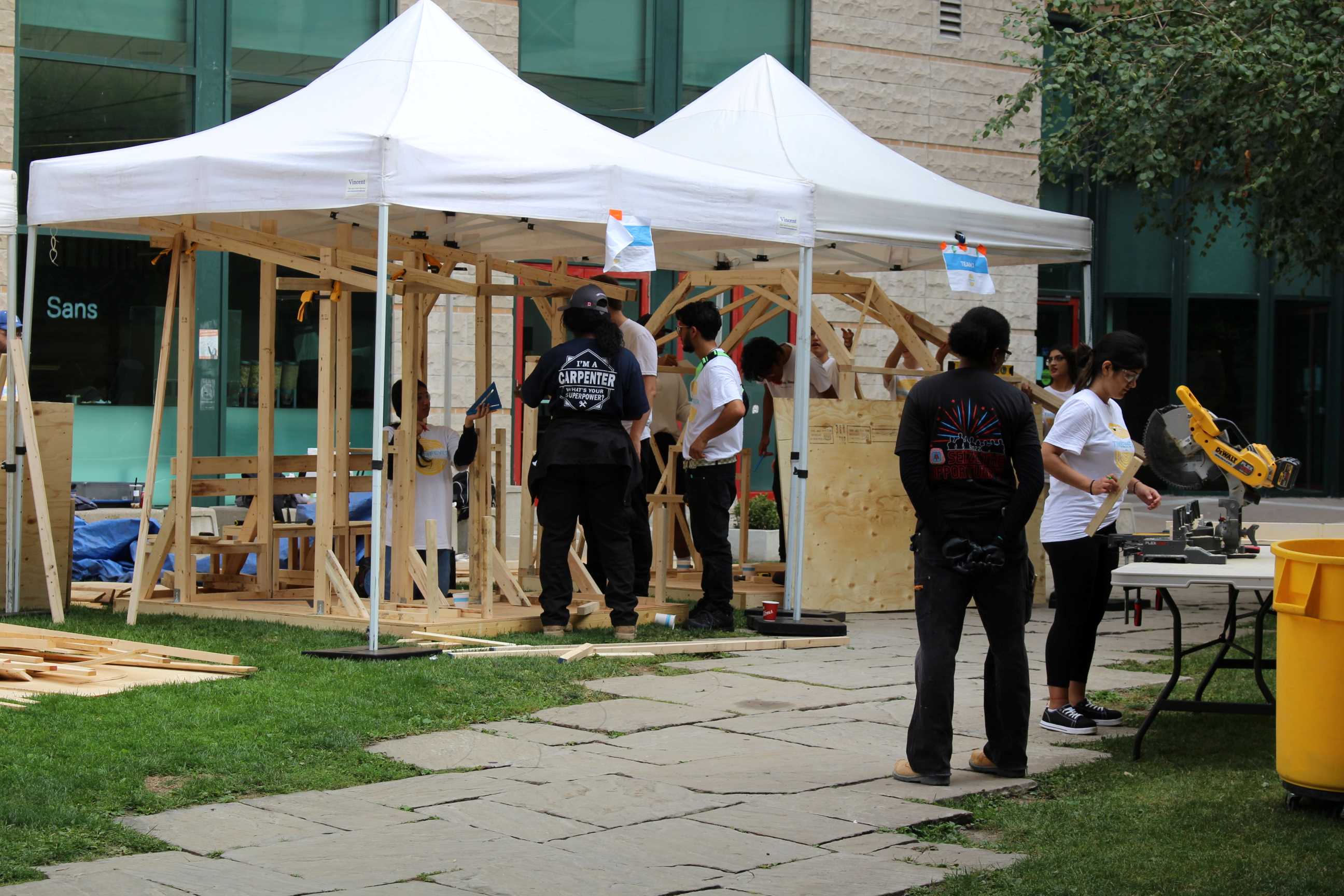 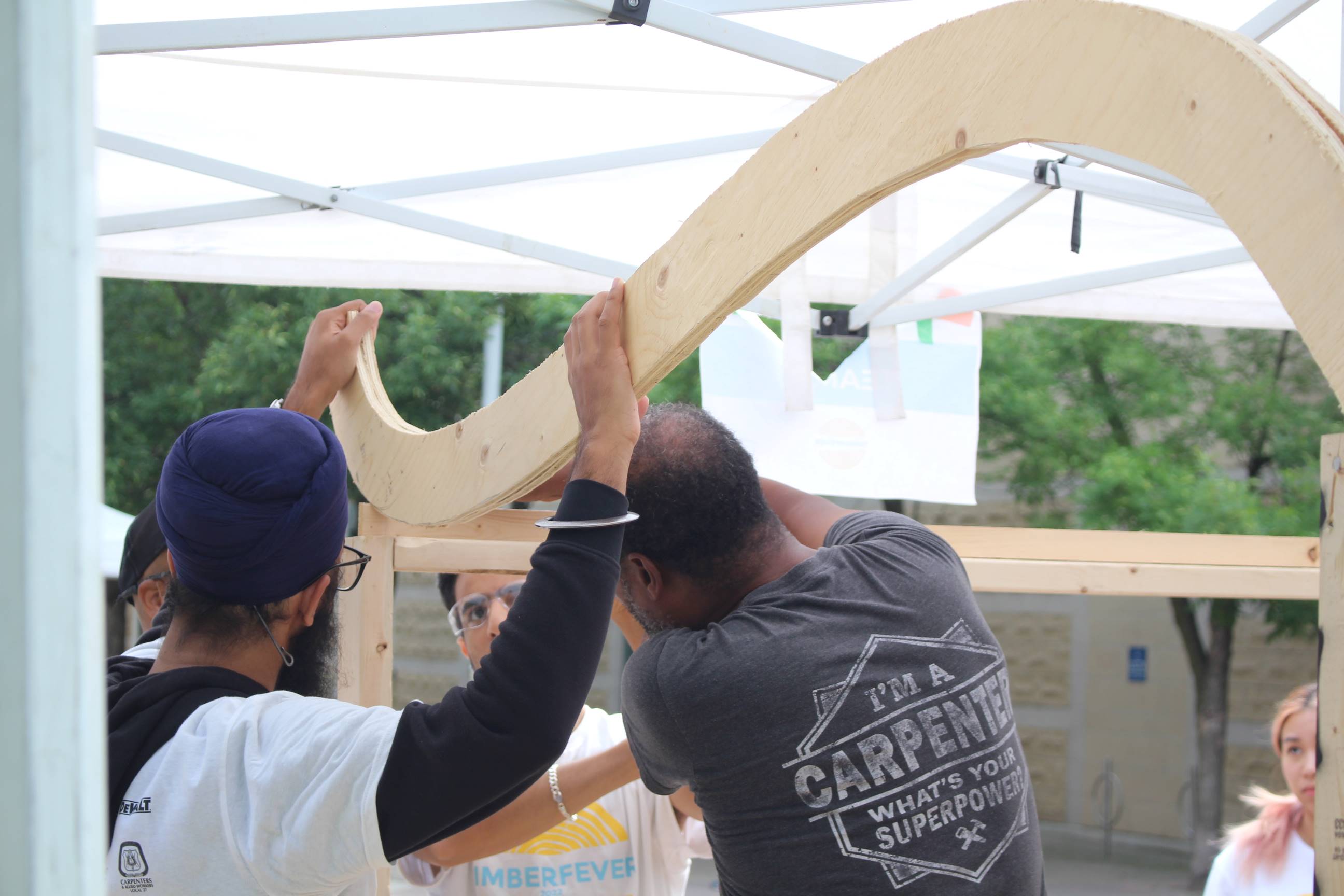 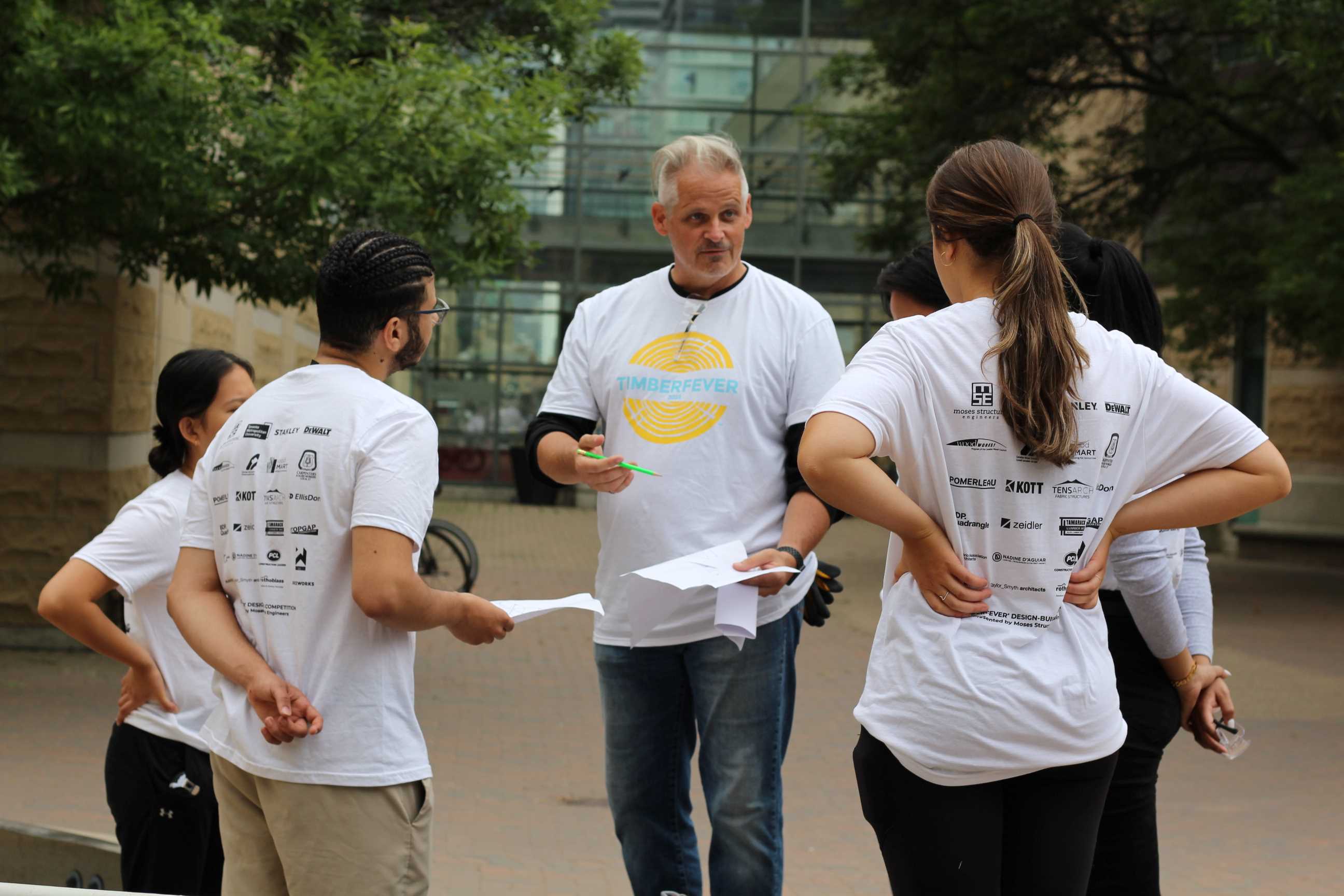 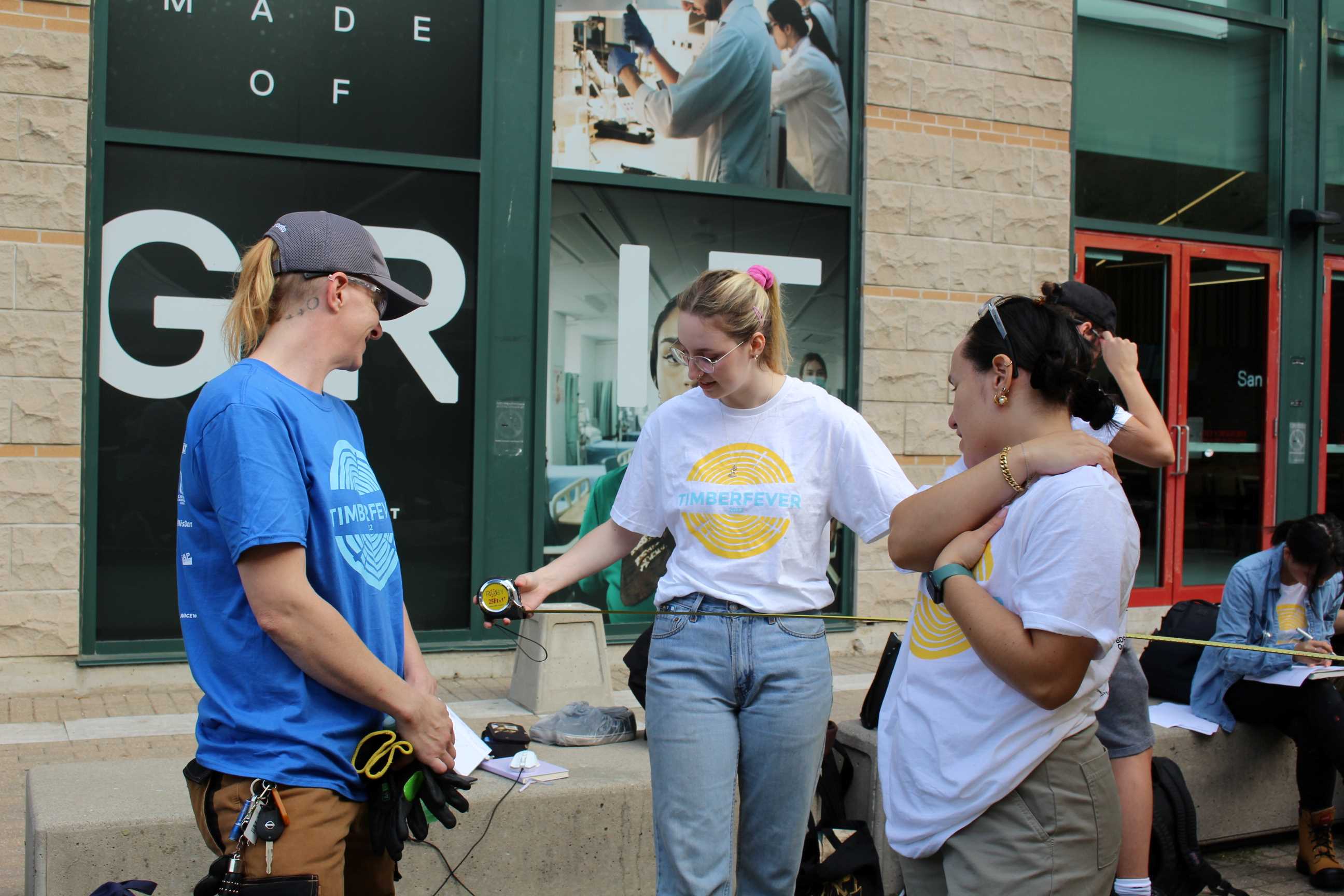 Attracting over 80 participants from AEC programs across North America, mentors helped with both the design and building process. This year’s mentors included AEC professionals, including architects and engineers, and carpenters from Carpenters' Local 27.

What did you think of the Community Garden Pavilion theme this year? How do you think it applies to current issues within architecture?

Jumana: I think the Community Garden Pavilion was a great concept.  It reiterated the importance of incorporating sustainability, the environment, and social community in design.

Sometimes we forget the value of community, and designing with the human in mind when working on larger scale projects, and create spaces that conceptually are great but don’t work or don’t create any positive change in the day-to-day. It was important to bring those concepts back and see how wonderful and inviting a place can be when designed for the environment and human experience. Additionally, with all the mandates for green roofs and vegetative spaces, it was nice to test ourselves to creatively create accessible spaces where people can interact with specific vegetation rather than design a generic green roof or green wall.

Our vegetable was the cucumber and we created a hanging garden inspired by the gardens of Babylon. Once the cucumbers fully grow they would be at eye-level. You would be able to hear them blowing in the wind and pick them off their branches, or sit and watch them as they sway above and around you. 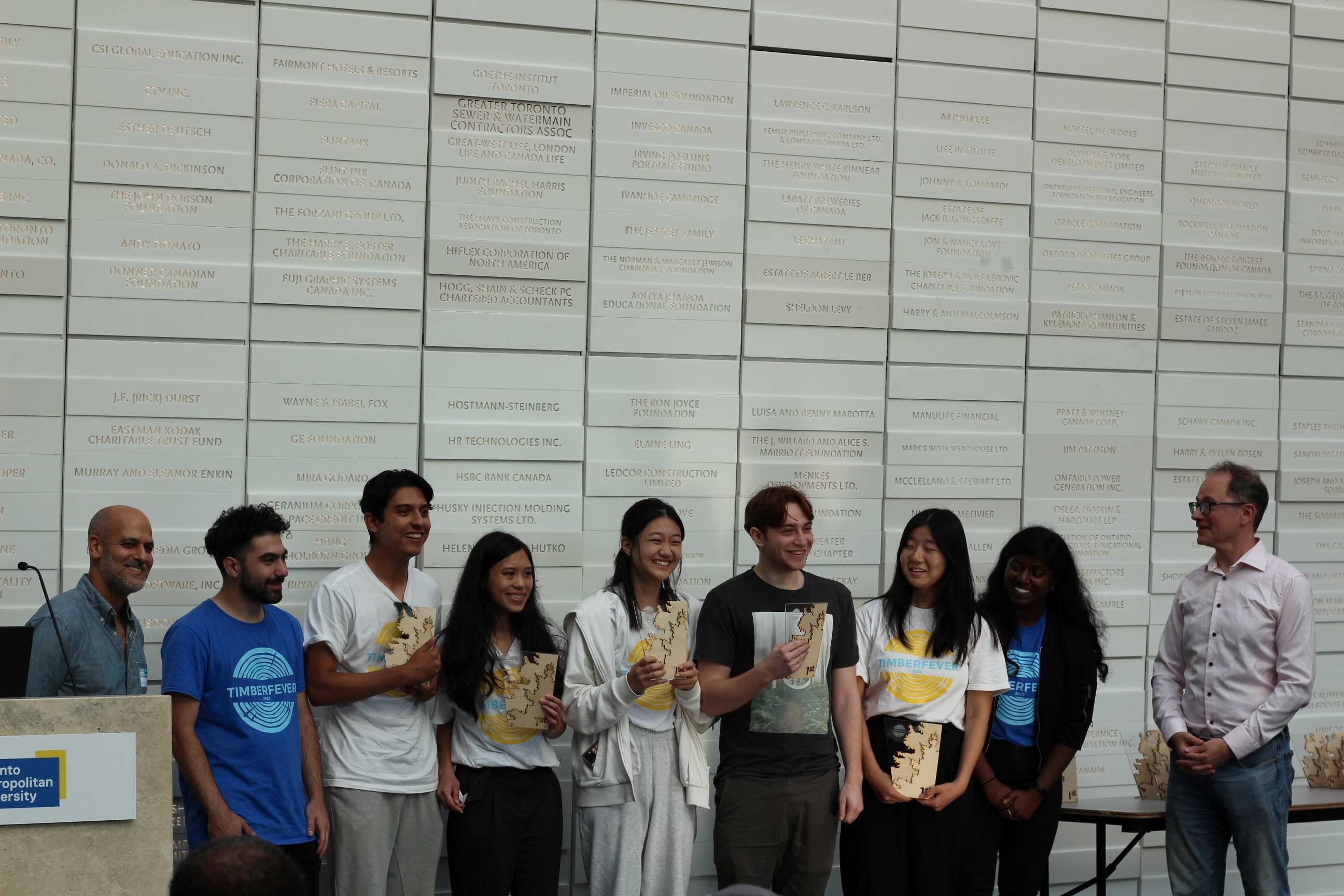 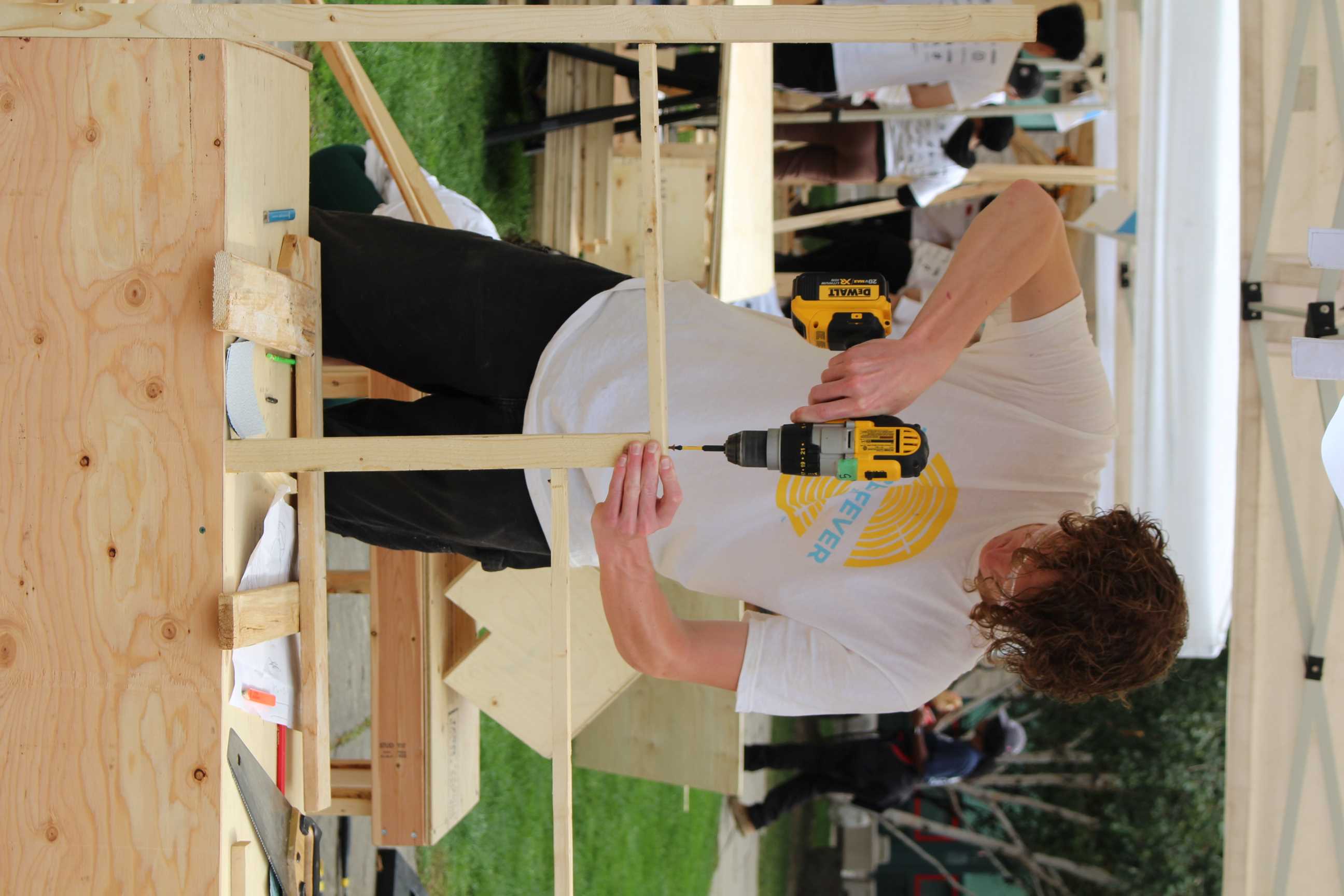 How has DAS prepared you for participating in TimberFever?

Dinura: In terms of designing, the studio of course prepared us for this very well. On the other hand, knowledge from the structures and materials courses came particularly in handy for the construction of the structures.

Jumana: Having the shop available to use really allowed me to have a comfortable experience with the saws and heavy machinery. DAS courses are focused on group work and collaboration, so it was easy to work with others.

I think our studio courses were also beneficial as it made it easy to interact with professionals, since we do it all the time when presenting to our studio professors and guest critics. Some of the submission criteria during the event like parti, concept, diagrams, descriptions, and etc., were things that I’ve previously encountered at DAS. 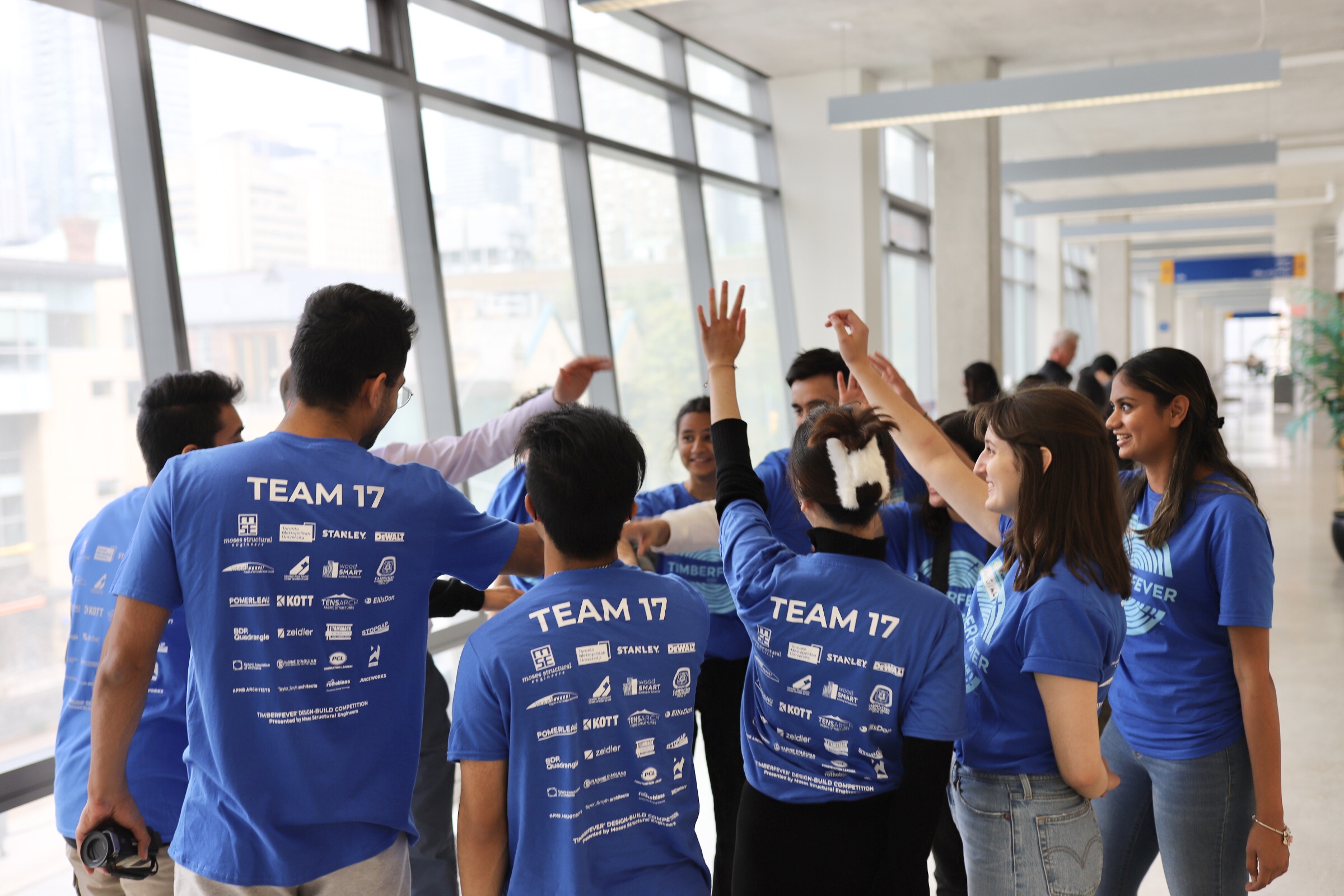 What do you think is the importance of design-build competitions for architecture students?

Dinura: I would say they’re extremely important for architecture students and would highly recommend it to everyone, because not only does it provide that crucial hands-on experience of construction, it also helps us gain a much deeper understanding of architecture as we’re forced to think all the way down to the smallest detail. I would say it also made us design less conceptually, and more realistically.

Jumana: For so many things: seeing designs come to life, working collaboratively in a team, working with limited materials and real life constraints, learning to quickly adapt to and overcome unperceived problems, and so much more.

I would also say designing at a 1:1 scale where every little detail counts is something that I've never really had to really consider. Seeing how vital it was to design to the very last detail, and how an inch can throw off the ambience and feeling of a space, or affect the structural integrity was enlightening.

Alex: What’s interesting about this competition is that the participants aren’t actually going to be constructing buildings in the future. They’re the ones who will be designing the structures, and making sure they’re structurally sound. But it’s hard to do that when you’re completely removed from that process, so design-build competitions are interesting as they close the gap between theory and practicality.

I think for a lot of students moving forward they’re never going to think of design in the same way. Having seen how engineers work, and the engineers seeing how the architects work, it now provides an invaluable insight into the design process. 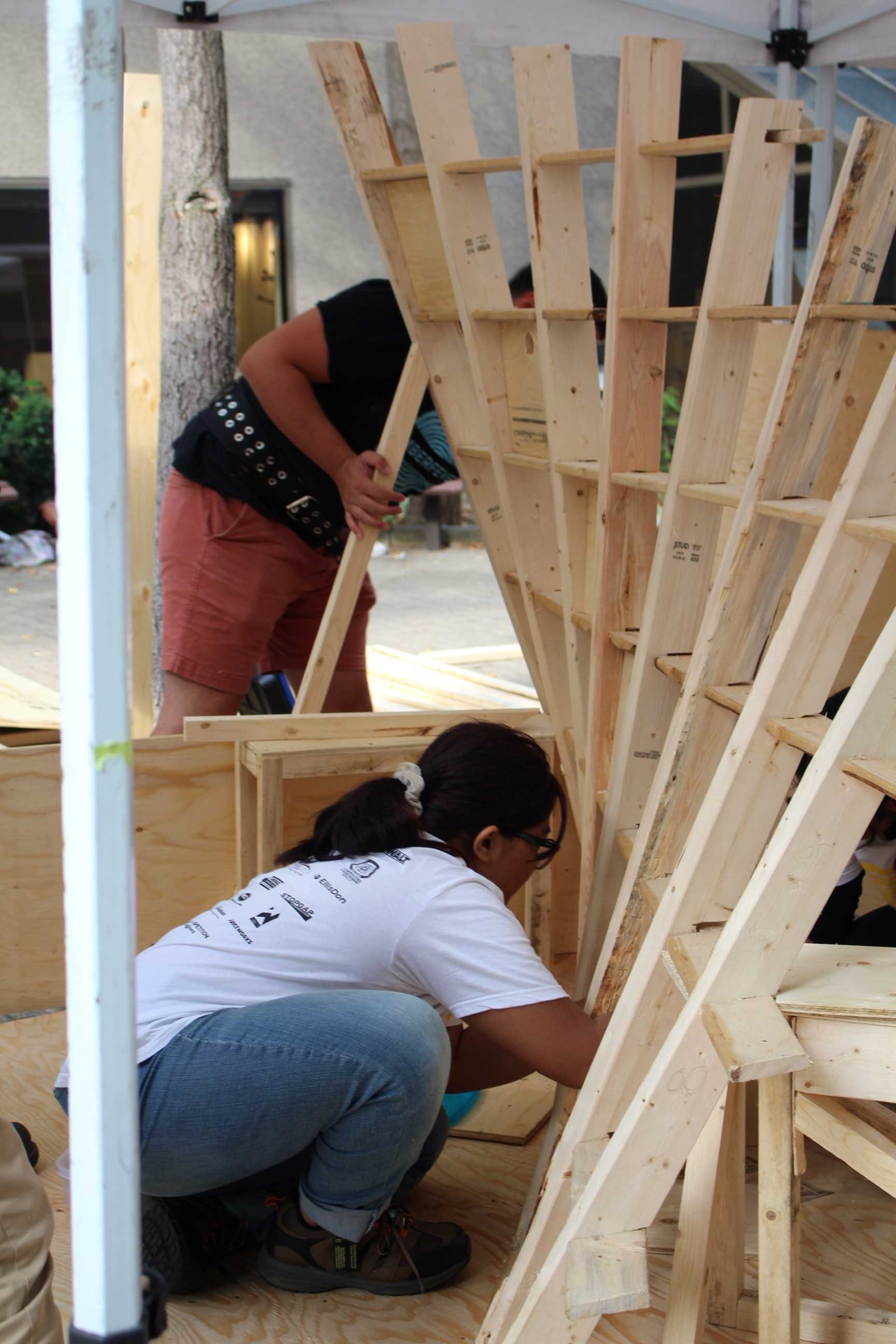 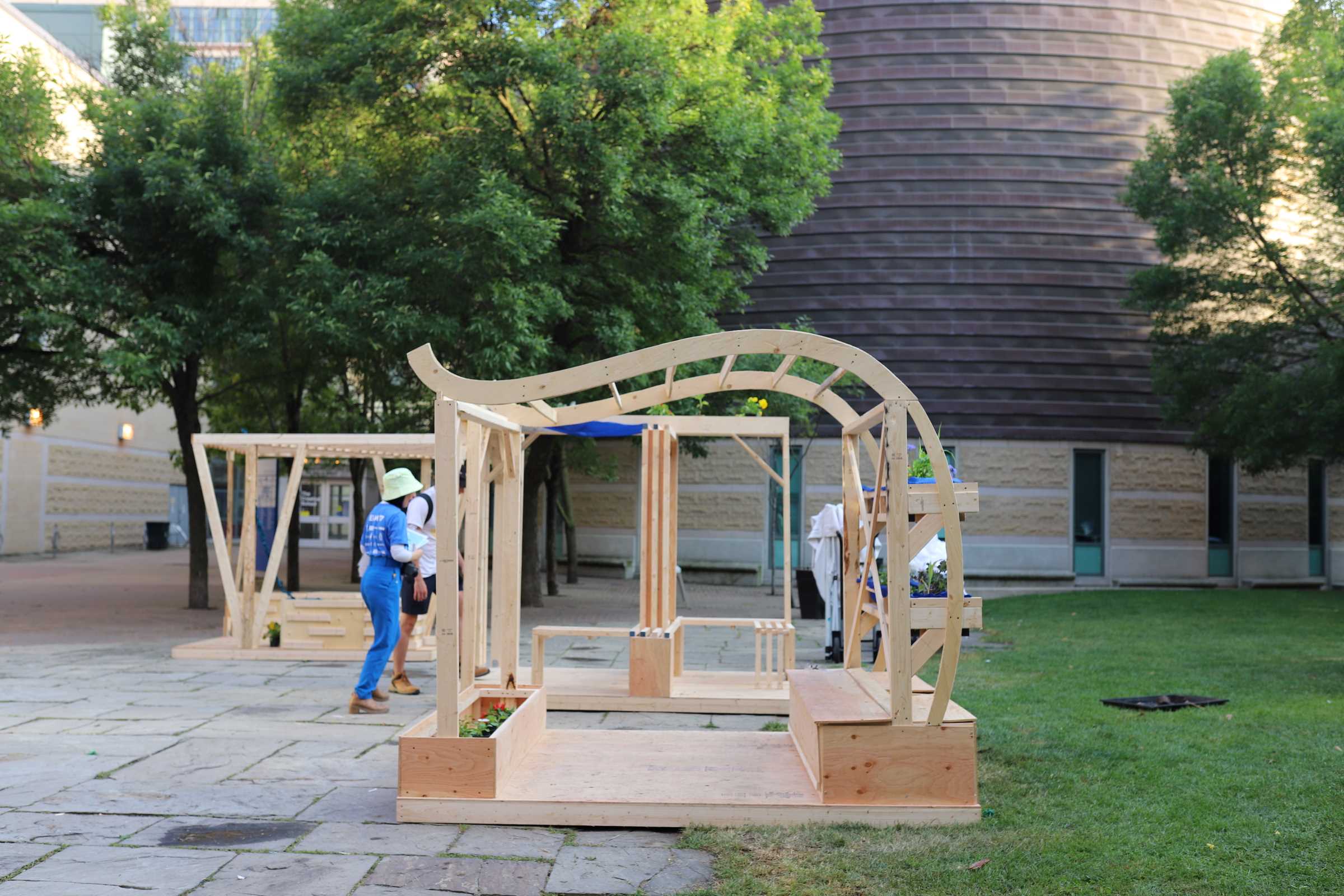 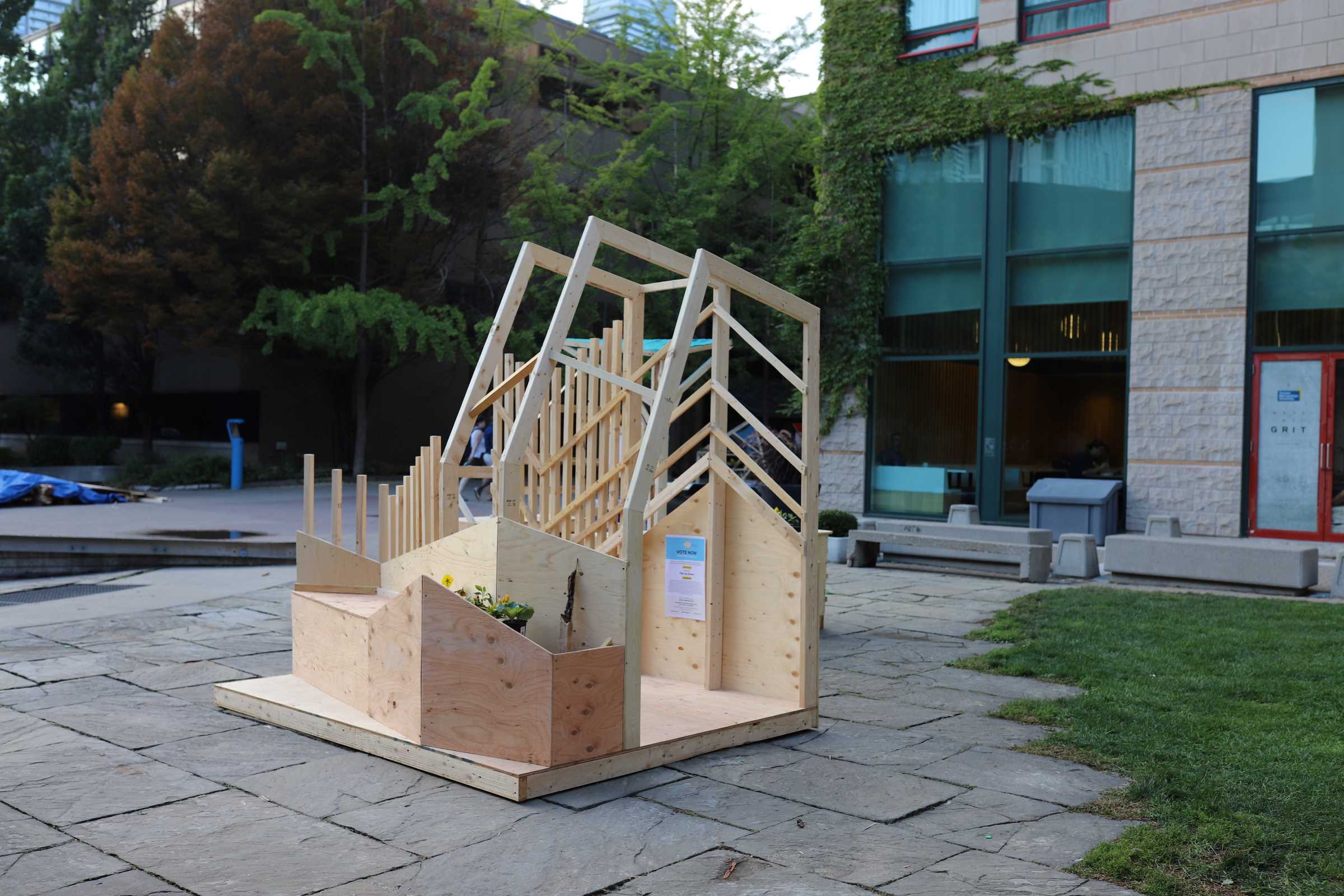 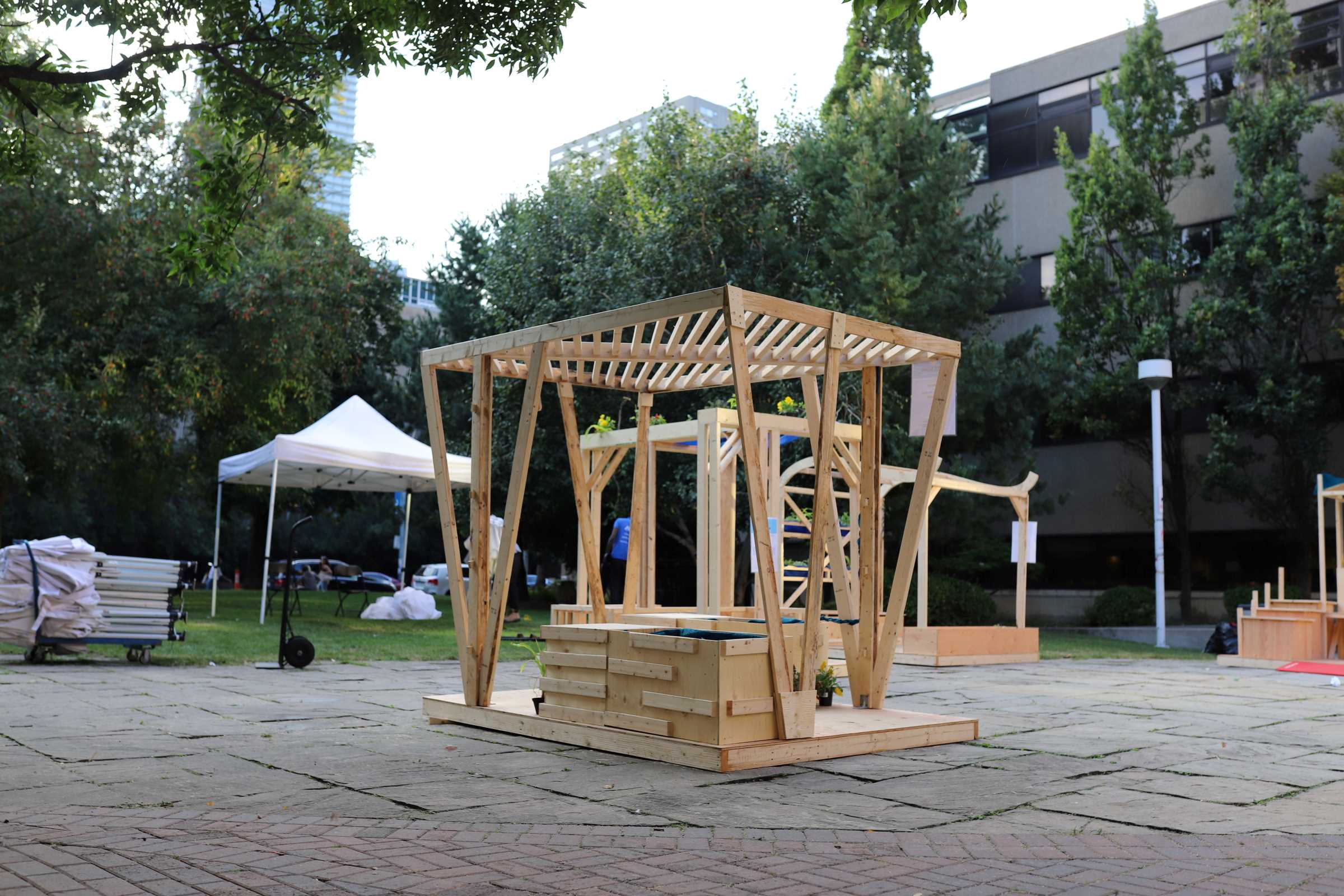 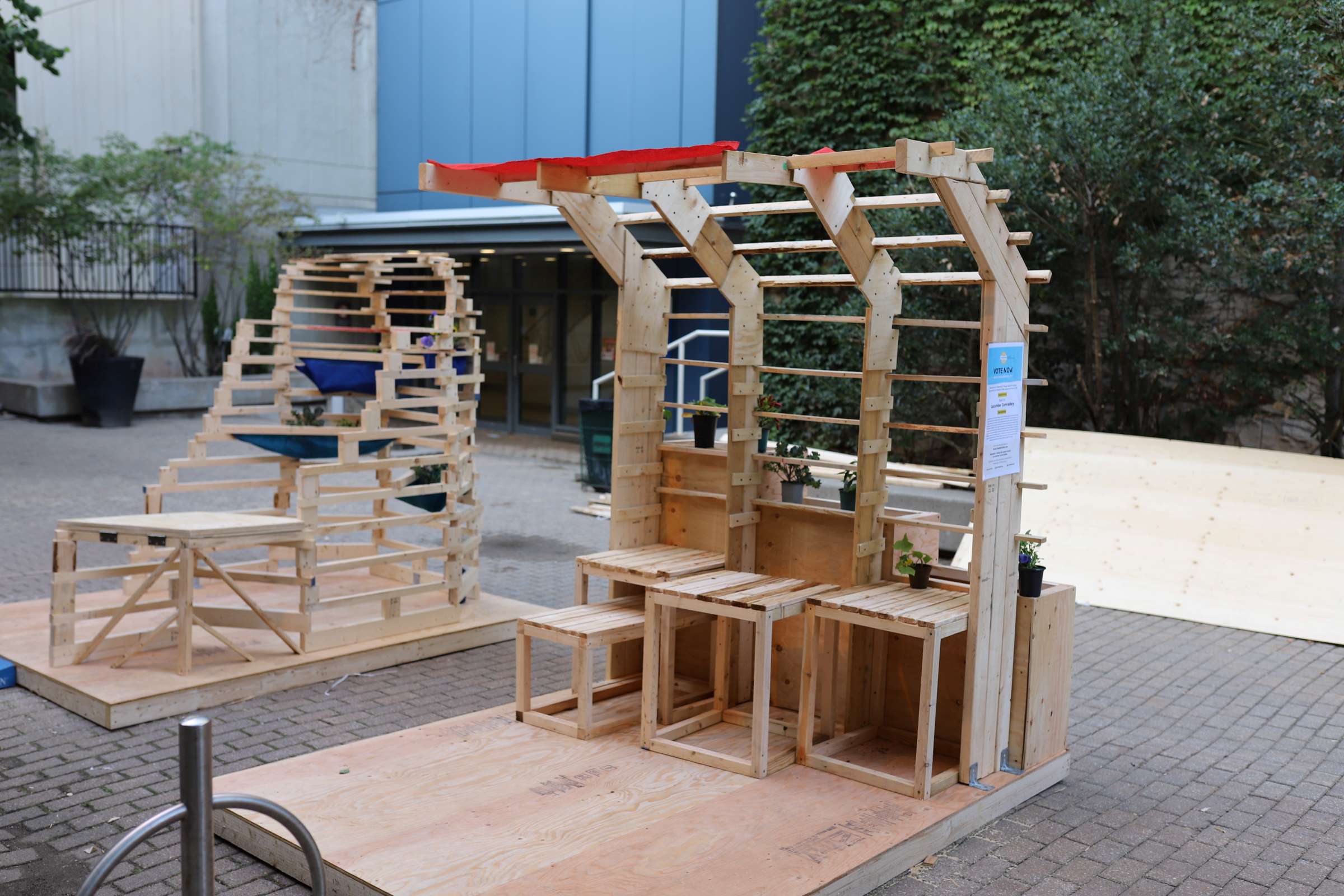 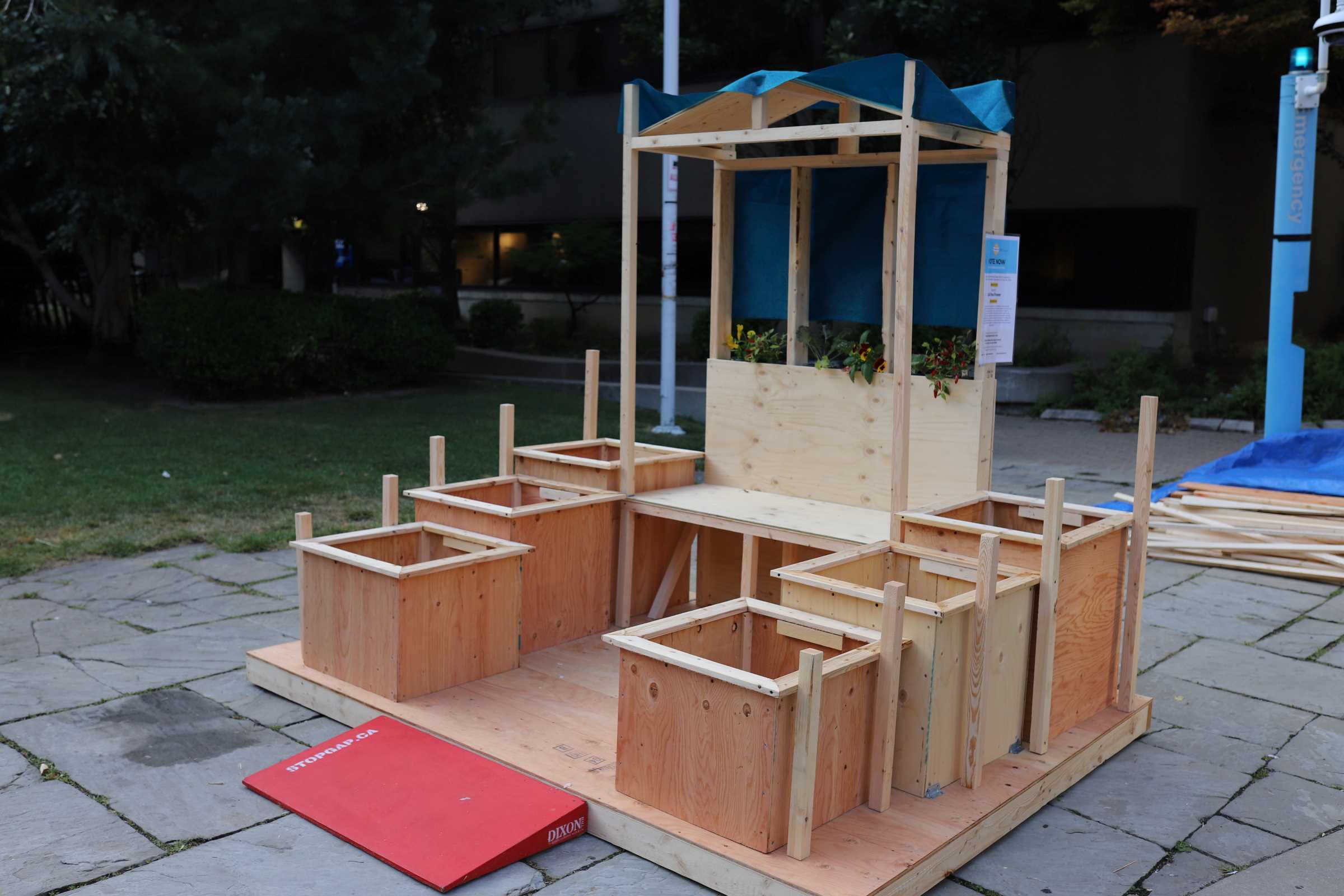 At the end of the weekend, teams presented their designs to the judging panel.