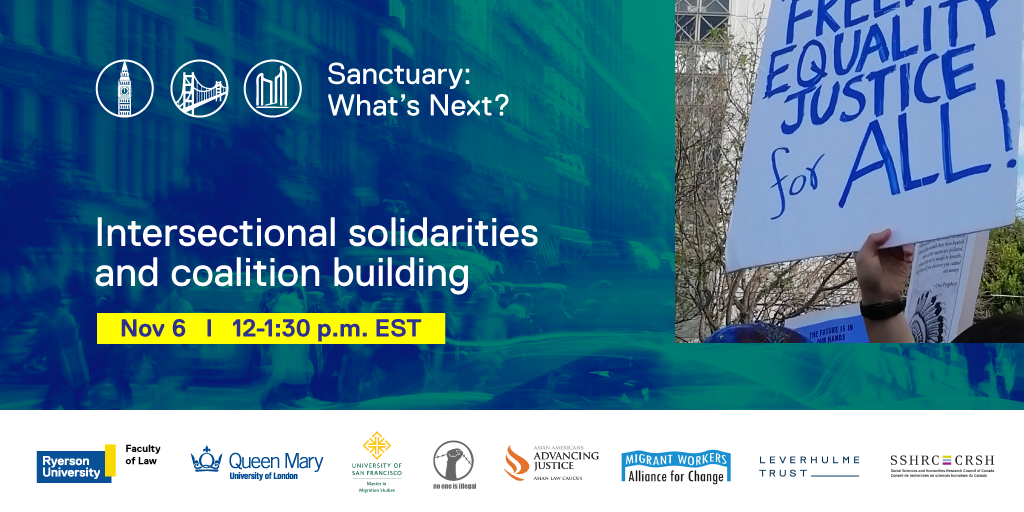 This event is the second in the Sanctuary: What next? series and centres on building intersectional solidarities and coalitions for precarious status residents in cities. Drawing together the expertise of organisers and activists from USA, Canada and UK this event will address how we can build progressive politics across groups and individuals who identify in very different ways but suffer harms and state violence through harsh migration policies. In particular the event will reflect on building coalitions in contexts of resource scarcity and increasing societal divisions. Speakers will reflect on how to centre those who are most marginalised in our campaigns and how to build political consensus at local, municipal, state/provincial and national/federal levels.

Zrinka Bralo is CEO of Migrants Organise a self-help, organising platform for migrants and refugees acting for justice. Zrinka is a refugee from Sarajevo, where she worked with leading war correspondents as a journalist during the siege in the 90s. She is a founder of Women on the Move Awards that celebrates achievements of migrant and refugee women and Executive Chair of the National Refugee Welcome Board set up in September 2015 to organise and coordinate the civil society response to refugee crisis.

Rita Chadha is the Chief Executive of The Small Charities Coalition. She spent 11 years as chief executive of the Refugee and Migrant Forum of Essex and London, before becoming Director of the Migrant Rights Network and chief executive of the community interest company Localising Equality, which aims to help help local authorities work better with refugee and migrant organisations.

Syed Hussan is the coordinator of the Migrant Workers Alliance for Change, and a member of the Migrant Rights Network. He's an anti-racist, migrant justice organizer who supports Indigenous sovereignty. He has worked with No One Is Illegal, the End Immigration Detention Network and the Sanctuary City Movement.

Rev. Deborah Lee became the Executive Director of the Interfaith Movement for Human Integrity in 2018. Prior to becoming Executive Director, Rev. Lee served since 2009 as the Program Director for the Interfaith Movement for Human Integrity (and under its predecessor names: Interfaith Coalition for Immigrant Rights and CLUE-CA). Rev. Lee has worked at the intersection of faith and social justice for over 25 years in popular education, community organizing and advocacy connecting issues of race, gender, economic justice, anti-militarism, LGBTQ inclusion and immigrant rights. She has consistently sought to strengthen the voice and role of faith communities in today’s social movements.

Annette Wong is the Director of Programs at Chinese for Affirmative Action (CAA) where she oversees community initiatives that support low-income, limited-English proficient Chinese immigrant community members to be community and civic leaders, and meet everyday service needs around employment and immigration. Annette has been involved in the immigrant rights movement for over 10 years, working on immigration at the intersections. Annette holds a BA in Sociology, and an MA in Urban Economic Development.