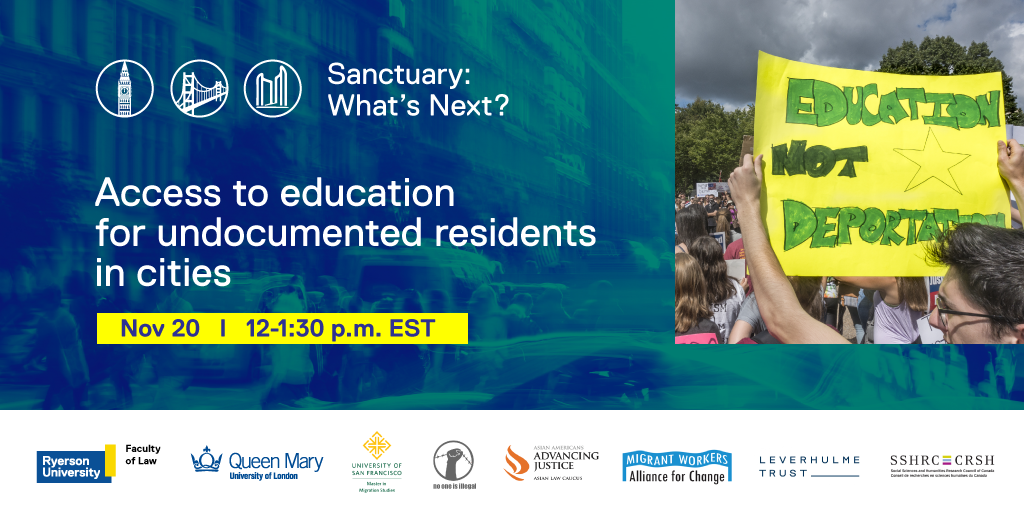 This event is the sixth in the Sanctuary: What next? series and centres on education. Activists, advocates and municipal officers will reflect on the following questions:

1) What types of stories and campaigns have worked / not worked to advance precarious status students in education?

2) What should schools and universities be doing (and what not) e.g. loan schemes, training campus security, peer support, scholarships?

3) What is working well in spaces that have increased access and what needs to be improved?

4) How can we build political consensus with different audiences for campaigns to extend rights of precarious status urban residents to education?

5) What strategies might there be for stopping education being a site of border control through data sharing, security on campus, others?

6) Is there any role for working at the city-level in these campaigns?

Tanya has been working to increase access to education for sanctuary students in different capacities for over five years. She has developed and coordinated community and university-based access to education programs, working with academic and community stakeholders, while focusing on and prioritizing the experiences and needs of sanctuary students. She has also co-authored several pieces based on the need for increased access to education. Tanya has a bachelor’s degree in Political Science from Concordia University, an MA from the University of Sussex in Gender and Development, and a PhD in Gender, Feminist and Women’s Studies from York University.

James has been a community organiser for 8 years. James has pioneered a whole-university approach to organising with King’s College London and has co-founded Parent Power and the Citizenship Payment Plan as part of this. James also leads Citizens UK’s Diaspora Organising Team that focuses on developing leaders of migrant descent and campaigning on issues that are important to migrant and refugee communities.

Kimberly is the Outreach Officer at We Belong. She was born in Zimbabwe and migrated to the UK aged 9. She applied for student finance in 2015 and realised that her immigration status would be a barrier to going to university because it meant she wasn't eligible for a student loan. In the same year, Kimberly attended a Leadership Academy, which provided support and importantly awareness that she was not alone. Through family support, Kimberly began her studies at Canterbury Christchurch University and alongside gained work experience as a Culturosity Facilitator. She promoted youth development through creative learning of equality and diversity principles. Kimberly began her role at We Belong in October 2019, and is dedicated to changing how current society relates to migrants. She wants sustainable justice for the fates of other young migrants like herself.

Angelina is a social worker in the San Francisco Unified School District. She set up and currently leads RISE-SF (Refugee and Immigrant Supports in Education) formerly Caminos. In 2014, in response to the "surge" of asylum seekers crossing the southern border of the United States, SFUSD created the program Caminos, the Spanish word for "journey" or "path," to ensure this community was supported. From the beginning, the mission has been to expand services to include all refugee and immigrant students and families, regardless of nationality or migration experience. After the student led Board of Education resolution, "Undocumented, Unafraid, and United," demanded, among many things, the creation of a centralized resource to support undocumented youth, RISE-SF was founded. RISE-SF offers advocacy, consultation, staff training, and coordination of student services.

Brantella Williams is a 3rd-year Political Science student at York University and an active member of the S4 Collective since its creation. In addition to being a student, she is also a workshop facilitator for the People for Education (PFE), in partnership with the Students Commission of Canada (SCC). She has also completed numerous Equitas workshops, including “Speaking Rights,” and hosted numerous virtual workshops with S4 Collective. Her four-year-old daughter Aaliyah is her constant motivator. Brantella enjoys listening to soundtracks of movies, watching period pieces, and exploring natural landscapes. A quote that Brantella lives by begins, "You cannot take your freedoms for granted. Just like generations who have come before you, you have to do your part to preserve and protect those freedoms...”- Michelle Obama

‘No Soy Other’ – A Spotlight on Latinx young people in the UK, external link, opens in new window

PDF fileNormality is a luxury – A report by young migrants about life on the Home Office’s 10-year route to British citizenship, external link, opens in new window