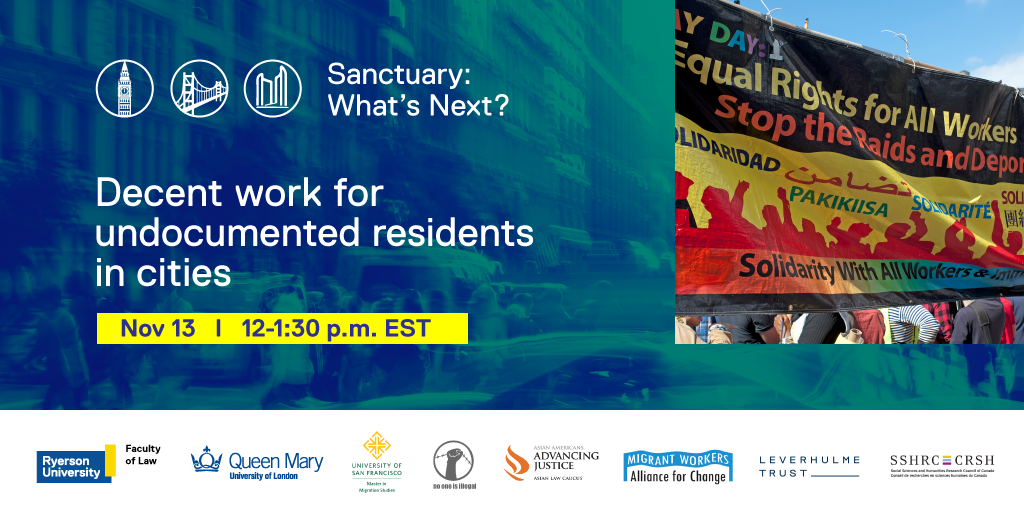 This event is the fourth in the Sanctuary: What next? series and centres on decent work for urban residents with precarious migration status . The expert panel from across Canada, Europe and the USA will reflect on their different campaigns and how they have advanced work place rights for workers with precarious status; what kinds of narratives work in different spheres to build solidarity among and between workers and how they have built popular and political consensus. The panel will also address what strategies they have used and the opportunities and challenges of working at local, municipal, regional, national and international scales.

Karen is the projects and campaigns coordinator for Migrant Workers Alliance for Change, Canada.

Don Flynn was the director of Migrants' Rights Network (MRN), a network of civil society organisations working to support the rights of migrants. He helped found MRN after 30 years' work on migration issues in law centres and as a policy officer at the Joint Council for the Welfare of Immigrants and an immigration caseworker in London. He also chaired the UK Race and Equality Network (UKREN) and the Platform for International Cooperation on Undocumented Migrants (PICUM).

Lilana joined PICUM in 2011 where she is a senior advocacy officer focusing on labour rights. She has been involved in work to advance migrants’ rights since 2009, including through community development and funding. She has an academic background in international and European migration law and policy and anthropology.

Elene Lam has been involved in the sex workers’ movement for more than 15 years and she co-founded Butterfly after moving to Canada from Hong Kong in 2014. Butterfly is a support network for Asian and migrant sex workers to address the unique challenges they face working in Canada – particularly within the context new anti-sex work legislation that criminalises the purchase of sex, advertising sexual services, and communicating in public.

Dolores Modern is Policy and Communications Coordinator on Employment Rights at the Latin American Women's Rights Service (LAWRS). She has a background in Political Science, Human Rights and Modern Slavery, and over 10 years of experience working in the women's sector. LAWRS is a feminist and human rights organisation led by and for Latin American migrant women in the UK. LAWRS supports women and girls facing violence, exploitation and trafficking, and those enduring difficult living and working conditions in low-paid jobs and facing barriers to social protection.

Lisa has been organizing for low-wage worker power for over 20 years. She currently serves as Senior Field Director at the National Domestic Workers Alliance (NDWA), the nation’s leading voice for fairness for the more than 2.5 million nannies, housecleaners and home care workers in the United States. Lisa oversees the alliance’s work to build domestic workers’ collective power by growing a mass base of individual members and over 70 local chapters and affiliate organizations, and by aligning that base around a shared strategy and vision for the sector. Her work includes initiatives to seed and strengthen local organizing, development of political education programs, digital organizing efforts to recruit and engage members at scale, and the construction of leadership pipelines and systems for worker democracy. As a member of NDWA’s strategic leadership team, she co-designs a coordinated set of strategies to raise standards for the sector, including legislative campaigns, innovation and culture change work. Prior to her current role, she served as the Organizing and Program Director for NDWA’s gender and immigration campaign, where she coordinated a diverse national network to fight for the rights and dignity of immigrant women, children, families and communities. She began organizing in the mid-1990s at Mujeres Unidas y Activas (MUA), an NDWA affiliate in the San Francisco Bay Area. As MUA's as Co-Director, she built programs and practices for the organization’s membership of low-wage migrant women to powerfully lead, both in external campaign work and in the internal operations of their own organization. A dedicated community-builder, Lisa spent a number of years co-developing and coordinating a vibrant café and organizing space in Vancouver, Canada. Now, as a parent, she learns every day by supporting her child to grow and lead, with purpose and love.

PDF fileButterfly: How are Asian and migrant workers in spas, holistic centres, massage parlours and the sex industry affected by the COVID-19 pandemic?, external link, opens in new window

Platform for International Cooperation on Undocumented Migration A worker is a worker, opens in new window

Status for All Campaign, opens in new window