The present and future of the Global Compacts

Practitioners extolled the adoption of the Global Compact for Migration (GCM) and the Global Compact for Refugees (GCR) in December 2018 as a critical milestone in migration and asylum governance. Yet to be truly considered a milestone, the two Compacts must overcome shortcomings: (1) the many competing priorities due to the divergent interests of the endorsing states, and (2) the lack of an enforcement mechanism that could hold states accountable.

Participants took stock of how the GCM and the CGR were implemented to address these shortcomings and examined the future of the two Compacts in the post-pandemic world. While the COVID-19 global pandemic, as well as the Afghanistan and Ukraine crises, stressed the need for global cooperation on migration and asylum, it also resulted in a range of challenges that could limit the relevance of the Global Compacts. As the states favoured imposing unilateral restraints on mobility through the pandemic, some sectors relying on circular temporary labour migration saw large, possibly unprecedented, restrictions in mobility and massive layoffs of migrant workers. The hypermobility that was foreseen earlier came to a complete standstill during the pandemic, resulting in crisis-returns that therefore contradicted the GCM’s aim to facilitate safe, orderly and regular migration. On the other hand, the refugee emergencies proliferating around the world including, for instance Venezuela or Central America, make the GCR all the more relevant and needed.

This workshop aimed to address the following questions:

Please check back for event recording. 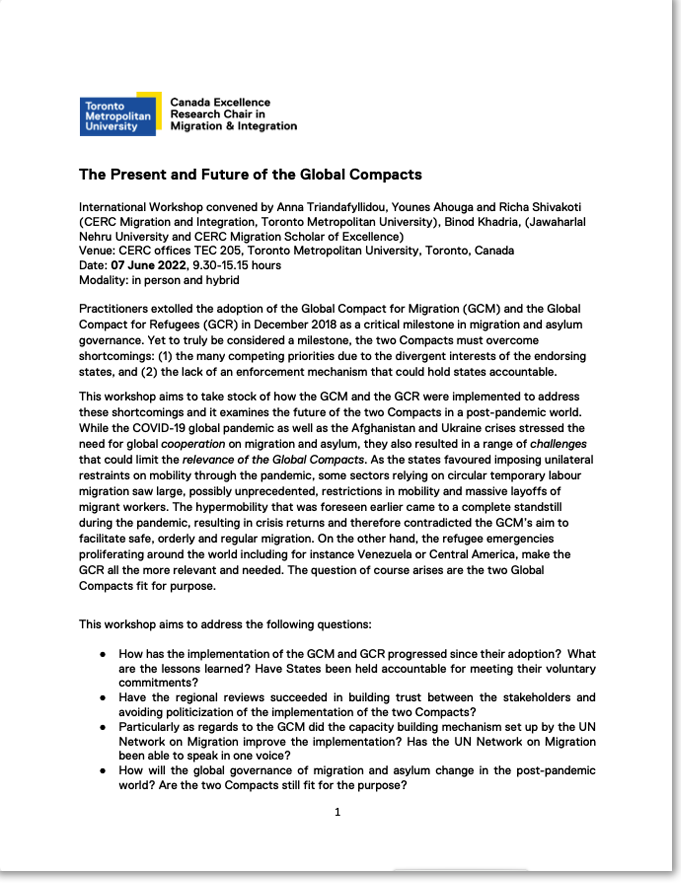