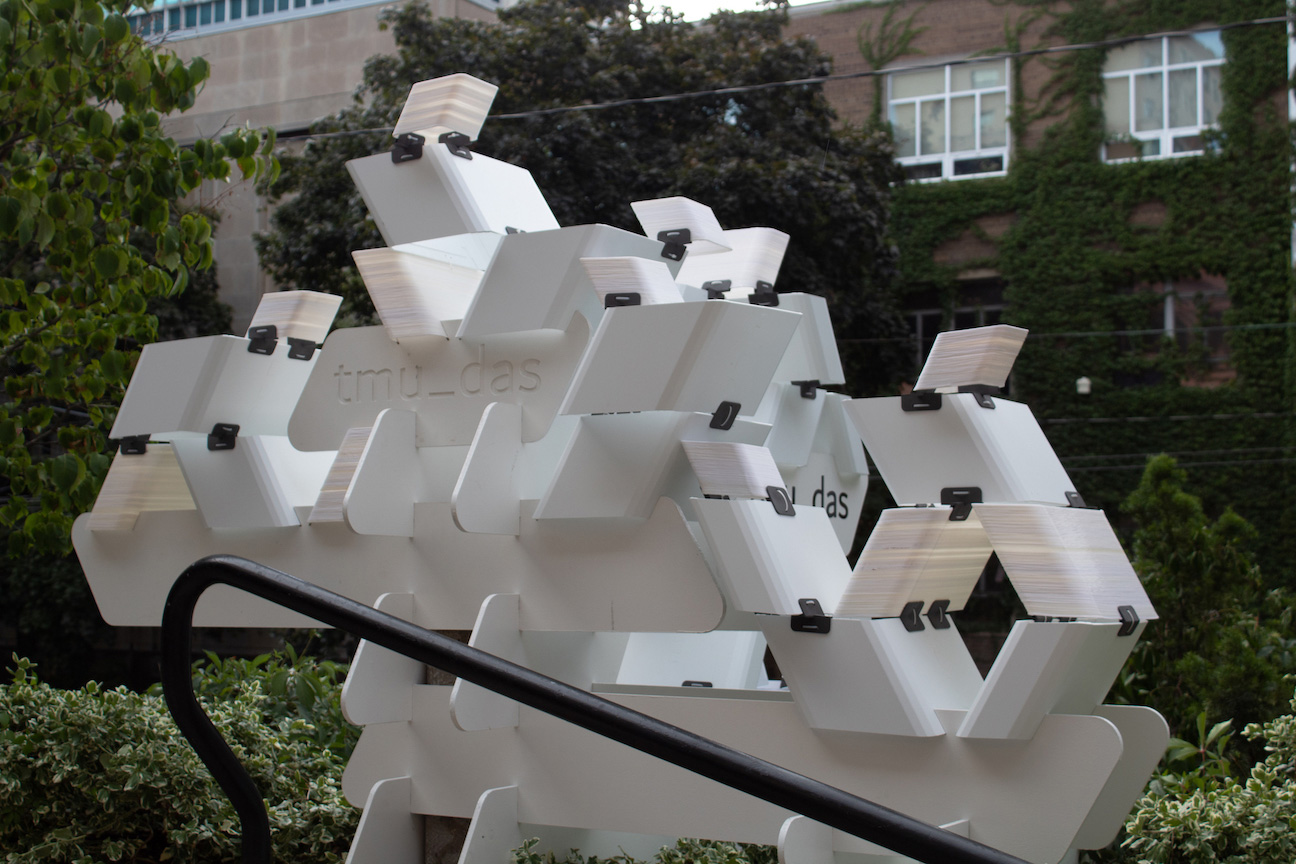 The newest addition to the Department of Architectural Science building sits on top of concrete remnants on the edge of the main entrance. Coated with a chantilly-lace white, the modular sections are joined by intricate slots, all sandwiched together to form a centrepiece for visitors old and new. Clean-lined, geometric, and almost sequential in build, the 3D printed and laser-cut structure ripples of mid-day light. Despite its sleek design and contemporary form, the piece itself reflects a more elemental and atmospheric matter.

When asked what they would name the piece, a singular descriptor came to mind: a cloud. The Cloud, Head in the Clouds, A Cloudy Collage, and The Cumulus, were all suggested names for the structure by students. Perhaps it’s the repeated bunches and clusters, the softened edges, or the caricature cloud-like white of the piece that echoes the clouds above; regardless, one thing is for certain, the Cloud is now a signature of DAS. 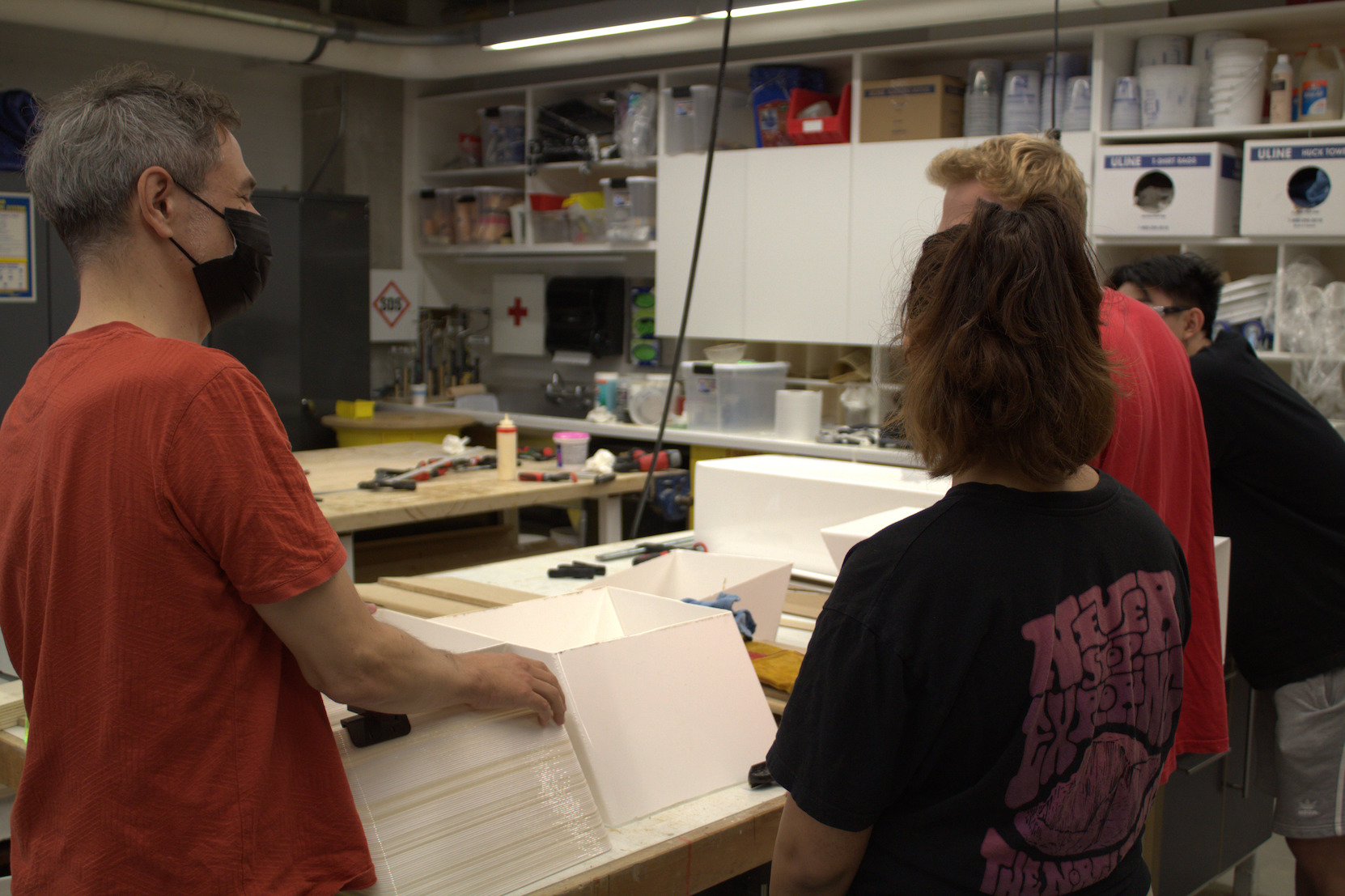 The project, facilitated by Professor Will Galloway, was initially planned as a segment of a studio course. Unfortunately, due to COVID-19 restrictions, the original intentions of the design-build had to be restructured. Instead, the plan was redesigned for the 2022 summer term. Professor Galloway explained that the intentions for the project were twofold: to test digital fabrication equipment available to Toronto Metropolitan University, and to have a project where students could participate and cooperate in both the design and fabrication process.

Gabriel Garofalo, a current Master of Architecture student at DAS, says his research “looks at the potential to enhance architectural character through the use of place-based knowledge in the digital fabrication process.” When Gabriel met with Professor Galloway to discuss possible thesis subjects, Professor Galloway revealed his plans for the design-build project. Gabriel then joined the team, explaining that his role focused primarily on “collecting research, curating digital design iterations, and prototyping.”

Treya Vyas, a recent graduate, was then a fourth year undergraduate student. When introduced to the project, Treya was tasked with the coordination of students, and the sourcing of funding for the build. She then brought together a team of students ranging from first year to fourth year to help design, prototype, and build the Cloud.

As for the stages of building, “for the preliminary part, it was just site studies. Then going off that, it was doing tests, either physical tests, or model studies,” remarks Treya.

After preliminary testing, design and prototyping were conducted simultaneously. With the help of the workshop at DAS, including the aid of workshop manager Jordan So, and workshop technicians Jason Ramelson and Filip Tisler, work began on the prototypes using the CNC machine.

Testing various materials, how to piece together the structure, and adjusting the scale, the angle, and the sizing, were all part of the early stages of the design process. 1:1 models were also made to study the structural foundations of the build.

While students created small pieces with the robots, this unfortunately had to come to a pause as technical issues arose from the humidity and heat of the summer weather. During this time, the students turned to other alternatives, including acrylic bending, and scoring and folding PVC pipe material as potential possibilities. 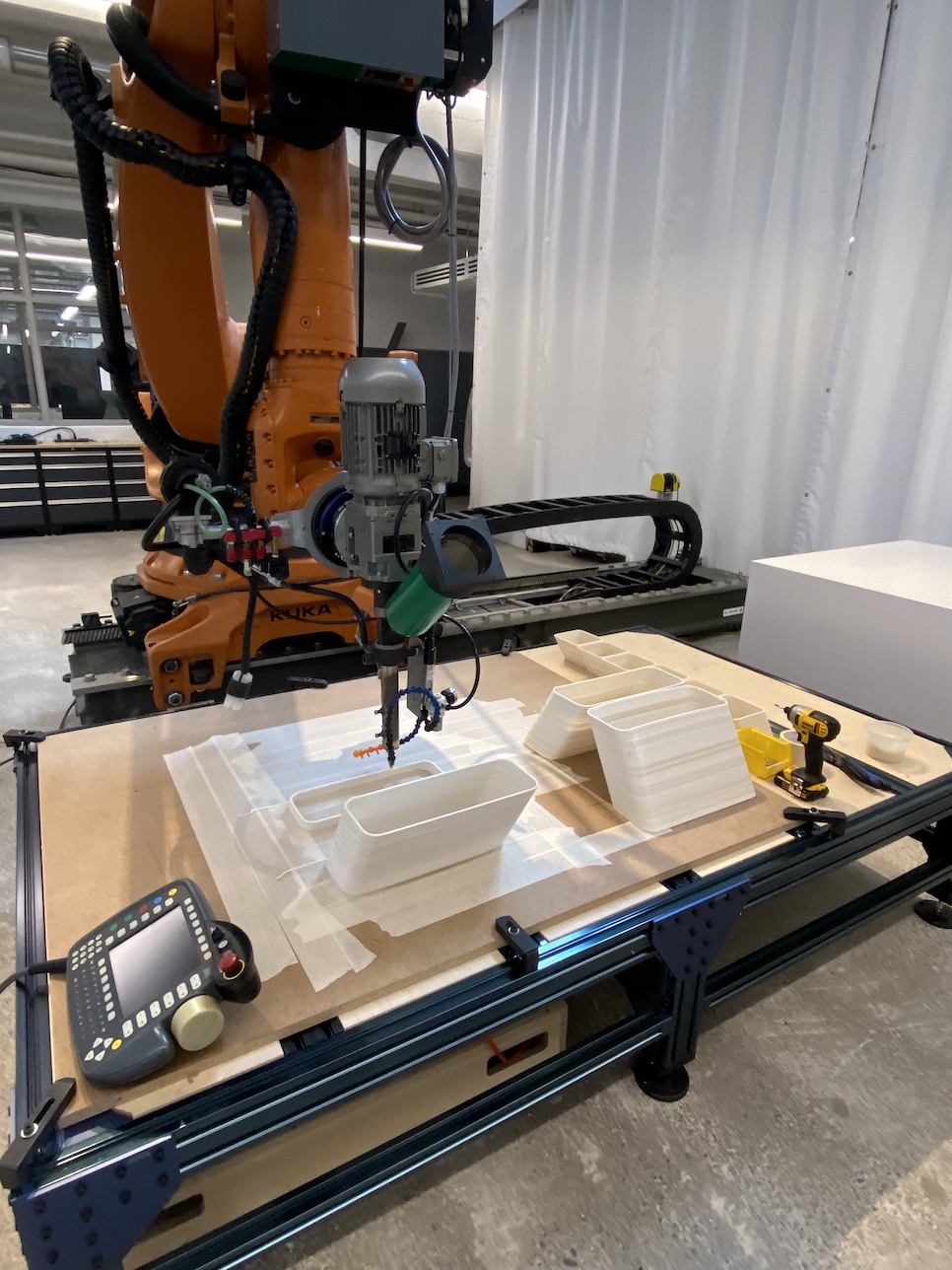 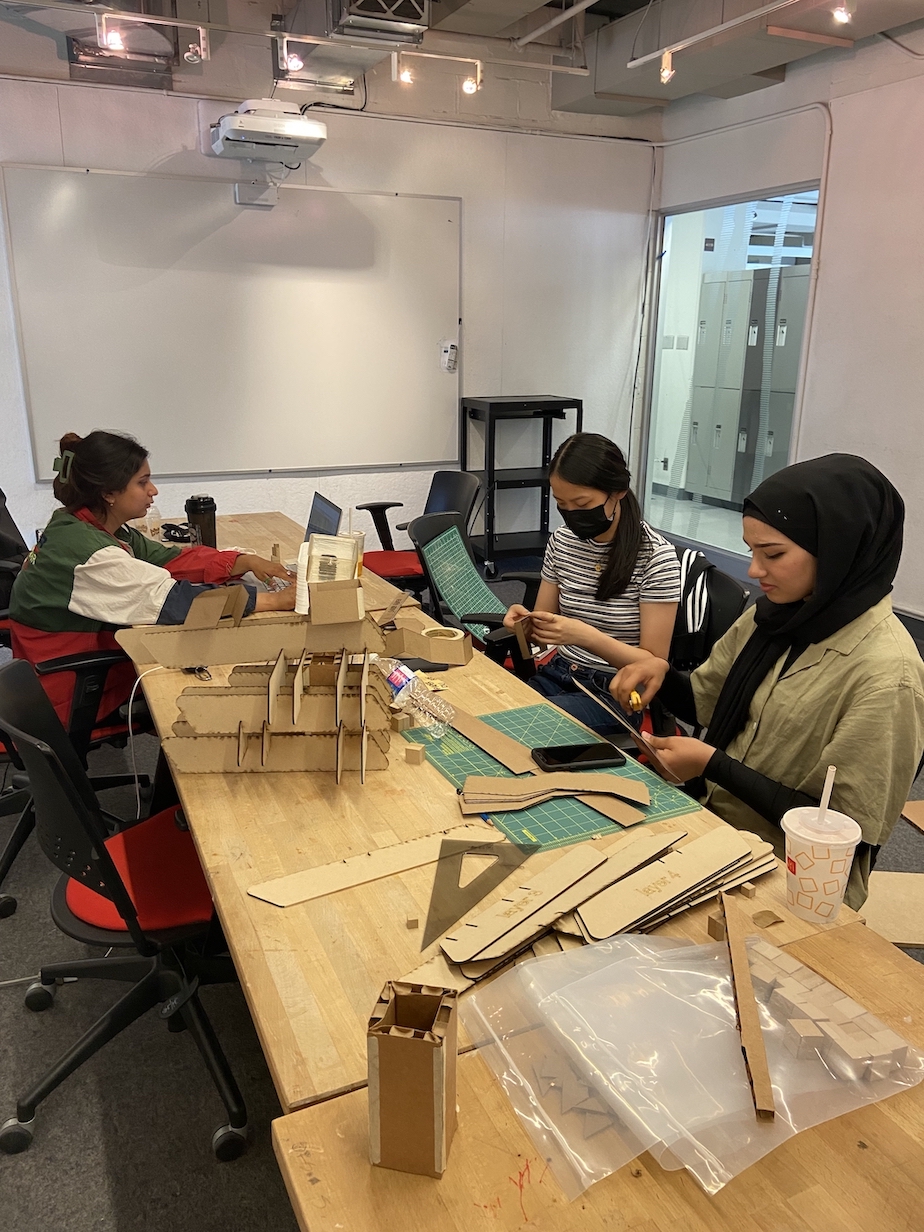 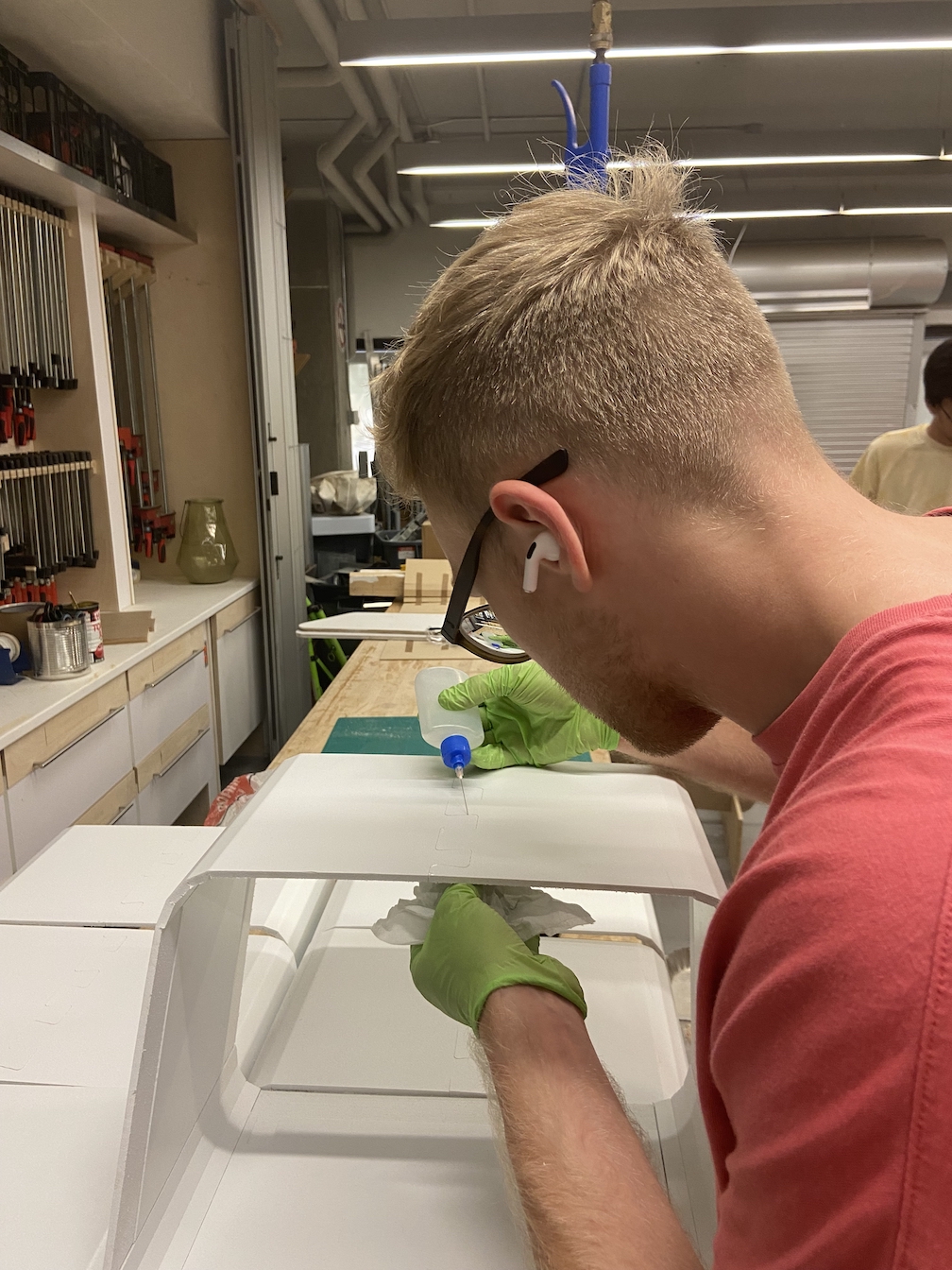 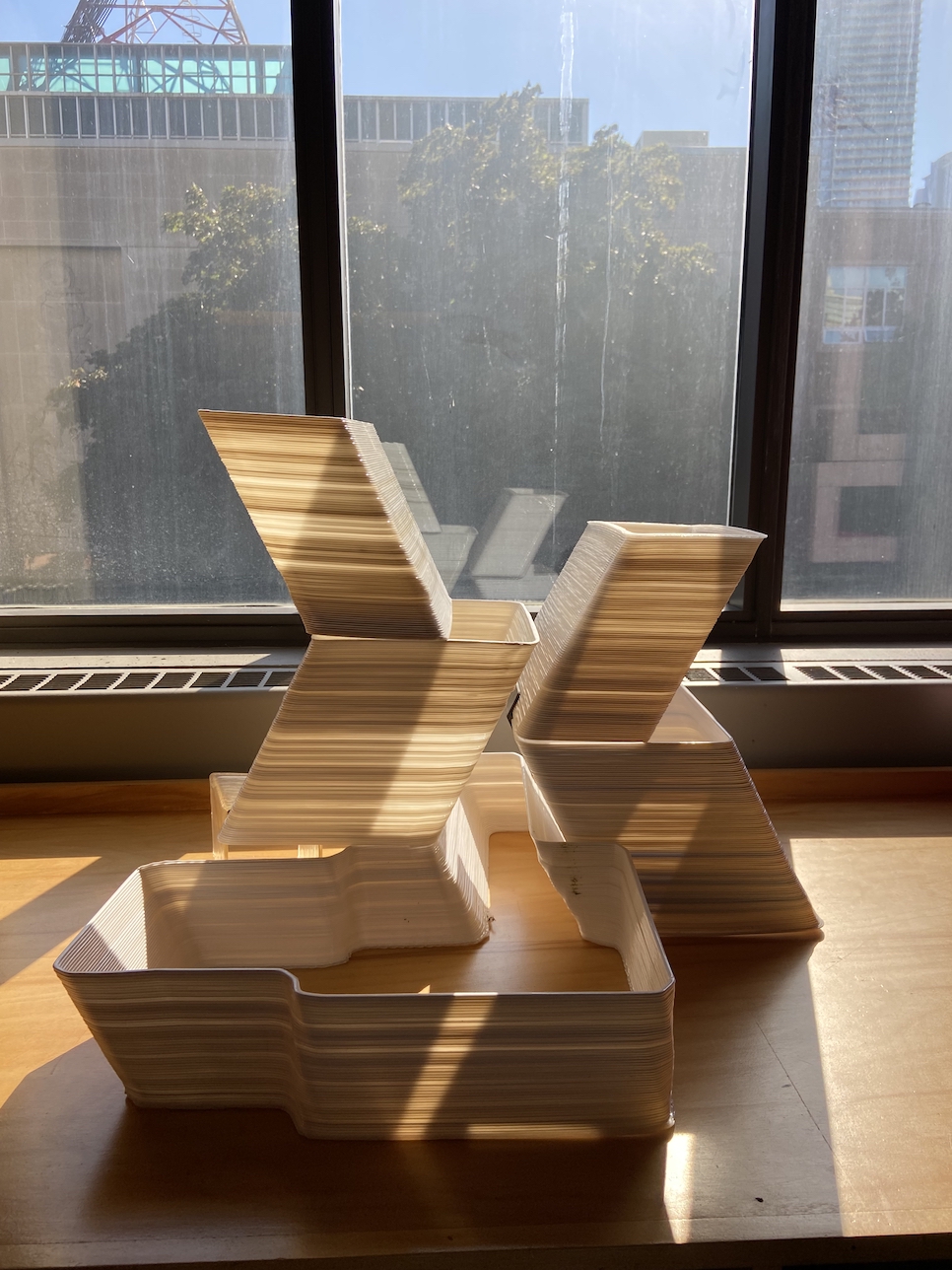 “Prior to this experience I was clearly not aware of all the full abilities of 3D printing, and upon working with Mies Van Der Robot–the giant robot arm– seeing the scale it was able to print at, I was surprised by the capabilities and potential that fabrication could bring to the industry. [...] I can see digital fabrication breaking the barrier of a traditional method of building in the near- future, with 3D printed concrete becoming more prevalent as a building technique. I'd like to see even larger-scale builds being built with digital fabrication,” says Leshin.

Similarly, Samantha recounts the experience saying that “although digital fabrication has its pros and cons, its ability to accurately produce complex models that we designed has huge potential within the future of digital fabrication in architecture.”

Drawing on his thesis research and involvement in the project, Gabriel looks to the future of digital fabrication as a supplementary tool for architects, noting that “digital fabrication allows designers the ability to embed specific inputs that enhance the built form, such as physical site conditions, connections to the social context, and the local materiality. With that in mind, architects and architecture students will not give up tactility and physical design mediums, but rather gain a greater physical connection to their designs.”

After working with digital fabrication tools for a summer, Treya considers that while numerous challenges occurred, the ability to fabricate and see the physical structure, regardless of size, is a great instrument for promising architects. She remarks that “[...] they’re a lot better than 3D models because you can physically see your building, and so you can physically see the space.”

Professor Carlo Parente, who joined the project as an additional faculty supervisor, was also acknowledged by Treya. “One of the things that Carlo mentioned during our build was that we should be part of the process, not because we’re there and able to make it happen, but because we’re able to resolve these issues in the process. To design something and see it come to life is something really important as a skill that every student should have.” This idea, of visualizing and creating a physical embodiment to test structural variants, is perhaps best illustrated through the digital fabrication tools the students experimented with. 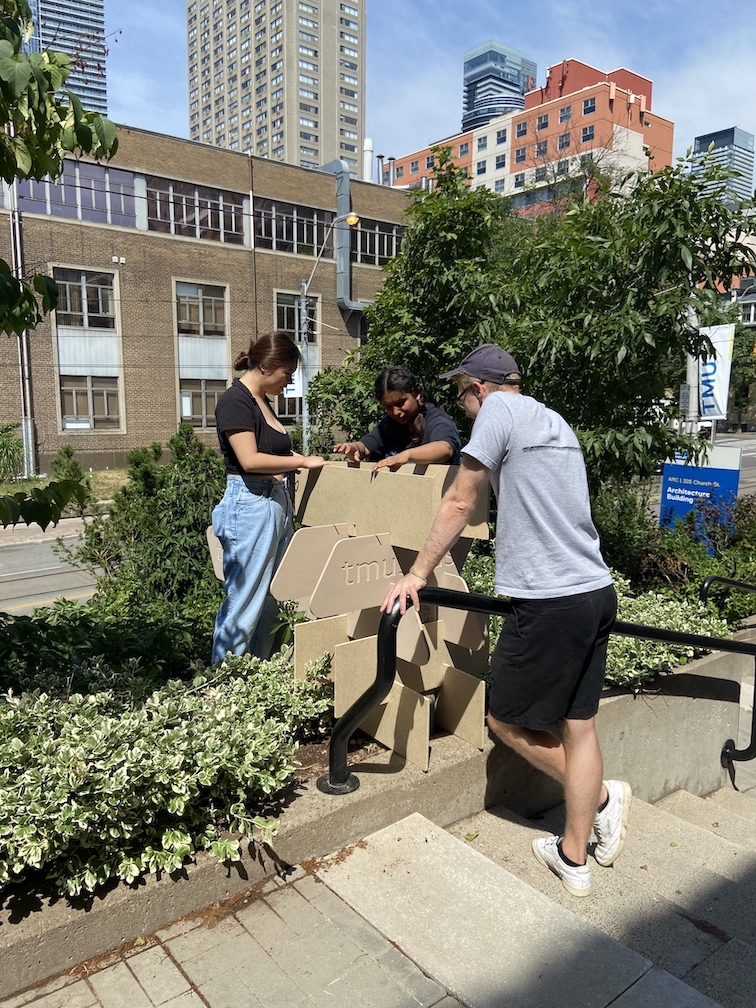 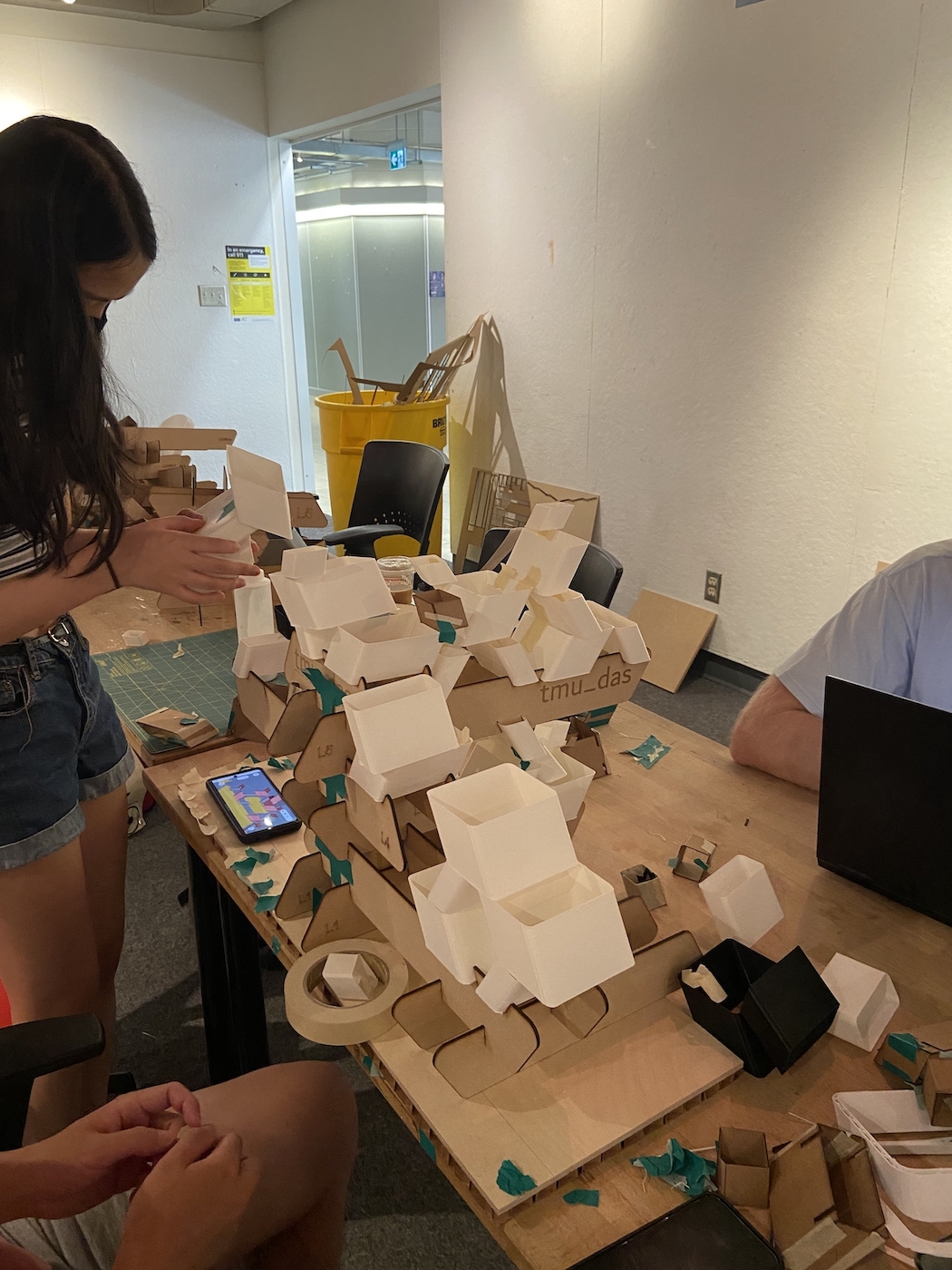 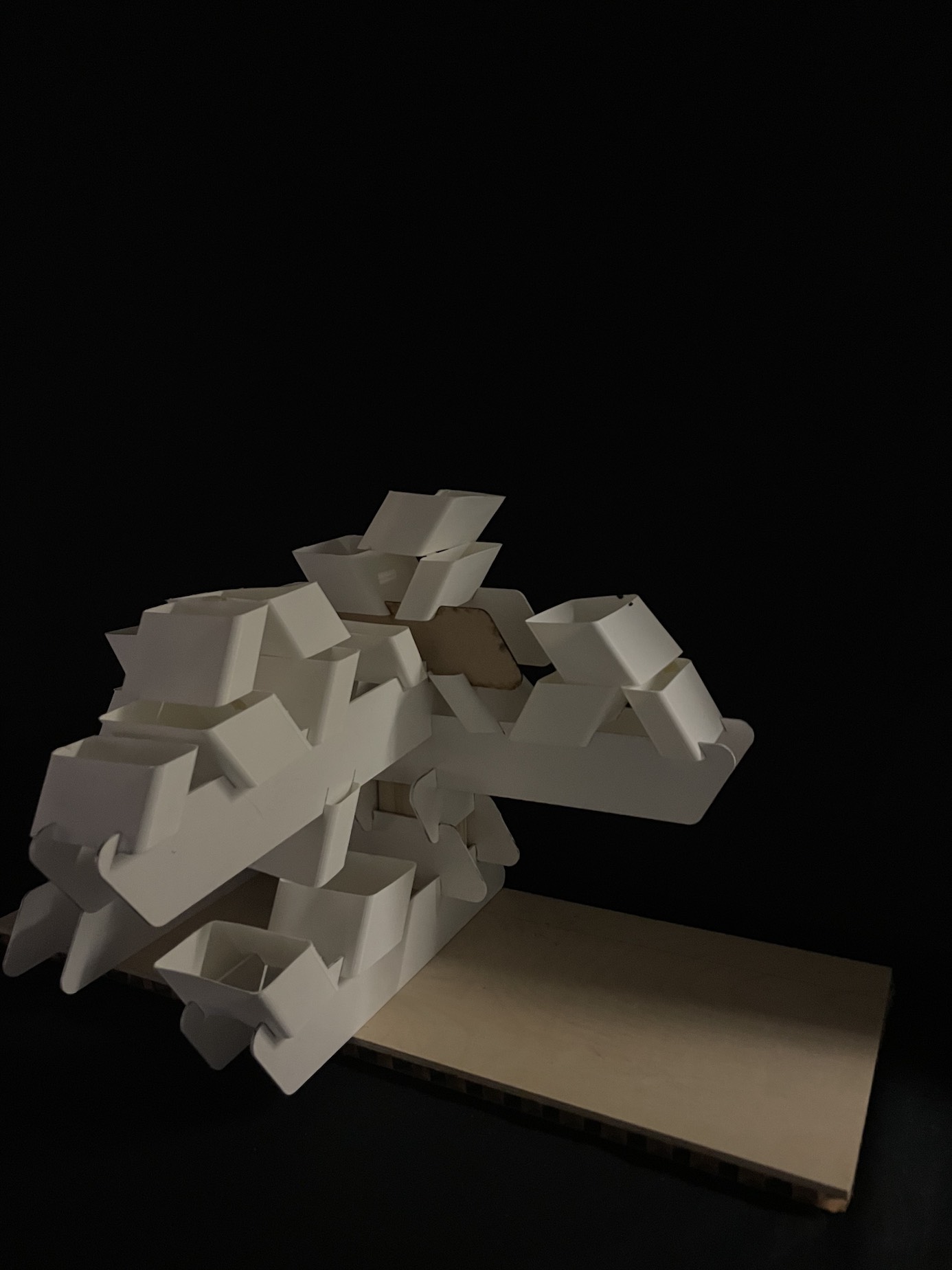 Nearing the end of the build, students sanded, primed, and painted the 3D printed forms, and laser-cut panels. As for securing the structure, Treya recounts the trials and errors the team faced. “We put the clips together in each block, then we screwed a hole and ran a zip tie through–that was our simple solution to put the block together. It was very simple and easy, even though we tried to figure it out for a while. [...] While it looks randomized, where the blocks went were all strategically placed.”

Finally, near the end of summer and at the cusp of the new school year, the build was moved to its final site. 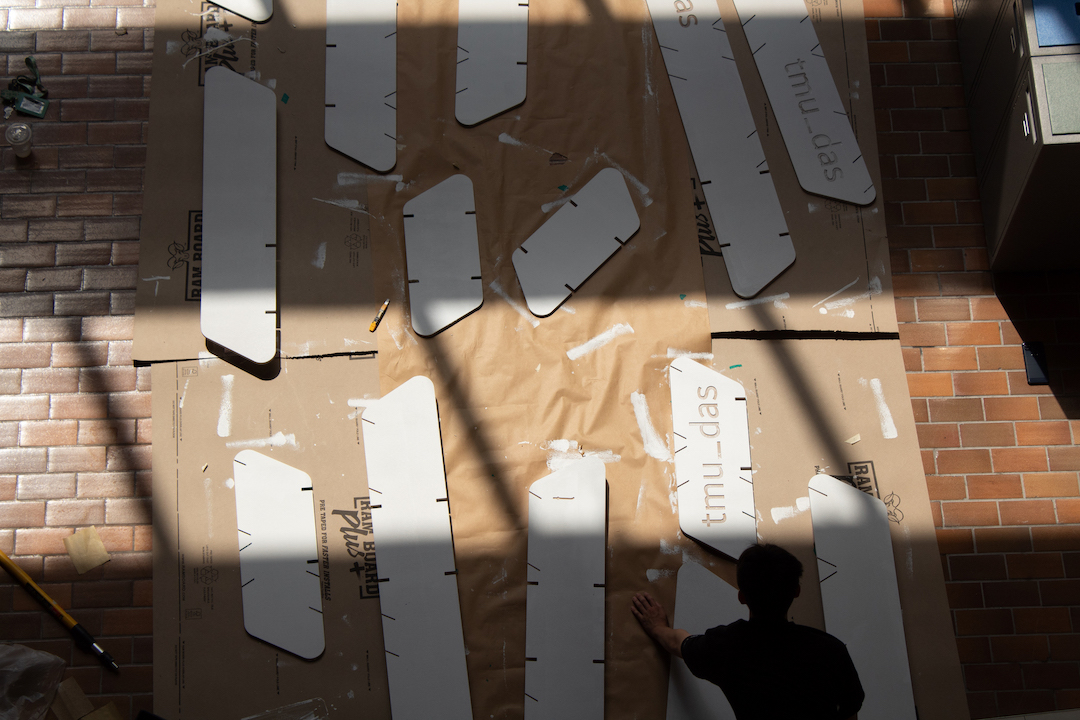 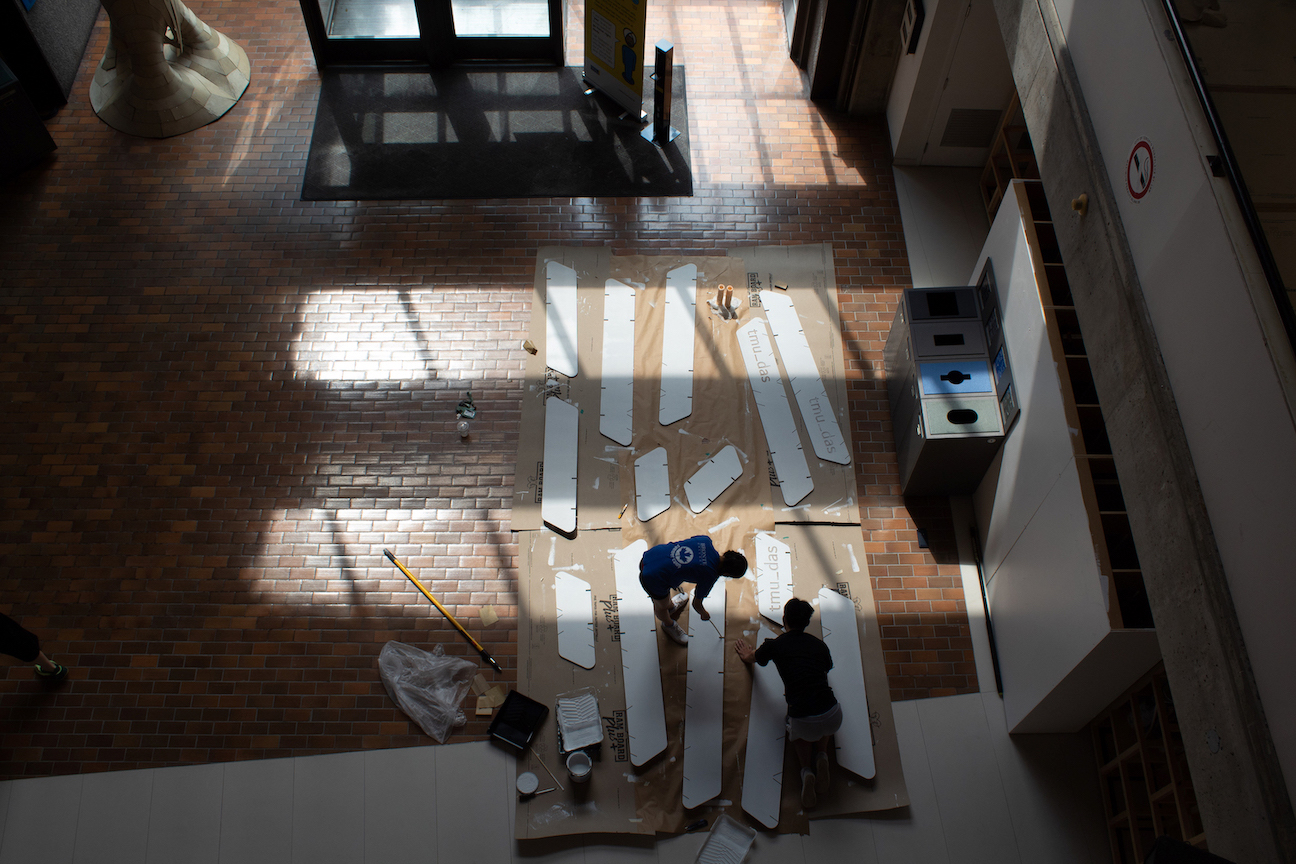 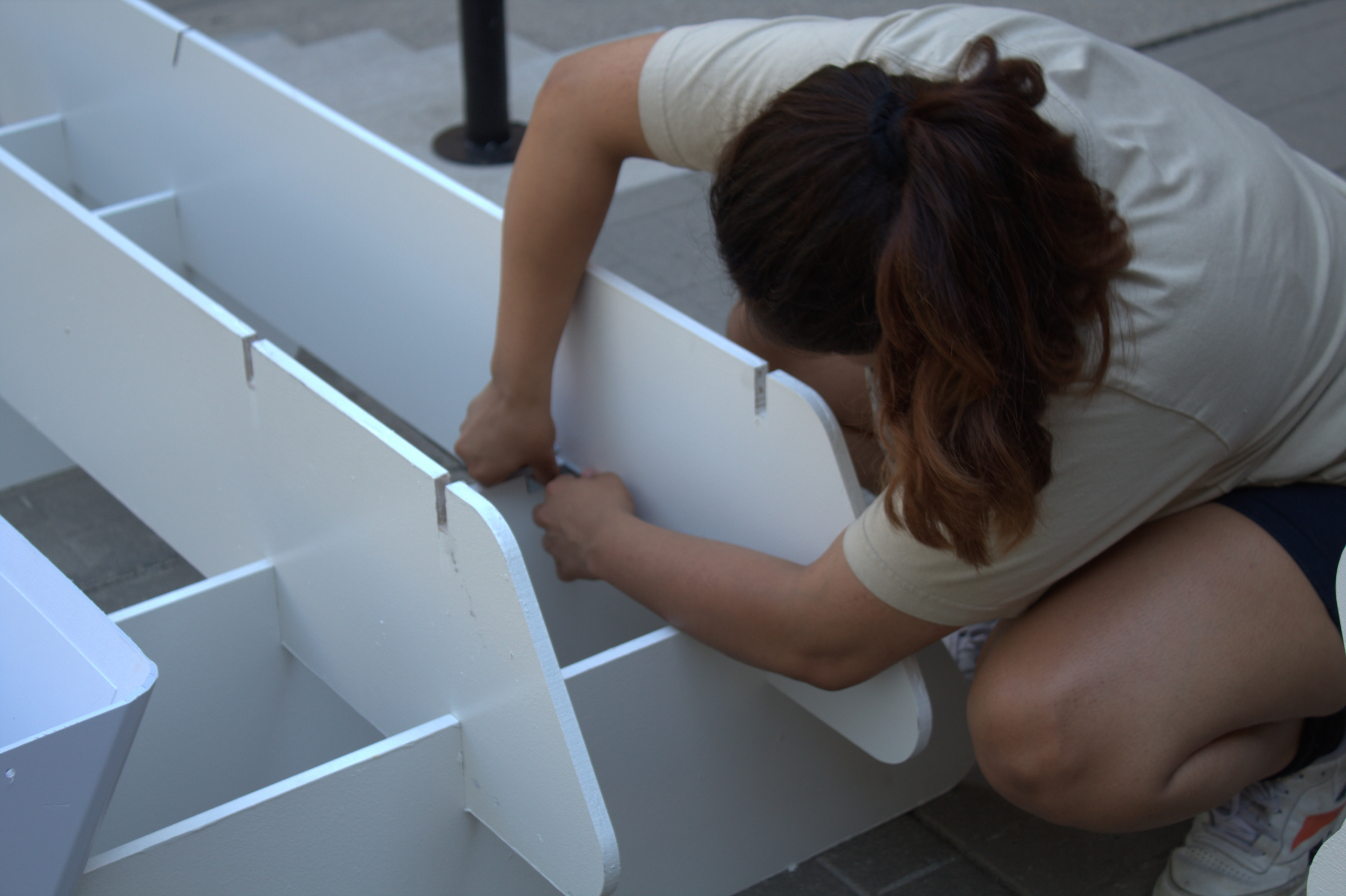 Reflecting on the design-build experience, we asked the students who and what they thought were instrumental to the Cloud’s construction. The responses varied from staff, faculty, courses, to various machinery used.

Gabriel noted that “the workshop team at DAS were crucial in the execution of the project. They supported our explorations into Robotic Fabrication, 3D printing, and CNC milling. Their knowledge and advice allowed for various explorations into different methods, tools and materials. Also, the workshop team provided insight and tips on how to execute the fabrication goals our project team was striving for. Specifically, how to digitally plan and model our components to save time, and increase the quality of the end result.”

Leshin and Samantha shared similar thoughts, both noting the support of faculty and staff as crucial to the process. Samantha shared that “being introduced to new fabrication tools such as the sinter printer, and learning to use the laser cutter and CNC machines was an invaluable hands-on experience– especially since we had previously only worked with hand-tools or cardboard due to virtual classes.”

The digital fabrication tools for the Cloud project also expanded beyond the DAS building, with students experimenting with 3D printing with the KUKA robot with an extruding arm. The operations of the KUKA robot, located at the LAB, opens in new window within the Creative School, was assisted by the LAB’s director, Professor Jonathon Anderson, opens in new window, who aided and trained the students.

Finally Treya, a new graduate of DAS, reflected on several courses which she drew influence and precedents from.

“I think when I was in the courses, I didn’t understand how big of an impact it would be. Because DAS has the ability to be technical, I think the courses here give you an insight in a way a lot of other institutions might not be able to.

Just to name a few great courses: Arthur Wrigglesworth’s Tectonics and Materiality (ASC 621) course in third year, Carlo Parente’s Principles of Detailing course (ASC 623), and Kevin Stelzer’s Sustainable Detail Design (BSC 821) course in fourth year gave great perspective on how details and things come together. I think Vincent Hui is also a great professor and resource when it comes to digital tools. I also think that courses that look at the larger structure of the city, such as Will Galloway’s urbanism course, which looks at Japanese architects and their response to site and design, really speak volumes.

I think we also looked at one of those designs as a precedent for this build as well, so it was really interesting to see issues that other designers see and resolve, and how that could be used in this project.” 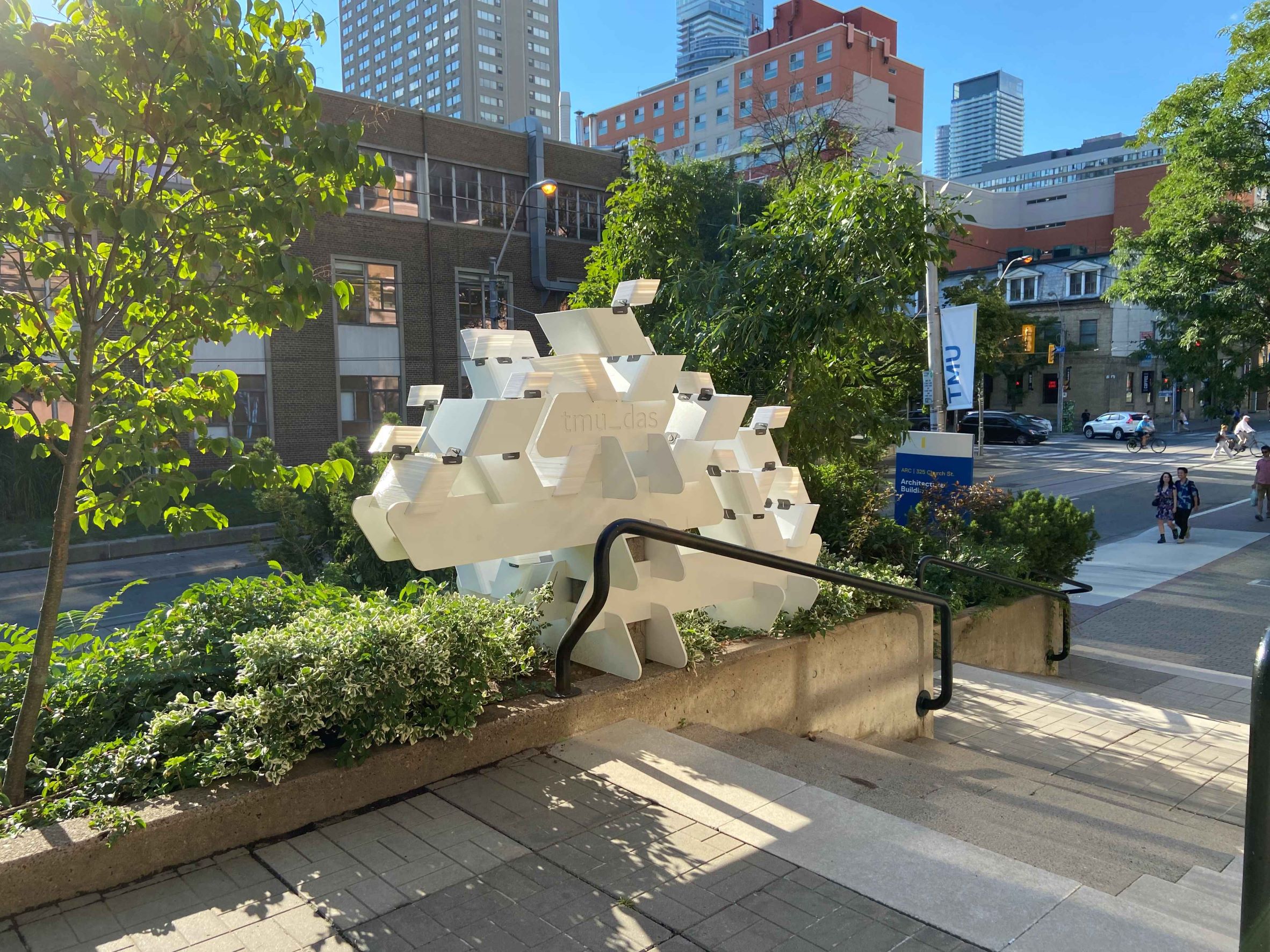 The Cloud sits on the edge of the concrete steps of the main entrance, resting against Church Street’s urban landscape.