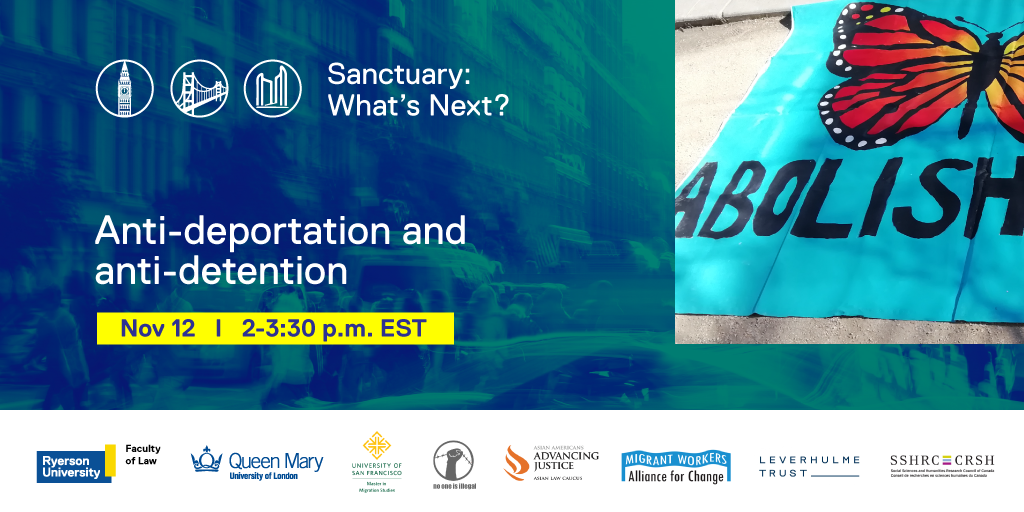 Mac Scott, No One Is Illegal Toronto and Carranza Law, Canada

This event is the third in the Sanctuary: What next? series and centres on anti-deportation and anti-detention. An expert panel of speakers from across Canada, USA and UK will reflect on the increasing entwining of migration and criminalisation and how they have countered such policies, practices and narratives in their respective contexts. They will review how interoperable databases and surveillance technologies are currently affecting marginalised and racialised urban residents. The panel will also reflect on the prospects of abolitionism as an organising frame and what opportunities and challenges there are to working with different levels of governance for progressive policies.

Souheil Benslimane is a father and an illegalized and criminalized migrant who is currently awaiting imminent deportation to Morocco. After serving a federal sentence and being released from immigration detention in March 2018, Souheil became involved in abolitionist, as well as prisoner and migrant justice organizing as a member of the Criminalization and Punishment Education Project (CPEP), a member of the Ottawa Sanctuary City Network (OSN), and the Coordinator of the Jail Accountability and Information Line (JAIL). His first peer-reviewed article, co-authored with David Moffette is entitled “The Double Punishment of Criminal Inadmissibility for Immigrants” and appeared in Volume 28(1) of the Journal of Prisoners on Prisons.

Angela Chan is the policy director and a senior staff attorney managing the Criminal Justice Reform Program at Advancing Justice–Asian Law Caucus. Angela began her work at the ALC in 2006 with a Soros Justice Fellowship, challenging language and cultural barriers impacting immigrant youth and families in the juvenile justice system. Since 2008, Angela has focused on defending and passing Sanctuary Ordinances to limit local and state law enforcement entanglement with immigration enforcement. She co-authored and collaborated with the ICE out of CA statewide coalition to pass the TRUST Act to limit responses to ICE hold requests, the TRUTH Act to require local law enforcement to provide consent forms prior to interviews with ICE, and most recently the CA Values Act (SB 54), which is the strongest and broadest Sanctuary state law in the country. Angela was named a Local Hero by the San Francisco Bay Guardian, given a Monarch Award by the Pacific Asian American Women Bay Area Coalition, selected for a 40 Under 40 Leadership Award from the New Leaders Council, and named a Best Under 40 attorney by the National Asian Pacific Bar Association.

Sam started at Liberty at the start of 2018 and works on ending immigration detention, protecting the Human Rights Act, mental health and military justice issues. Before joining Liberty, Sam was Campaigns Manager at René Cassin where he engaged and mobilised the British Jewish community on immigration detention, discrimination towards minorities, and modern slavery issues. He also was a volunteer for Rights Info and a founding trustee of the Advocacy Academy. He holds a Masters in Human Rights from the LSE.

Mac Scott is Carranza LLP's immigration consultant. Over his 20-year career working with immigration, Mac has accumulated several high-profile immigration cases in his arsenal and has been able to support organizing around migrant justice and poverty using his immigration legal skills. Mac became an activist at the age of 21, participating in anti-war campaigns and rallying around indigenous solidarity. His passion for justice paved the way for his professional devotion to the legal field when he began working with immigration as a volunteer for the Ontario Coalition against Poverty in 1997, a reverence that continues to this day.

Peninah is an anti-racist activist, organiser, and director of the Racial Justice Network and currently undertaking a PhD at university of Manchester focusing on how coloniality shapes Black activism. Born and raised in Kenya, her experiences of discrimination and racism after migrating to the UK became a catalyst for fighting for racial and social justice. The past 12 years have involved working with marginalised communities affected by mental health, homelessness, poverty, addictions, domestic abuse, sex work, destitution, seeking asylum and refuge. The racial justice network is a network of individuals, communities and organisations working together to end racial injustice and address legacies of colonialism. The racial justice network is a lived-experience led and informed anti-racist organisation based primarily in the Leeds City Region and working in West Yorkshire and beyond. The network is informed by a critical intersectional approach that is sensitive to the impact of gender, sexuality, disability, social class, migration status, religion, and other such intersections.