Let the Rivers Flow: A Gathering about Responsive Early Childhood and Community Inclusion 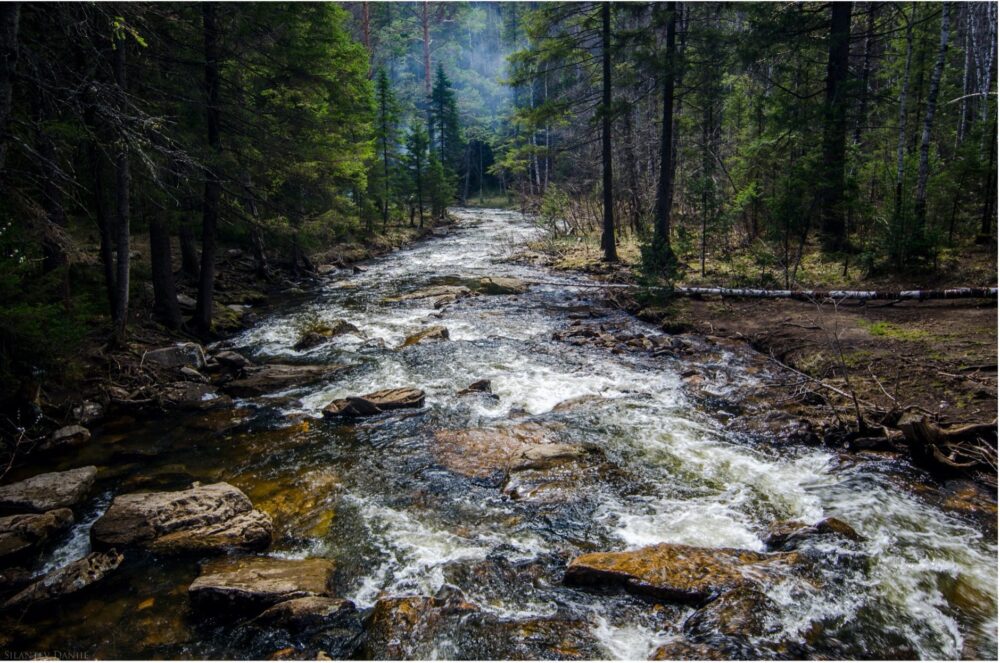 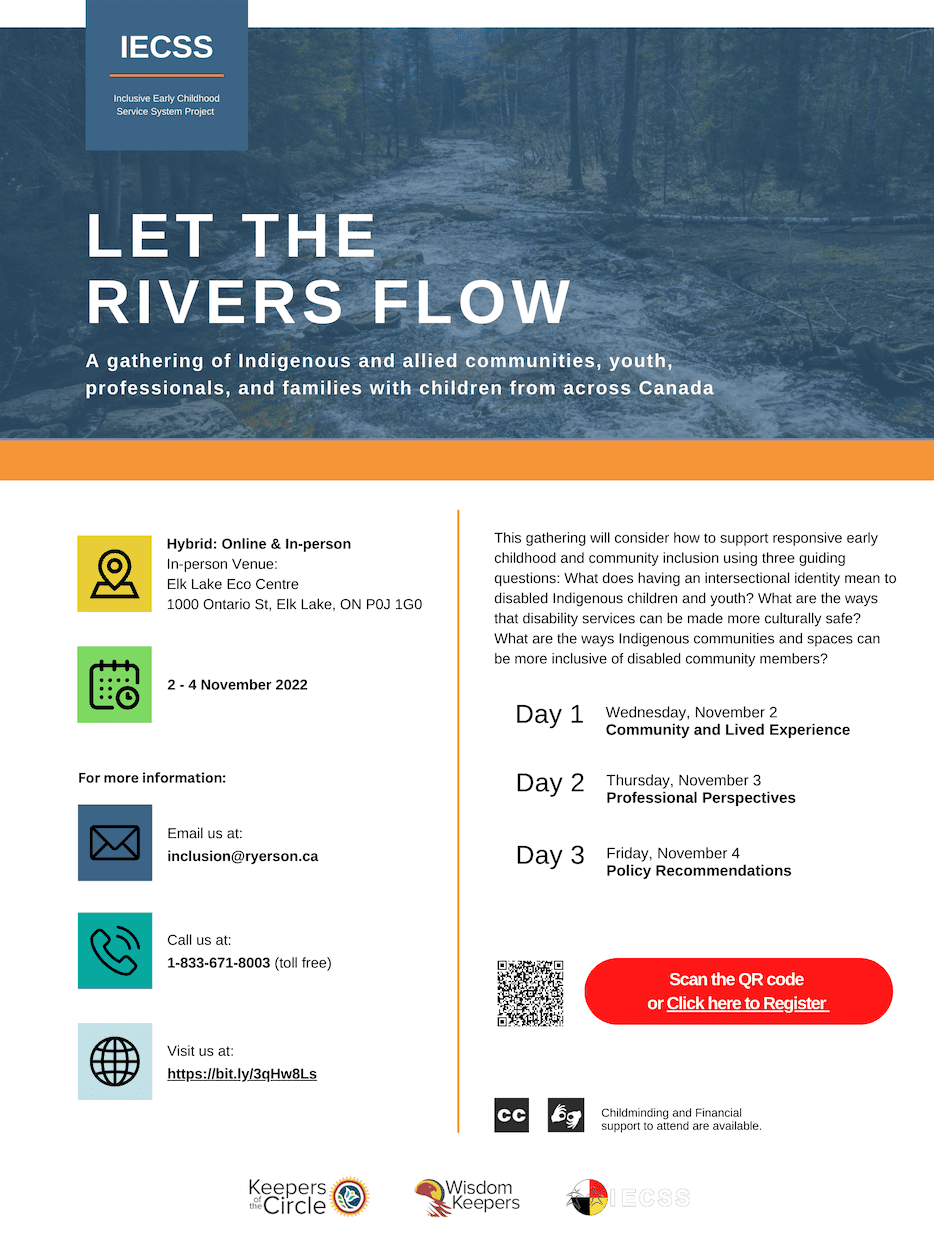 Register for the gathering through eventbrite, external link

We are excited to announce the schedule of events for the upcoming gathering, Let the Rivers Flow. We will gather in person in Temiskaming at the invitation of the Wisdom Keepers at Keepers of the Circle.

The gathering welcomes Indigenous, disabled and allied community members to share in discussion about responsive early childhood and community inclusion. The gathering is guided by three questions:

The gathering will be in a hybrid format with people gathering in person and online. Indigenous peoples generally do not follow a strict timeline in a gathering of this nature. We will do our best to follow the timeline, in order to make it accessible for those online. We do however ask for patience as we listen to the experiences of those who are coming together to share. All presentations will be available to both in-person and online audiences.

Zoom links will be shared with those who are registered in the days before the gathering.

9:00-9:45am Opening, Keepers of the Circle Wisdom Keepers Council

4:00-5:00pm PDF fileNurturing the Young Child from Within An Indigenous Paradigm, keynote by Dr. Sharla Mskokii-Peltier moderated by Kaitlyn Wilcox

2:30-3:10pm PDF fileWhat's LOVE got to do with it? Parenting and Programs Centered on Responsive Care, keynote by Dr. Jessica Ball, moderated by Mia Francis

Regis is a grade 10 student at University Hill high school in Vancouver. Regis loves spending time with his french bulldog Lenny, and his favorite subject is social studies with a passion for learning about his Metis ancestry and the 1800s historical period in North America.

I identify as a Disability & indigenous advocate and a freelance radio contributor across Canadian radio my website is http://www.mikeashkewe.com

My name is Mike Ashkewe but that wasn’t always the case. I was born Michael Dodd and that was my adopted name, you see, I am a 60’s scoop survivor. I was given up for adoption and raised by a non indigenous family and outside of my culture and practices. I was marginally aware of my identity for many years but still suffered racism and bullying as a result of it. I did not know of my Mother’s identity for many years and would not find my biological father til almost 40 year later.

Coming from a particularly horrifying part of Canadian history is certainly a hard thing to have over someone’s head and life but it can change things in unexpected ways. You can learn to draw strength from it and let it make you better than your circumstances. You can share your story of survival and maybe it can help others by giving them strength and hope they never had previously.

However being raised in rural small town Ontario does teach certain things that can’t be learned inside of a classroom. I quickly learned that being quick, clever and were the easiest ways to survive and adapt to a hostile environment. Artistic pursuits such as those offered by drama, creative writing would lead to a life in the creative arts. Adaptivity, creativity often go hand in hand and being able to use this to survive and thrive once I left home was something that I’ll be forever grateful for.

I am currently serving as my region’s Indigenous representative for the Guelph NDP riding association here that opened up new eyes and new drives to learn and more. My indigenous identity is something I am choosing to draw strength and courage from now on and until the end of my days. There is something that I find from the sounds of drumming,the chants of our singers and the rhythm of Pow Wow dancers.

Rona Sterling-Collins, Quist’letko from the Nłeʔkepmx Nation. Rona was raised on her ancestral land, Joeyaska First Nation in the Interior of B.C. and continues to reside there among her family. She is married and has two adult children and a three year old granddaughter. Her son Wyatt has autism, which challenged her to become an advocate for him and other Indigenous children and adults with developmental disabilities.

She has a Master’s Degree in Social Work. In 1996, she started a Consulting Business – Rona Sterling Consulting – and works as an Indigenous Consultant across the Province of B.C. Rona has had the honour of working with organizations and communities and championed many projects that promoted capacity building for Indigenous communities, organizations and
front line staff.

Rona approaches her life from a wholistic perspective and promotes this philosophy to continue to create systems of change. She is dedicated to decolonization practice that hold Indigenous children and families at the heart of her work.

Nurturing the Young Child From Within an Indigenous Paradigm
Sharla Mskokii Kwe, member at Mnjikaning (Rama) First Nation, Ontario, is an Associate Professor in the Faculty of Education, Lakehead University. Her research and teaching experiences in community and post secondary contexts are rich with storytelling, community culture land-based pedagogy and relational ideologies. Mskokii Kwe’s scholarship centers Indigenous teaching-learning practices to counter colonial harm to our family and community systems. She facilitates the honoring of the child's voice and language through oral story and inclusion.

Roxanne Fobister (she/her) Anishinaabe – Ojibway, Mother of three, Early Childhood Educator, Child and Family prevention worker within the band office in her home community of Asubpeeschoseewagong (Grassy Narrows) First Nation, Treaty 3 Territory, in north-western Ontario. Before this role, Roxanne was the Child Care Supervisor at Migizi Wazason Child Care Centre for many years. Roxanne is committed to action and change that supports and uplifts her community members.

Tammy Loon (she/her) Anishinaabe – Ojibway, Mother of 3 and a Kookum to her first grandson Tanner. Tammy is the Supervisor at Migizi Wazason Child Care Centre in her home community of Asubpeeschoseewagon (Grassy Narrows) First Nation, Treaty 3 Territory, in north-western Ontario. Tammy has provided care within the child care sector for 21 years and has been the Child Care Supervisor for the last three years. Tammy is committed to supporting healthy play and growth for the children and families in her community. Tammy is a silent Ojibway speaker; she understands her language but does not speak it.

Monique Lavallee is from Nyeashingaming Unceded First Nation in Ontario.   She is an advocate for Indigenous peoples and their right to self -determination and believes that Indigenous people should have access to culturally relevant and safe services.  Monique is the Executive Director of Niwasa Kendaaswin Teg, a non-profit Indigenous organization in Hamilton. Monique also serves as the President of the Ontario Aboriginal Head Start Association.

Alison has English and Welsh ancestry and moved to Turtle Island from the UK 30 years ago. She lives uninvited on the unceded territory of the Sḵwx̱wú7mesh (Squamish) Nation in BC and works in the School of Child & Youth Care at the University of Victoria on the unceded territory of the lək̓ʷəŋən peoples. Her research aims to explore and inform how the organization and
provision of pediatric and early years programs and services can be equity-oriented – that is how disability services for children can be inclusive of and responsive to families whose lived experiences include marginalization, racialization and discrimination. Alison is committed to community-engaged and critically-informed research and knowledge mobilization.

Let the Rivers Flow will be a hybrid gathering offering both in person and online options for participation. For those who are attending in person, we remind everyone that we are guests in this community.  We ask that you listen respectfully, that we centre Indigenous and disabled people’s experiences. We also ask that no alcohol be consumed at the gathering, and that local community etiquette is followed (if you have questions, please ask). We have also provided a document that is an introduction to the community and people of the District of Timiskaming (https://keepersofthecircle.com/, external link).

How do I register for the gathering?

Is there a registration fee?

No, there is no registration fee for the gathering.

Are proposals still being accepted?

No, at this time we are no longer accepting proposals if you have not already been in conversation with a co-chair of the gathering. The Co-chairs are Niki Ineese-Nash and Kathryn Underwood.

Is the gathering in person or online?

The gathering is hybrid with both in person and online options. If you registered to attend in person, we will reach out to you with information about accommodations in the area. We have booked some accommodations already, so that we can ensure Elders and anyone traveling with children is able to stay on site. Other accommodations are available nearby.

Where is the in person gathering taking place?

What are the conference dates?

What event accessibility will be available?

Please reach out as soon as possible to inclusion@ryerson.ca for any accessibility requirements you have to attend either the online or in person gathering. The gathering will have American Sign Language (ASL) interpreters (Connect Interpreting Services) and automated closed captioning for online content. Childminding will be available for in person attendees and financial support to participate in the gathering is available upon request.

What financial supports are available for attending the gathering in person?

When you register to attend the gathering in person an IECSS staff member will reach out to you to go over the financial supports available and address questions.

What meals will be offered for the duration of the in-person gathering?

Day 1 – Breakfast, Lunch and Dinner will be provided

Day 2 – Breakfast, Lunch and Dinner will be provided

Day 3 – Breakfast, a to-go lunch will be provided

How can I get to the gathering?

You will need to make your own travel arrangements. Elk Lake, Ontario is 600 km from Toronto. 223 km from North Bay, and 225 km from Timmins. If you need additional information, please reach out to us at inclusion@ryerson.ca.

Please note that there has been a shortage of rentals vehicles. If you are attending in person and need to rent a vehicle, we highly encourage you to book as soon as possible.

The gathering is funded by the IECSS Project. The project is funded through a partnership between: the Corporation of the County of Wellington, District of Timiskaming Social Services Administration Board, City of Hamilton, City of Toronto, University of Guelph, Offord Centre for Child Studies and Toronto Metropolitan University, as well as through grants from Social Sciences and Humanities Research Council. 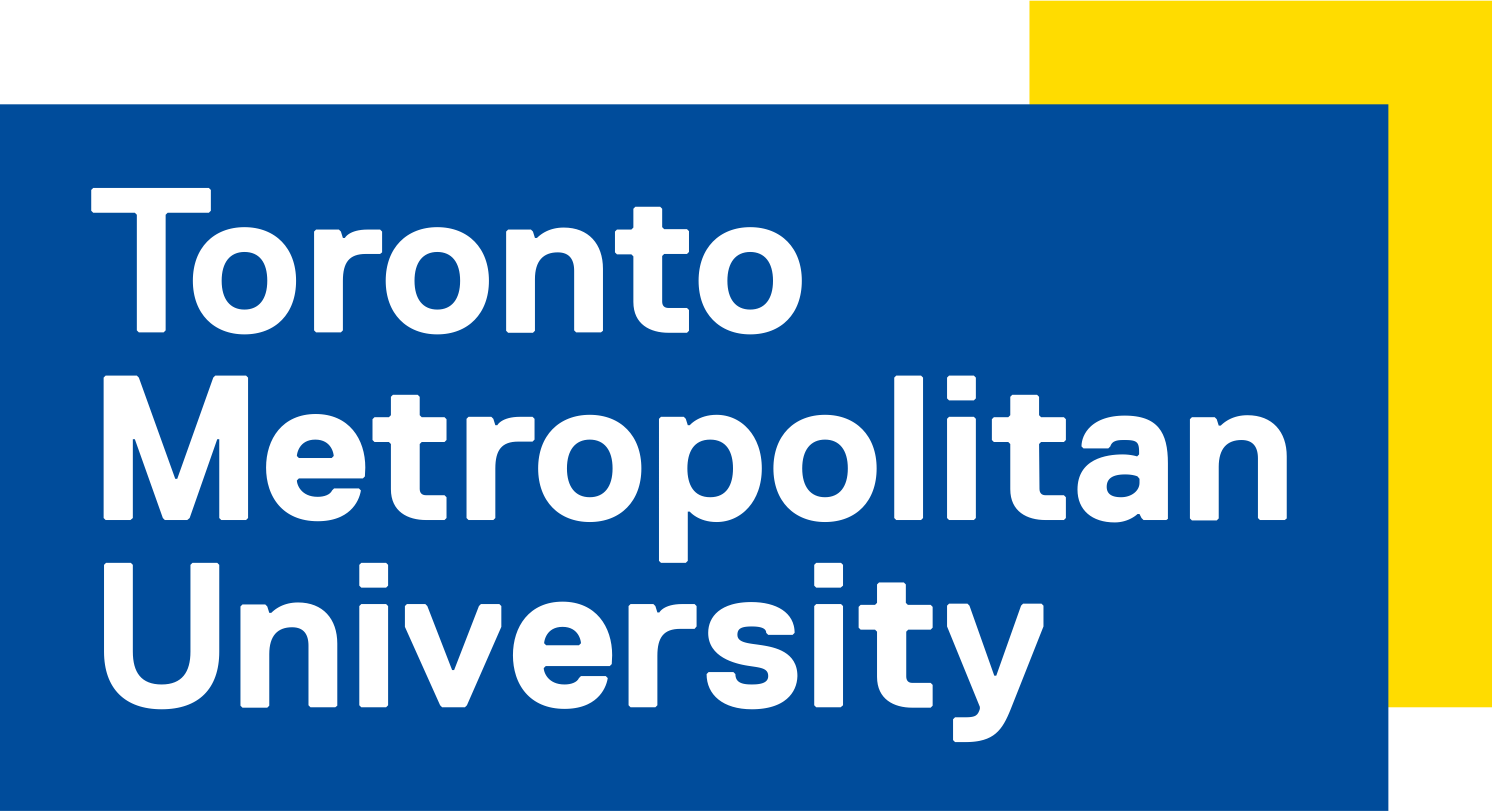 Special thanks to the gathering’s working group