Dr. Tomaz Jardim is a historian of modern Europe who joined the Department of History in 2011. Prior to his arrival at Toronto Metropolitan University, he taught at Concordia University and was a Post-Doctoral Fellow at the United States Holocaust Memorial Museum in Washington, DC. Dr. Jardim has taught courses on the World Wars, modern Germany, the Holocaust, Europe in the 20th century, and surveys of Western civilization. His research areas include the Third Reich, the Holocaust, and in particular, war crimes trials. His first book, The Mauthausen Trial: American Military Justice in Germany , external link(Harvard University Press, 2012), explores the role of U.S. military commission courts in punishing concentration camp perpetrators. Dr. Jardim’s next book, Ilse Koch on Trial: Making the "Bitch of Buchenwald", external link, will appear on Harvard University Press in 2023.

The Mauthausen Trial won the 2013 Wallace K. Ferguson Prize, external link, opens in new window, and Dr. Jardim is the recipient of the 2014 Faculty of Arts SRC Award for outstanding research by pre-tenured faculty. 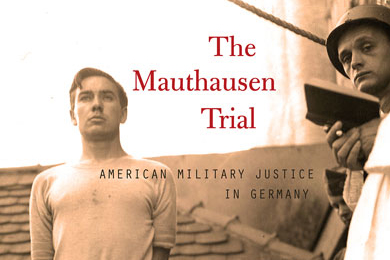 Dr. Tomaz Jardim has been awarded the 2013 Wallace K. Ferguson Prize for his book, The Mauthausen Trial and American Military Justice in Germany , external link(Harvard, 2012).

Dr. Jardim’s research is driven by questions about the nature of justice, perceptions of Nazi criminality, and the ongoing challenges of American military court proceedings. In The Mauthausen Trial, he examines proceedings against 61 personnel from the notorious Nazi concentration camp Mauthausen in 1946. Unlike the better-known Nuremberg trials, which ensured each defendant a full and fair trial, the Mauthausen trial was part of a massive yet largely unknown series of proceedings held in military commission courts akin to those recently established at Guantanamo Bay. Drawing on 15,000 pages of previously unstudied Mauthausen records along with interviews he conducted with surviving trial participants, Dr. Jardim argues that relaxed rules of evidence, questionable interrogation techniques, and the absence of an appeal procedure rendered the trial fundamentally unfair. Paradoxically, however, he also shows that this problematic legal framework allowed for the expedient punishment of unquestionably guilty men who would likely otherwise have walked free.

The Ferguson Prize is awarded annually by the Canadian Historical Association for the best book on a non-Canadian historical topic. In their citation, the judges described The Mauthausen Trial as “a masterful study” that “strikes a deft balance between exposing the intricate details of legal procedure and precedent and representing the very human motivations and reactions of prosecutors, camp survivors, and the accused.”

In 2013, Dr. Jardim was awarded a SSHRC Insight Development Grant for his next book project, IIse Koch on Trial: Making the "Bitch of Buchenwald", external link, an exploration of concentration camp crimes in which gender, criminality, and mass violence were represented and judged in three dramatically different contexts.