Dr. Carl Benn joined Ryerson in 2008 as both a faculty member and Chair of the Department of History. Before then, he worked in the museum field for several decades, where he fulfilled senior curatorial and managerial duties, restored historical properties, curated exhibits and period-room settings, and produced educational and other public services. He oversaw the department’s operations from 2008 to 2013, with the highlight being the introduction of a new degree in History as well as a History Minor. Since completing his five-year term as chair, he has been able to devote more time to teaching and research.

His courses at Ryerson focus on museum history, curatorship, heritage management, material culture, and archaeology. He was the recipient of the Dean’s Teaching Award in 2012 and is a member of the graduate faculty.

Dr. Benn’s extensive publications include six history books. His most recent is A Mohawk Memoir from the War of 1812: John Norton – Teyoninhokarawen (2019). In 2020, it won the Canadian Historical Association’s Clio Prize for the best book on the history of Ontario. Currently he is writing a book on the history of the Royal Ontario Museum. 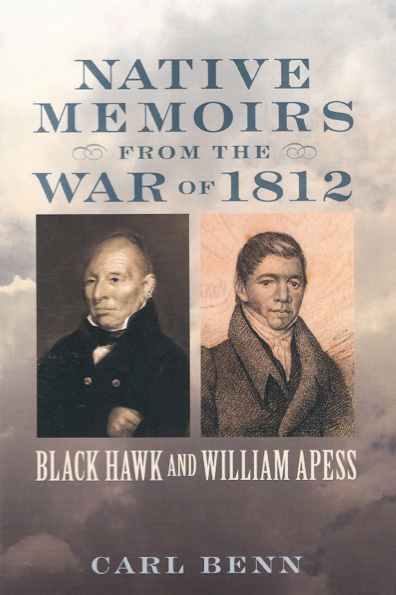 Native peoples played major roles in the War of 1812 as allies of both the United States and Great Britain, but few wrote about their experiences in the conflict. Two, however, famously recorded their stories. One was Black Hawk, the British-allied war chief of the still-independent Sauks from the upper Mississippi River. The other was American soldier William Apess, a reservation-based Pequot from Connecticut. In Native Memoirs from the War of 1812 (Johns Hopkins University Press, 2014), Carl Benn both presents and analyses these autobiographies, offering readers in-depth introductions and annotations to make these fascinating memoirs accessible to scholars, students, and general readers, as well as to advance historical appreciation of these men and the controversies surrounding them. The book also includes specially commissioned maps produced by Ryerson Geography student Michael Morrish.

"One need only consult Benn’s exhaustive endnotes to see the herculean effort that went into researching, annotating, contextualizing, and stitching these two autobiographies together to create a vivid portrait of Native experiences and perspectives of the War of 1812 and the early American republic. ... One could almost argue that Benn's work is actually two books; the autobiographies themselves as one, with Benn’s annotations as the other. All of this is to say that Benn has done a remarkable job of putting these two Native voices into dialogue with one another, and then making them speak to us in the twenty-first century with a vitality that commands our attention."