On February 23rd 2018, the first national roundtable of university and research funding agencies’ equity officers took place at Toronto’s Chelsea Hotel. Hosted by Toronto Metropolitan University’s Office of the Vice-President Equity and Community Inclusion (OVPECI) in collaboration with the Natural Sciences and Engineering Research Council (NSERC), the event provided approximately 70 stakeholders from across the province as well as Quebec, Alberta, British Columbia and Nova Scotia the chance to exchange information on research goals linked to equity, diversity and inclusion. Among the participants were equity and senior research professionals who lead or support university research offices, senior university equity officers and professionals from the CRC Secretariat, NSERC, the Social Sciences and Humanities Research Council (SSHRC), the Canadian Institutes of Health Research (CIHR), the Canadian Foundation for Innovation (CFI), Genome Canada and the Canadian Commission for UNESCO.

"It’s important that equity officers at Canadian universities be included in national conversations about equity, diversity and inclusion in relation to research funding."

Focus of the roundtable event

The roundtable focused on how to manage the transformational aspects of infusing EDI-informed practices, analyses and objectives in research and research systems through strategies that would better align university and federal funding agency programs, while addressing ongoing systemic tensions and collaborating on common goals. With an emphasis on practical ideas and suggestions, the agenda took advantage of the fact that this was the first occasion when representatives from university equity offices and granting agencies were able to meet in a setting in which open dialogue around EDI was welcome. 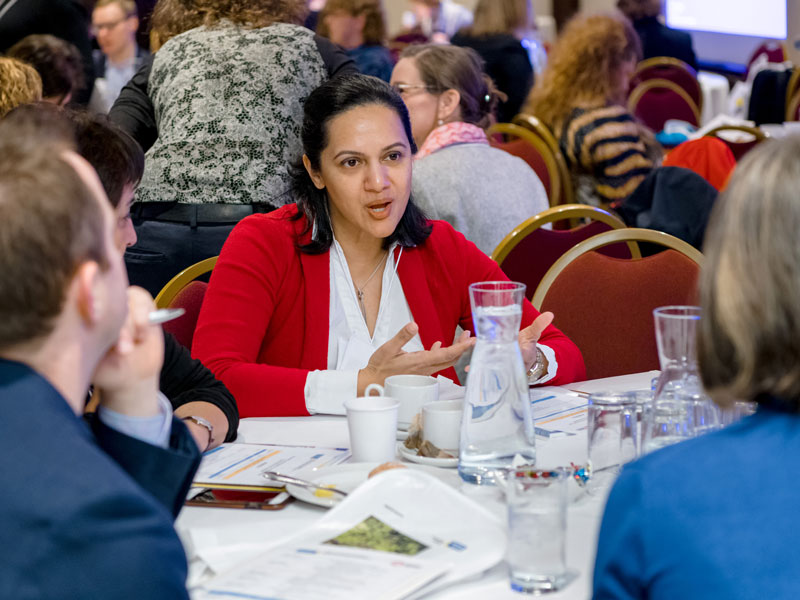 How do we raise awareness of and mitigate bias against the research of scholars from underrepresented groups? And how can we help correct the reasons why they are underrepresented in the academy, especially in sciences and engineering? Often because of established norms in the academy and society, these scholars experience barriers and different career paths from what is considered the norm. They are more likely to have taken different pathways in their career, to have had fewer opportunities to publish in top tier journals, to have contributed extensive service work to the research environment, which tends to be undervalued, and to have their work questioned because of their identity.

Initiatives to infuse EDI in knowledge creation and dissemination and institutional practices have met with a range of barriers. So that the sector moves forward on these initiatives, there is a growing consensus that the active participation of all stakeholders is needed. Indeed, one main impetus of the roundtable was to ensure that equity officers in universities could actively participate in the required dialogue.

Accordingly, the roundtable’s small group discussions and plenary Q&A sessions elicited spirited feedback. The level of commitment exhibited by participants confirmed a collective belief that, together, stakeholders can effectively address the challenges the sector faces. At the same time, participants did not shy away from identifying areas in need of improvement. Promising practices, resources and possible collaborations were discussed.

The event organizers would like to express their gratitude that so many were able to join this noteworthy conversation and look forward to convening a follow-up event in February 2019.

The roundtable included three plenary sessions. In the morning, Denise O’Neil Green, TMU’s Vice-President, Equity and Community Inclusion, spoke on the challenges experienced by university equity officers, including systemic tensions between universities and granting agencies as well as the impact of organizational structures on accountability. She also stressed the importance of training, data collection and goal-setting, as universities and granting agencies support and align with each others’ change initiatives. 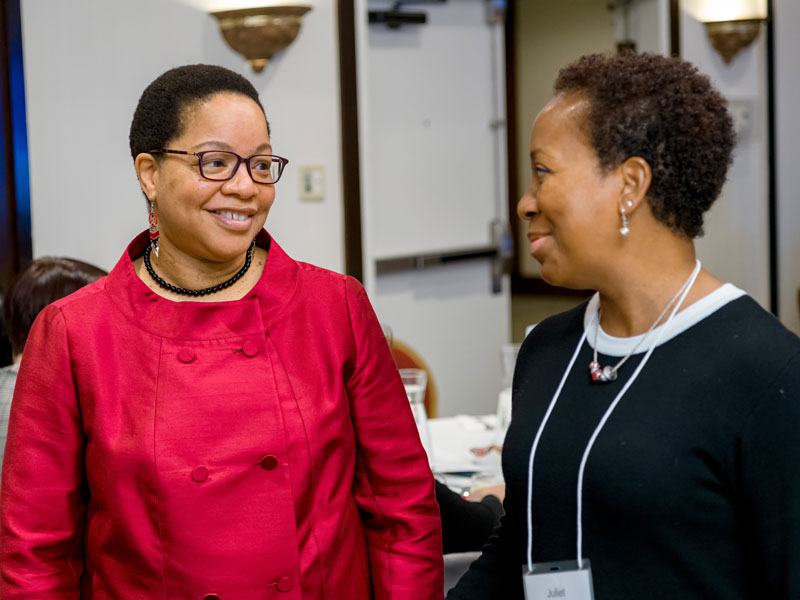 Anne Webb, NSERC’s Senior Policy Advisor on Equity, Diversity and Inclusion, then delved into the EDI dimension of research excellence in an inter-agency presentation of EDI frameworks, plans and actions. Her presentation focused on the persistent barriers embedded in research cultures and systems, as well as the strategies and tools that granting agencies are employing to address these barriers.

In the afternoon, Serge Villemure, NSERC’s Director of Scholarships, Fellowships & Equity and Diversity, presented a report on the November 2017 Gender Summit 11 North America organized by NSERC in Montreal. His report focused on the changes required to enhance EDI in research and innovation. He also outlined the extent to which the current model used to evaluate research needs to be creatively challenged.

In addition, two successive sets of concurrent small group discussions took place on a wide range of topics. To ensure the maximum cross-fertilization of ideas and perspectives, these small discussion groups were structured so that each table included a facilitator, at least one participant from both research agencies and universities, and a note-taker. Groups then had a chance to share the points raised in their deliberations in a broader plenary discussion.

To a large extent, the points touched on in the small groups tended to elaborate on and amplify the points made by the plenary speakers. A variety of opinions were voiced throughout the day. However, the overwhelming sense was of a general consensus on the major issues covered. Participants also agreed that the discussions should be summarized and distributed so that the 2019 roundtable will be able to jump off from the conversation launched at this inaugural gathering.

This report was created in collaboration with the Natural Sciences and Engineering Research Council of Canada (NSERC), external link 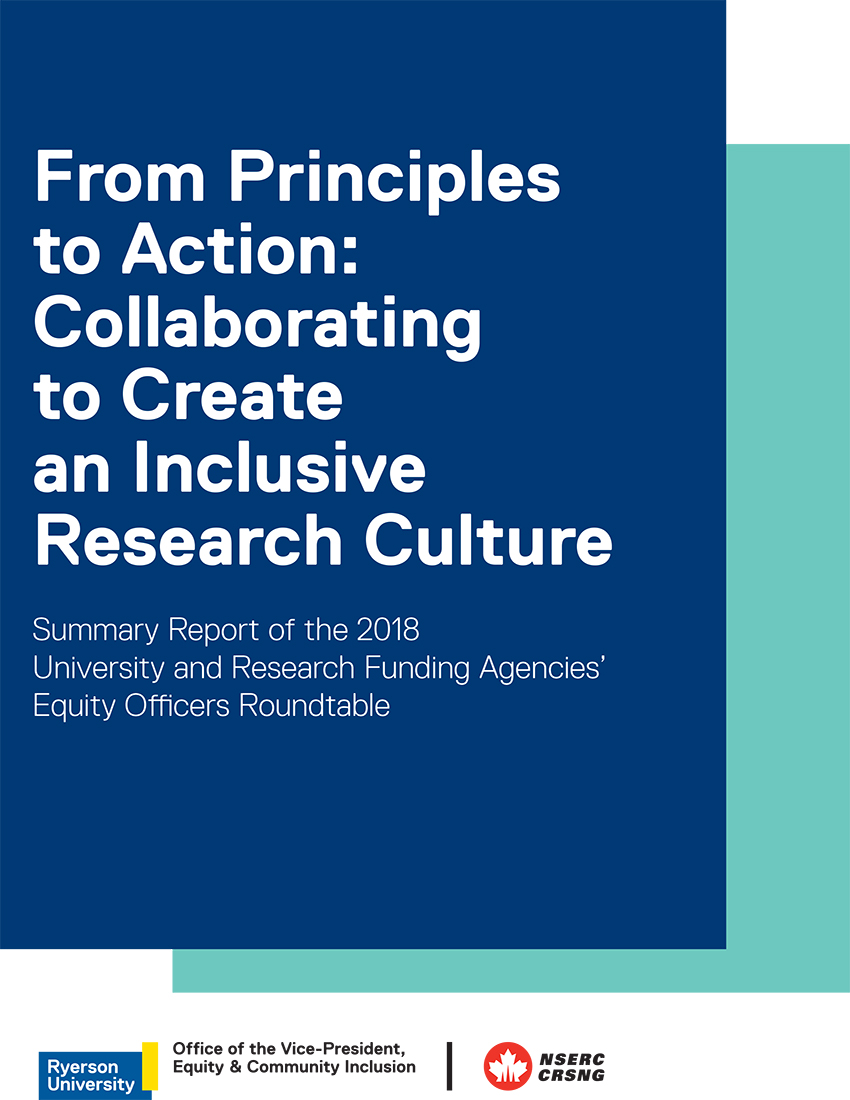 You can also download the PDF fileFrom Principles to Action: Collaborating to Create an Inclusive Research Culture report