Brampton: The Land of Secondary Suites

By: Diana Petramala and Ryan Kyle

In this blog, we use the data to look at how the existing housing stock changed in municipalities across the Toronto CMA through new additions, deconversions and demolitions between 2019 and 2021.

Figure 1 includes housing starts data for units created and units lost through renovations and demolitions in the existing housing stock from 2019 to 2021.1 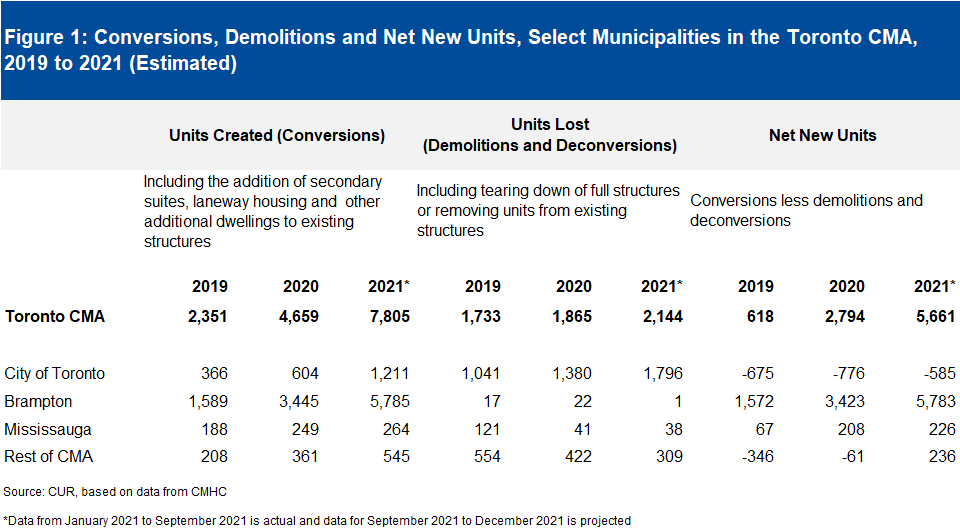 Units created in Figure 1 are calculated as all new units added to an existing structure, such as the creation of a legal secondary suite (a basement apartment), a laneway home, and/or additional apartments added to triplexes or multiplex housing.

Units lost include the complete demolition of residential housing and the removal of a unit from an existing structure (deconversion), including the tearing down of a house, whether it be a single-family home or a multi-family dwelling or the loss in units from the conversion of a three-apartment home into a single-family home.

Net new units is the difference between the additions and the demolitions.

An example of a deconversion would be a couple who purchased a home with three apartments in the city of Toronto and who have then renovated it into a single-family home. The net change in the housing stock from this project would be net loss of two units!

Three interesting facts from the data

When digging through the data we found contrasting trends in the city of Toronto and Brampton to be interesting. There were very little conversions/deconversions in the rest of the CMA:

The data findings are interesting indeed, but they don’t necessarily tell the whole story.

In addition, some municipalities, such as the city of Toronto, do not require a permit to remove apartments from a structure. In the example above, the couple would not need a demolition permit to remove the three apartments. They would only need a building permit to reconstruct the single-family home. Therefore, it is unclear how such projects would be counted in the CMHC data, and the net losses could potentially be greater.

Despite the data limitations, the trends of skyrocketing construction of secondary suites in Brampton, already home to the second-largest stock in Ontario, appears to be real (Figure 2).2 Speaking with the building department at the City of Brampton we found their data tell the same story! The City of Brampton has made some changes in recent years to policies governing secondary suites to make the creation of legal units easier, so this trend is not that surprising. 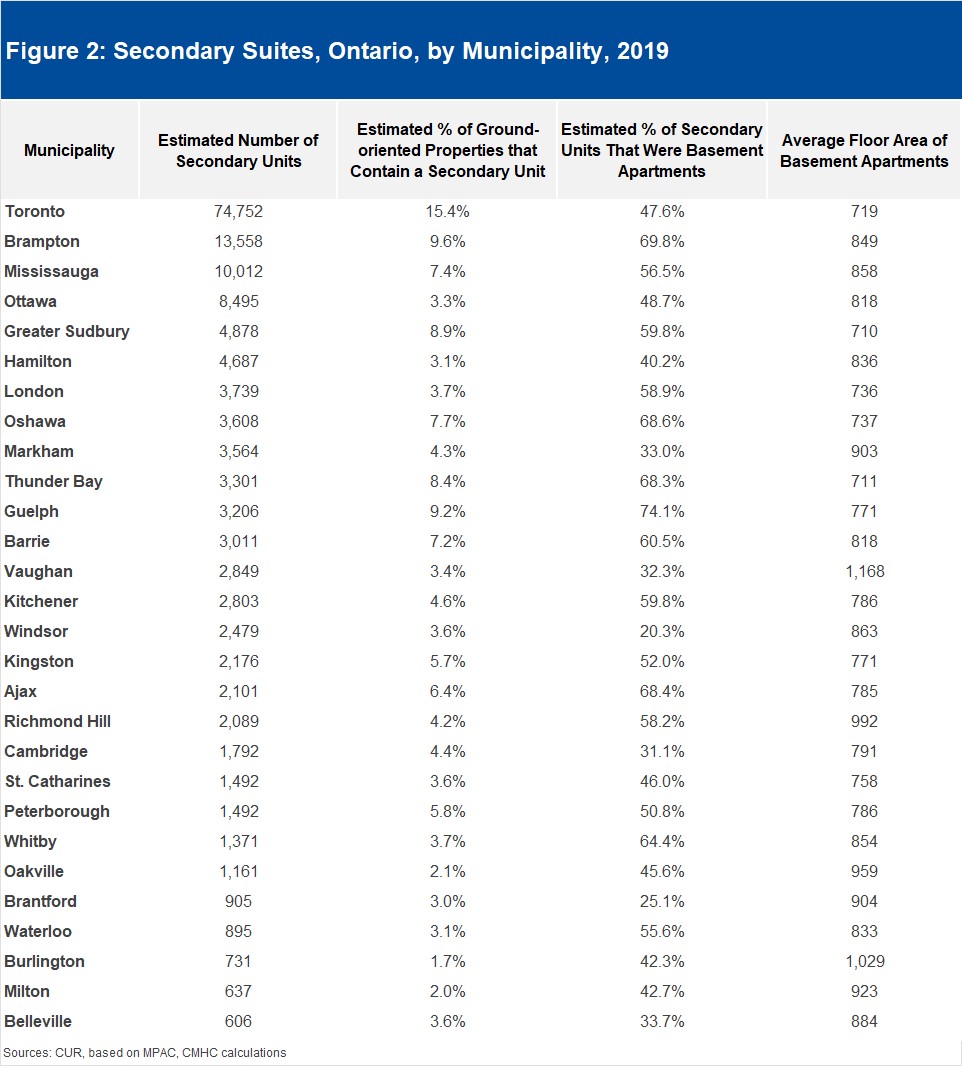 Brampton is a good example of how much housing could be rapidly added to the Toronto CMA through the loosening of building restrictions in neighborhoods zoned residential through gentle densification or “missing middle” housing.

Meanwhile, the city of Toronto is a good example of how residential zoning protections are leading to a net decline in its existing housing stock, although some of that is also being replaced with brand new developments.

[1] At the time of writing this blog, data was only available up to August 2021. Therefore, we estimated a final tally for the year.

Ryan Kyle is a Research Assistant at Ryerson University’s Centre for Urban Research and Land Development (CUR) in Toronto.