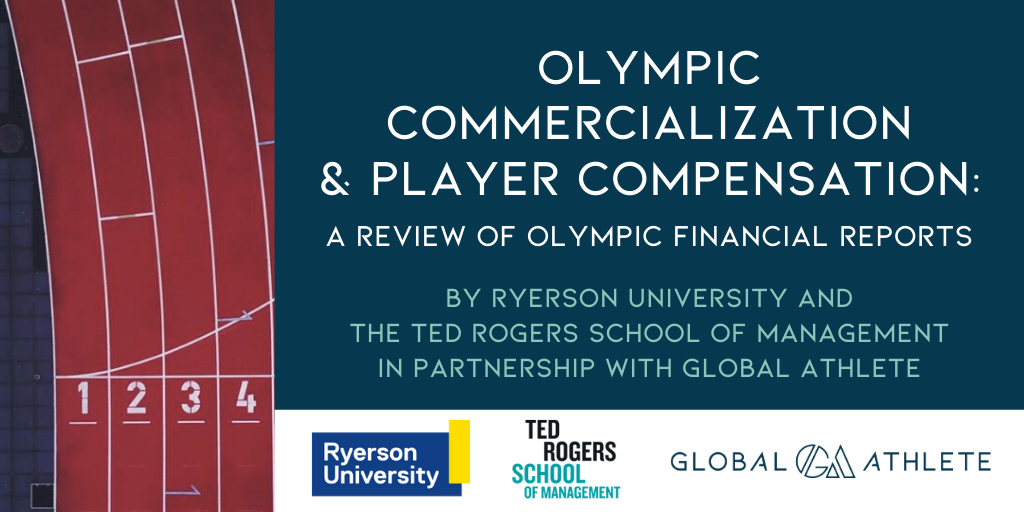 Global Athlete in partnership with Ryerson University and the Ted Rogers School of Management, announces the results of a study on Olympic commercialization and player compensation. The object of the study is to find solutions to improve the lives of Olympic athletes and the well-being of the Olympic movement. A thorough review of the International Olympic Committee (IOC) financial reports from 2013- 2016 resulted in the following key conclusions:

1. Collective bargaining/leverage: Athletes should be appropriately compensated for preparing and attending the Olympic Games. Currently the majority of athletes and their families financially subsidize years of training, travel and equipment to compete for a multi-billion dollar industry of the Olympic Games.

3. Prioritization of funding: Instead of the IOC spending its privately earned revenues compensating athletes, the majority of these funds go towards financing the many internal and external organizations affiliated with the IOC including funding of: International Federations, Continental Olympic Committees, National Olympic Committees, Olympic Channel, Museum and Olympic Studies.

4. Olympic Charter Rule 40: The IOC relaxation of Rule 40 which prohibits athletes from profiting from their association with the Olympic Games does not go far enough. To date less than 10 of the 206 National Olympic Committees have relaxed Rule 40 for their athletes. Rule 40 should be abolished in place of collective bargaining.

5. Professional Sport compared to Olympic Sport: Despite the IOC’s claim of a non-profit status, the IOC reliance on broadcast rights and revenues makes the Olympic movement much more closely resemble a professional sports league. Yet the 5 largest professional sport leagues in the world pay between 40-60% of their revenues directly to players. The IOC has spent a mere 4.1% on athletes.

Global Athlete is committed to working with athletes and athlete groups to develop a more collective approach to how sport is being run. Our interest is to help sport flourish for all parties involved.

Amidst the current economic hit sport is taking with the Covid-19 virus, athletes can play a crucial role in shaping the future direction of sport.