360 Tour of the First Floor

360 Tour of the Second Floor

From studios to study spaces, the School of Journalism has a spot for you. Check out the facilities that are reserved for journalism students below. 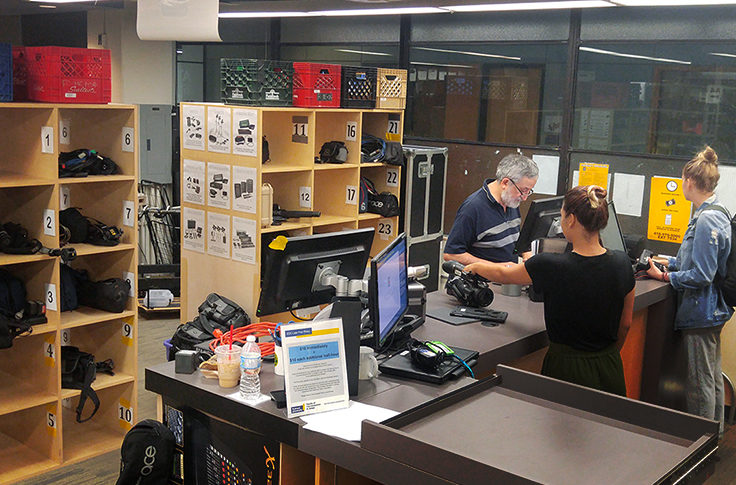 Equipment available through the EDC is used for learning, projects and research in all schools across the Creative School. Students in the School of Journalism are able to sign out cameras, audio recorders, video equipment, as well as laptops and mobile technology. 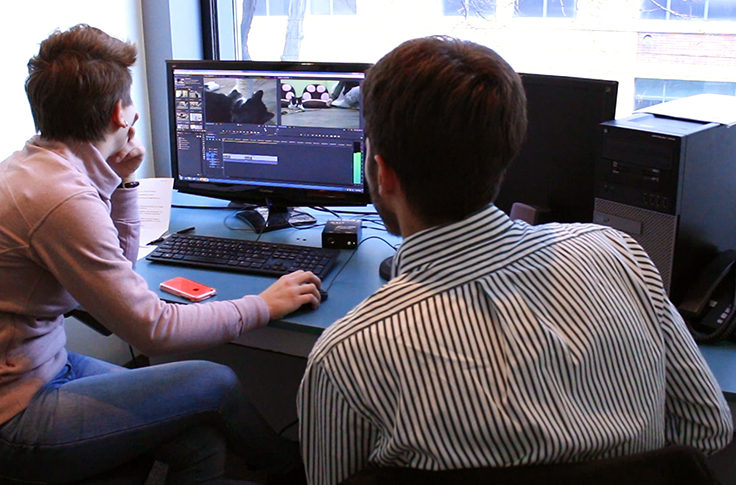 There are ten video editing suites on the second floor of the Rogers Communication Centre primarily dedicated to video post production. The suites are equipped with dual-display edit stations with the full Adobe Creative Cloud software package, Avid's iNews production software, phones, and audio equipment for voiceover recording. The suites are networked to one another and the television studio so students can collaborate on projects and send finished news items directly to the studio for playback using Bit Central's Precis system. 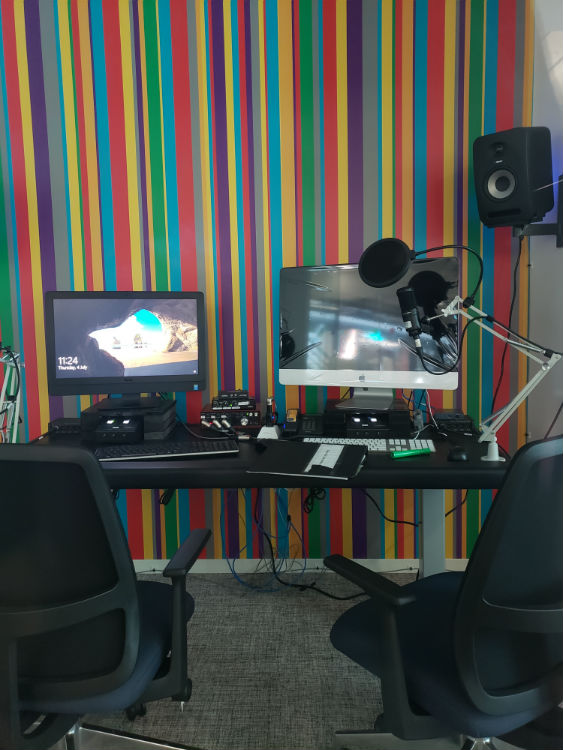 There are five new post-production audio editing suites located on the second floor, next to the Catalyst Learning Space. The suites are equipped with microphones, speakers and the Adobe Creative Cloud software package. 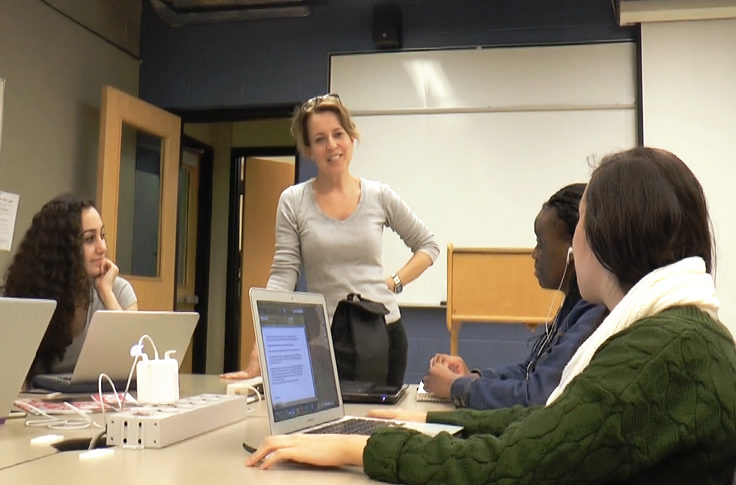 The school has several mobile computing labs, where students are encouraged to use their own laptops for class assignments. Laptops with all of the production software are also available to be booked out from the EDC. 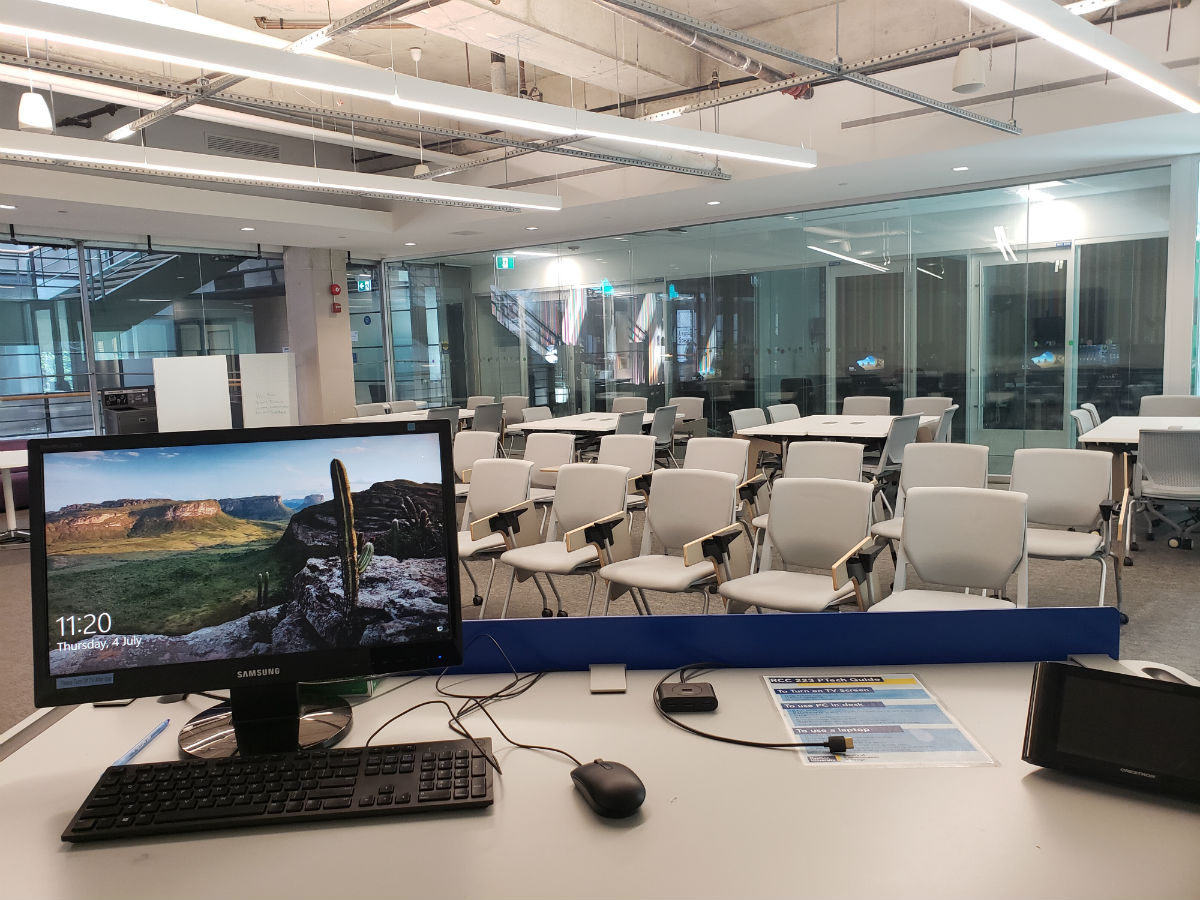 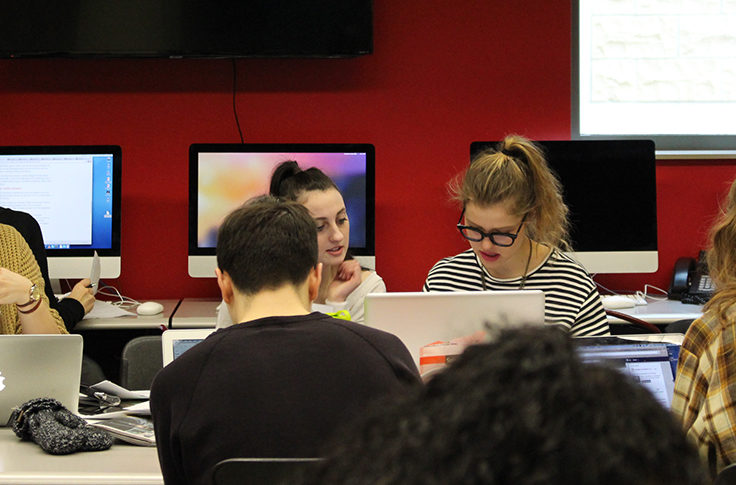 In the Review newsroom, students collaborate on their stories, post content to reviewofjournalism.ca, external link, and have planning meetings for the publication.

On The Record's morning update in the Venn 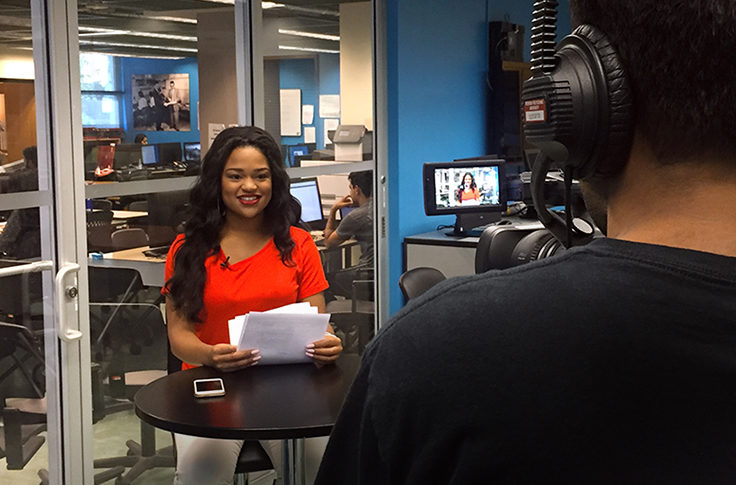 The Venn includes a live video production space for On the Record. With the newsroom as its backdrop, senior students produce morning updates which can streak live. 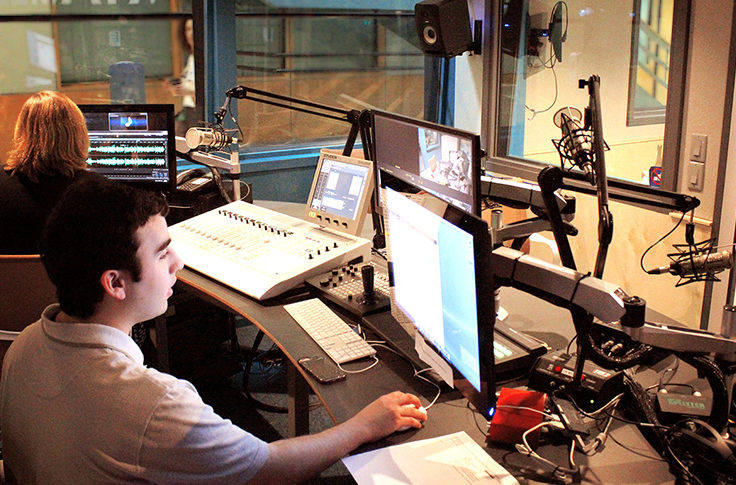 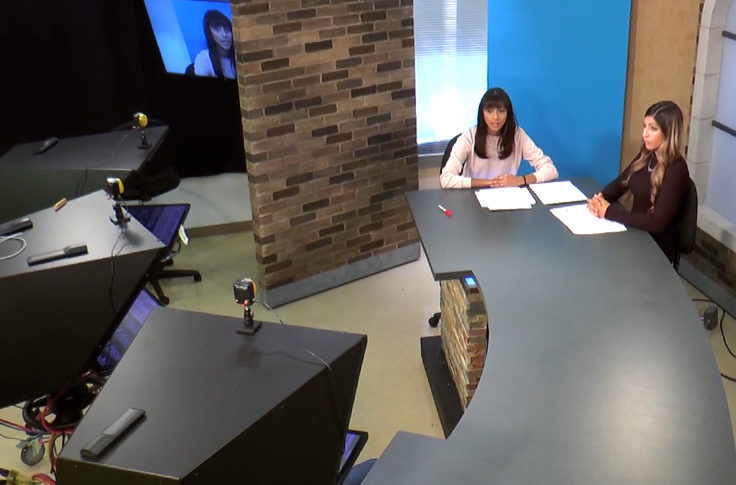 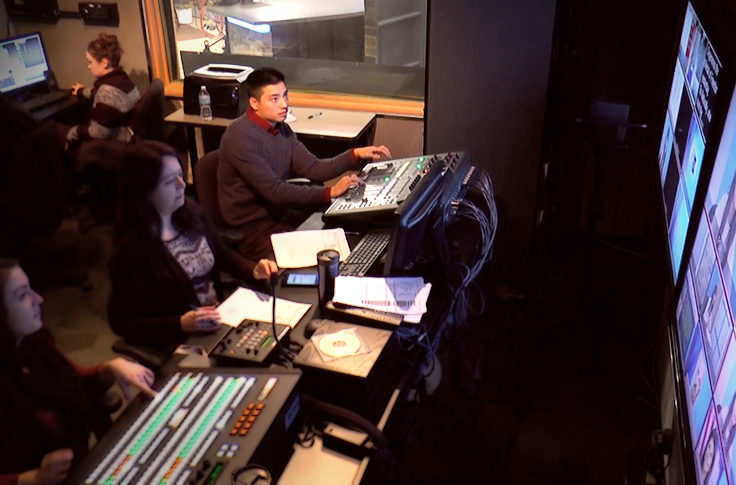 From the state-of-the-art control room, students produce live newscasts, incorporating robotic cameras, live feeds, graphics, and digital video playback. These newscasts can be viewed on the in-house digital signage and through live-streaming to websites and Facebook. The control room has a teleprompter, graphics computer, audio board, playback computer, switcher and everything that is needed to run a broadcast.

On the Record Newsroom 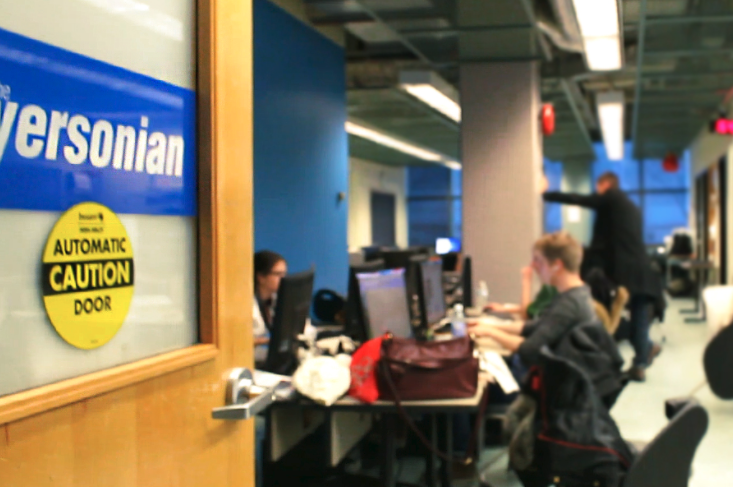 On the Record, external link is a digital-first newsroom run by final-year journalism students at the school. Students dedicate six weeks to working in the newsroom. They attend story meetings, work on daily news and long-form projects, and act as editors for the various beats and platforms. Print, broadcast and online content are distributed through a bi-weekly campus newspaper, daily newscasts, and a constant online presence. 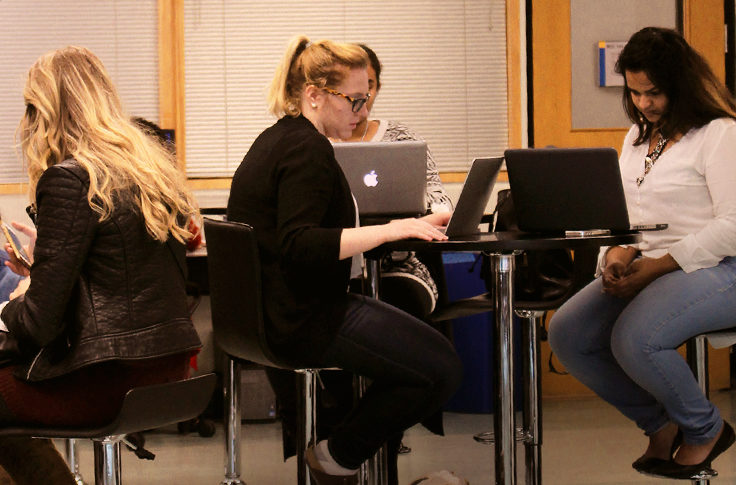 Most days in the Venn, you will find students hard at work completing assignments ranging from print articles to multimedia online projects. The space includes printing, computers with production software and meeting space. The Venn is also a flexible space for hosting various events, including lectures, workshops, panel discussions, and social events.

The Toronto Star centre for reporting 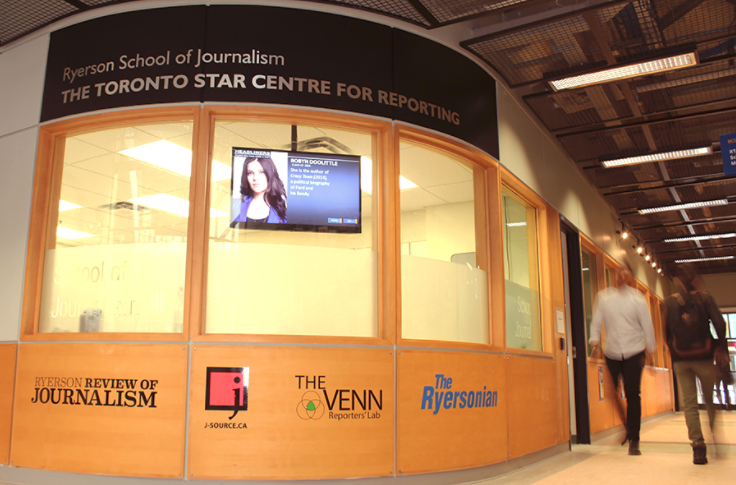 Located on the first floor of the RCC, this space includes the newsrooms for the Review of Journalism magazine and On the Record. Between the newsrooms is the Venn Reporter's Lab, a flexible space for learning, news production and events. The centre also houses the Ideas Lab, which is used for discussion and workshop-style classes.