What did you originally see yourself doing when you first enrolled in journalism school?

I was pretty laser-focused when I started and wanted to work as an editor for a magazine. I had written for a few publications and had started a newspaper while in high school, and I was so thrilled that you could do this thing where you got paid to dig into issues and write about them.

How did that vision change as the years went by?

Even though I had always told myself (and others) that I wanted to work at a magazine, I found myself pursuing placements with broadcasters during the first few years of the program.

Broadcasting was completely outside of my comfort zone and it was challenging, but we were always encouraged to flex our skills so I went for it. I had never considered working in communications as it felt a bit like selling out at the time, but the ability to consistently try new things while still retaining my love of storytelling ultimately led me to pursue jobs in that field.

Thinking back to your first-year self, how do you think they would react to where you are now?

I often think back to this version of myself, who was quiet, shy and lacked confidence. I can remember feeling like I was going to faint from stress over finding sources for streeter interviews and the grammar test we had to take in the first week of first year. I didn’t think I would make it through the semester, let alone the program.

I think first-year me would be pretty proud (and maybe a little surprised) that I not only survived the program but eventually found my groove and thrived in it. It’s important to check in with yourself to see how far you’ve come.

What do you think the School of Journalism experience offers that you can’t get anywhere else?

The ability to learn from high-calibre industry professionals who bring their experience and knowledge to the classroom, and the diverse stories and opportunities that can only come from being located in downtown Toronto. You can’t get this combo anywhere else.

What have you done since graduating/how did you arrive at your current position?

I started my career as a recruitment and communications officer for [the university], speaking to students across Canada and internationally while writing and editing our website and publications. This evolved into portfolios that balanced public speaking, web editing, print production and social media management. I took on freelance clients on the side until I landed a management position, and shifted my focus more to project management and developing an in-house creative unit. I now lead a team of designers, writers, editors and developers, and I’ve been in this role for just over a year. It is the most consistently challenging thing I’ve ever done.

How has your journalism degree and what you learned in school prepared you for your current career?

No two days are ever the same when you’re studying journalism, and this ability to be nimble has served me well in my career. Sometimes things fall on my plate that I don’t have the aptitude for, but I’ve always just rolled with it and sought out others who can help me learn – very much the same process as finding the best source for a story. My job involves asking a lot of questions, compiling large amounts of information, and assessing how best to distill it down via different formats for specific audiences which I practiced daily at [School of Journalism].

My CP Style Guide is still my most prized possession.

Can you talk about one of the biggest:

Finding a meaningful career that challenges me, allows me to develop and utilize my skills and enables me to help others.

While I don’t work as a journalist, something I’m often faced with in communications is the need to completely reinvent the way we engage with our target audiences. There’s no comfort zone in this field, because as soon as you’ve completed a campaign your demographic preferences have shifted or new technology is available (or both). My training and ability to be agile is something I draw upon daily, along with endless patience when working with multiple stakeholders.

What’s one of your favourite memories from j-school?

I was really struggling with a story I was producing for a radio documentary class. I was covering a children’s music and performance group, and the audio I had captured was a bit of a hot mess and I wasn’t sure how to structure the piece. My professor, Stuart McLean, listened to what I had captured and told me to “embrace the chaos.” This spoke to me on many levels as someone who struggled (and still struggles) with perfectionism in particular. Learning that sometimes things will be messy but they’ll still work out was a really good lesson that I still often remind myself.

I also loved the final show we produced for our fourth-year masthead class. We scheduled a very serious, no-nonsense line-up and snuck in a musical number (why not) for the end of the broadcast. After spending four years with many of the same people day in and day out, it was a lot of fun to do something completely off the wall and unexpected.

Any memorable School of Journalism professors during your time at the university?

Mark Bulgutch, Jagg Carr-Locke and Stuart McLean were three professors who consistently challenged and encouraged me, and I’m grateful for all that I learned from them. Shout-out to Gary Gould as well for his endless patience and enthusiasm.

What advice would you give to current journalism students?

Be open to opportunities. I approach my career the same way I had approached my time as a student – to say yes as much as possible, no matter the potential challenges. You never know who may have an opportunity or where something may pique your interest, so cast a really wide net when networking and don’t be afraid to try a different path even if it’s outside of traditional journalism. Also, learn to take critical feedback as a gift and a chance to improve – professors are there to equip you with the skills needed to be a professional in a demanding field.

And go easy on the coffee.

Grads at Work is an occasional series of profiles of alums. If you know of a notable grad you’d like to see featured, send us an email at office.journalism@ryerson.ca. 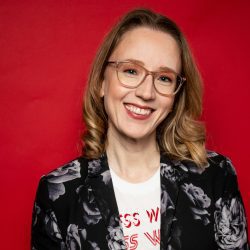