Pacinthe Mattar, School of Journalism 2010, is the Senior Producer at Antica Productions. This interview was done when she was the (acting) senior producer at CBC’s The Current in Toronto.

How did you get your big break at the CBC?

It was January 25th which was the day of the Egyptian revolution in 2011. I had agreed to fill in on a 4 a.m. shift because someone was sick. So I’m sitting in this meeting where they’re deciding what stories to cover that day. People are sitting around a table and none of them know who I am, so I’m sitting just sitting there like, oh my God, I hope I don’t do anything stupid. They decide what to cover for the day but no one mentions Egypt. I’m Egyptian, right, so I knew there were going to be big protests that day. Everyone was getting up and I was like, ‘I have an idea, these protests are going to happen in Egypt today. I think we should cover it. It’s going to be a big deal.’ They said, well if you find someone that’s worth talking to like let us know. I left the meeting and found this journalist and we ended up doing an interview on News Network. He was such a great interview; he did a good job of communicating how big of a deal [the revolution] was. After that aired someone came up to me and said, ‘As it Happens is looking for someone to fill in for them, would you be interested?’ and I said sure! So I stayed at As it Happens for about six months and then I went to the Current for what was supposed to be three weeks. Then a staff job came up and I applied for it and got it. But I couldn’t plan for any of that. It was just a combination of luck and hard work. What if that woman hadn’t been sick that day at 4:00 a.m.?

It sounds like you took control of your career by saying yes to the opportunities that came your way.

Yes for sure, saying yes and daring to speak out. I was like, I know this is a big deal and I’m going to risk speaking out in front of all of these people and maybe sounding like an idiot.

What advice would you give to young journalists who might be trying to make that transition from part-time work or internships, into a full-time gig?

I would say keep showing up, say yes. Also, follow your interests. Everybody has something about them that makes them different whether it’s life experience, or upbringing, or worldview, or interests. Bring that to work. If I didn’t know anything about Egypt I wouldn’t have said anything in that room and it would have been like any other day. Listen to your gut.

You must be constantly challenging yourself by saying yes to new opportunities. Do you like the challenge that comes with it?

Yeah, it does give me some short-term anxiety though. So in the short-term, I’m like, why did I say yes to this? And then I start getting these anxiety dreams where it’s 2:32 a.m. and I wake up thinking, oh my God I didn’t think about a detail in the story.

How do you deal with those feelings of imposter syndrome and short-term anxiety so that they aren’t overwhelming or paralyzing?

I think accepting and acknowledge it is important. Some of my colleagues who I really look up to have mentioned in passing that before they went and did [an important project] they were not sleeping and I was like, wait even you? Then you realize that it’s not only you and that it’s part of the process. Now, I remember how many times I’ve been through the wave of being really anxious about something and then doing the work and it ends up going well, and I realize that what caused the anxiety isn’t actually doing the work, it’s the lead-up. So I remember the pattern and I remind myself that I’ve been here before. Now when I hear the little imposter voice in my head, I let the anxiety talk, I don’t shut it down, and then I continue.

Thanks for being honest and sharing your experience. Is there anything you would like to add?

Yeah, everybody goes through it and I think there’s power in admitting it. Just remember that you learn by doing. I remember coming back from my documentary in Baltimore and I forgot something so simple, I forgot to get ambient noise for the background. But I learned from that and now I won’t forget it again. You learn by messing up and missing things. But in the end it always [comes together] and it’s always exhilarating and exciting.

Grads at Work is an occasional series of profiles of alums. If you know of a notable grad you’d like to see featured, send us an email at office.journalism@torontomu.ca. 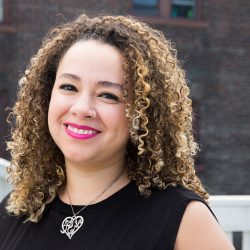