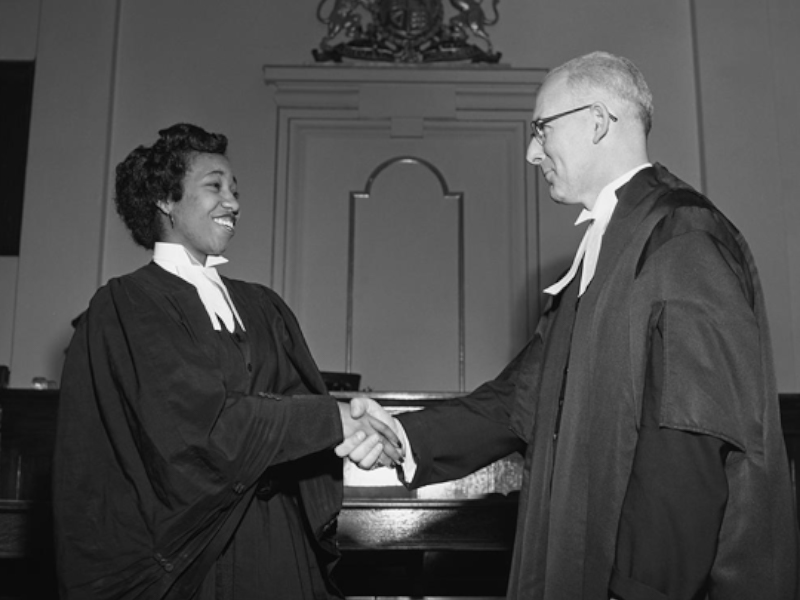 Bio / Key facts: DOB - DOD, Place of Birth, Occupation: Violet Pauline King was born in Calgary, Alberta on 18 October 1929. A descendant of African-American settlers, she was the first Black person to graduate – in 1953 - from law school in Alberta. A year later, in 1954, she became the first Black person to be called to the Alberta Bar and Canada’s first Black female lawyer. On 30 March 1982 King died of cancer in New York at the age of 52.

Early years/ Motivations: King’s parents had immigrated to Calgary from the U.S.A. in 1919 during a period where the Canadian government actively tried to ban Black American immigration. Thus the Calgary (and Alberta more generally) King knew was overwhelmingly white.

Ambitious and community minded from a young age, King was president of the Girls’ Association in her senior year at Crescent Heights High School. It was also in high school that King developed a passion for the law, writing in her grade 12 year book that she wanted to become a criminal lawyer.

King taught piano in Edmonton to pay for her post-secondary education. She enrolled in the University of Alberta in 1948, the University’s only Black female student at the time. During her undergraduate years she assumed various community and leadership roles. An early second-wave feminist, she was a member of the Blue Stocking club which was composed of women at the University who came together to discuss history and public affairs. She was also Vice-President of the students’ union; a representative at the National Federation of Canadian University Students; a representative to the International Student Conference (1952 in Hamilton, Ontario); and was elected class historian from 1951-1952. For her many contributions to the University of Alberta, King received the Executive “A” gold ring in 1952, one of four students to be honored. She graduated with a BA in that same year.

King was also actively involved in supporting and promoting the rights of Black workers. She was the treasurer of the Calgary Brotherhood Council, a labor union for sleeping car porters. King had firsthand knowledge of the racial barriers to employment faced by Black men as her father worked as a sleeping car porter for Canadian Pacific Railway. In 1954 the American based International Brotherhood of Sleeping Car Porters and Maids recognized her contributions to the movement.

Key accomplishments/contributions: King realized her dream of becoming a lawyer and is the first Black person to both graduate with an LLB (1953) from the University of Alberta and be called (1954) to the bar in that province. She is also Canada’s first Black female lawyer.

She practiced criminal law for several years in Calgary before moving to Ottawa to work in the federal department of Citizenship and Immigration. In her various roles in the department, she travelled throughout the country meeting leaders from different service and community organizations. Throughout her career she gave speeches discussing racism and her hopes for gender and race equity.

Later years/ Present day: In 1963, she moved to New Jersey to become the Executive Director of a YMCA Community Branch, a position that entailed assisting African-Americans in their search for gainful employment. This marked the first time a woman held an executive position in the YMCA in the U.S.A

Other / Interesting facts:  Not only was King the first Black law school graduate in Alberta but she was also the sole woman in her graduating class. King was one of three women in a student body of 142 in the Faculty of Law.  However, she was the only woman to graduate from the program in 1953.

It would take nearly another decade for Alberta to have its second Black lawyer – Lionel James, who was admitted to the bar in 1963.