Meet the Giles sisters, representing the Rams in a family basketball dynasty

Sisters Kyia and Keneca Giles both played for championships at TMU
By: Jess Leach 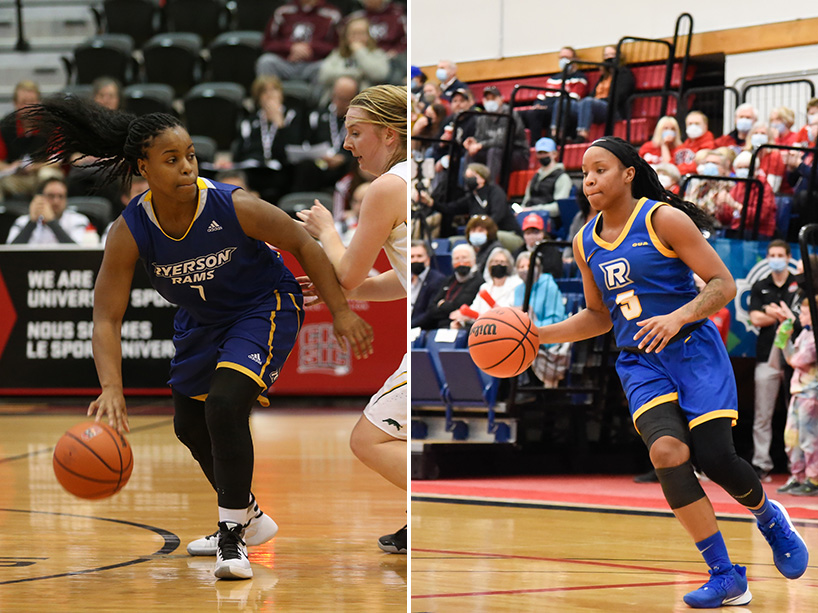 Keneca Giles (left) and Kyia Giles reflect on their playing careers at TMU. Kyia was part of the Rams 2022 undefeated championship team and before her, Keneca won an OUA championship and national silver medal in 2016.

You may recognize the names Kyia and Keneca Giles as they are certainly household names around the Mattamy Athletic Centre.

The sisters, from Winnipeg, both chose to play for the Toronto Metropolitan University (TMU) women’s basketball team. Both women were part of the university’s most successful teams, with Keneca’s team winning the OUA championship and national silver medal in 2016 and Kyia being part of the undefeated 2022 U SPORTS national championship team.

TorontoMet Today caught up with Keneca and Kyia to talk about their time at the university and the family basketball dynasty they are part of. 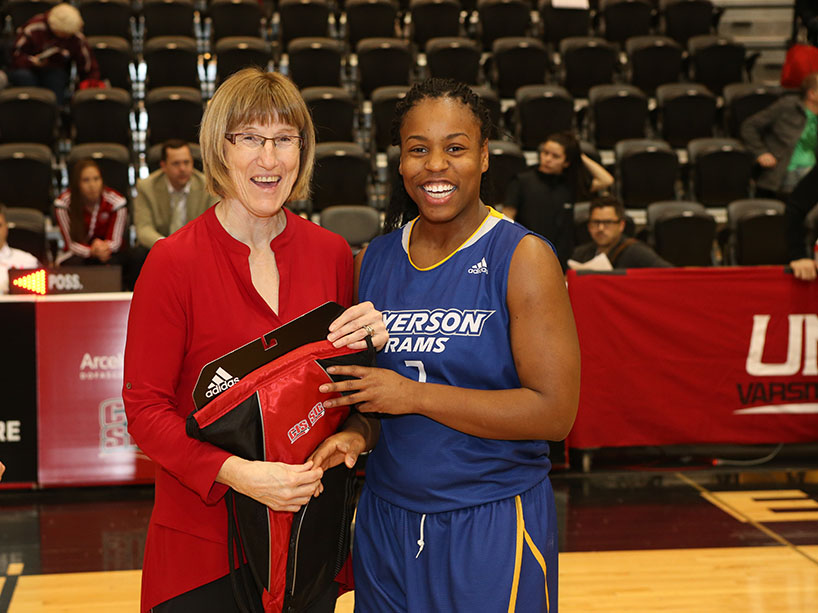 Keneca Giles received player of the year honours while playing with the Rams in 2016.

Keneca came to TMU first after she leafed through a university brochure her brother had. She was invited by both TMU and York University to showcase her basketball skills on a trip to Ontario back in 2011.

“The vibe felt right for me,” Keneca said.

Keneca played five seasons with the Rams and made appearances at nationals in both her fourth and fifth seasons. She had a stellar final season, winning the OUA championship, a silver medal at the national championship and was named Canadian Interuniversity Sport (CIS) player of the year in women’s basketball.

For Keneca, her time at the university went beyond her success on the court.

“One of the greatest things about playing was the camaraderie,” she said. “We had good relationships between all the teams, you could really feel a buzz on campus and at the Mattamy Athletic Centre. Those are experiences I’ll never forget.”

Keneca graduated with a master’s in public policy and administration. After attending law school, she is now articling and hopes to practice law in Ontario soon. 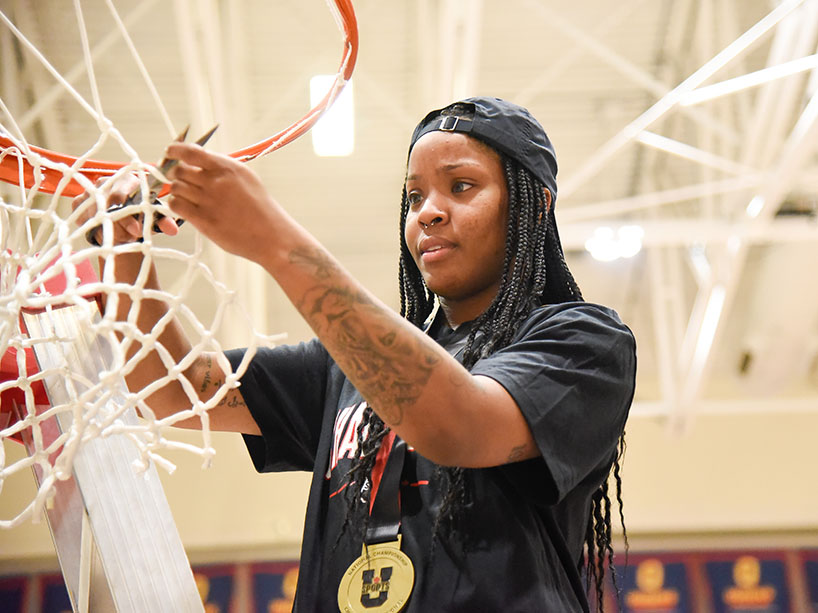 Kyia Giles celebrates by cutting a piece of net from the basketball hoop after winning the national championship on April 3, 2022.

Kyia followed in her older sister’s footsteps and joined the Rams in 2019 after playing basketball for three years with the University of Regina. It was Keneca’s time as a Ram that made Kyia feel she had a connection to the program. Plus for Kyia, who was finishing up a degree in politics and governance, Toronto felt like the right place to explore a post-basketball career.

Kyia joined the team right before the COVID-19 pandemic shut down the playing season. And even though she was unable to play, she says she felt the same sense of camaraderie amongst the community that Keneca felt while she played for the Rams.

“Being able to build such good relationships with all my teammates, other athletes and the whole athletic department has been really great,” she said.

For Kyia, the wait and the hard work paid off in her final season with the Rams. After being sidelined for over a year, the Rams women’s basketball team went undefeated during the 2022 season. The storybook team won the OUA title and gold at the national championships this past March in Kingston, Ont.

Kyia says that winning the national championship and going undefeated gave her the chance to see her hard work pay off.

“As a student athlete you put so many hours into your sport and perfecting your craft,” she said. “We worked so hard, we practice so hard. It just shows that with all the work you put in, you get the outcome.” 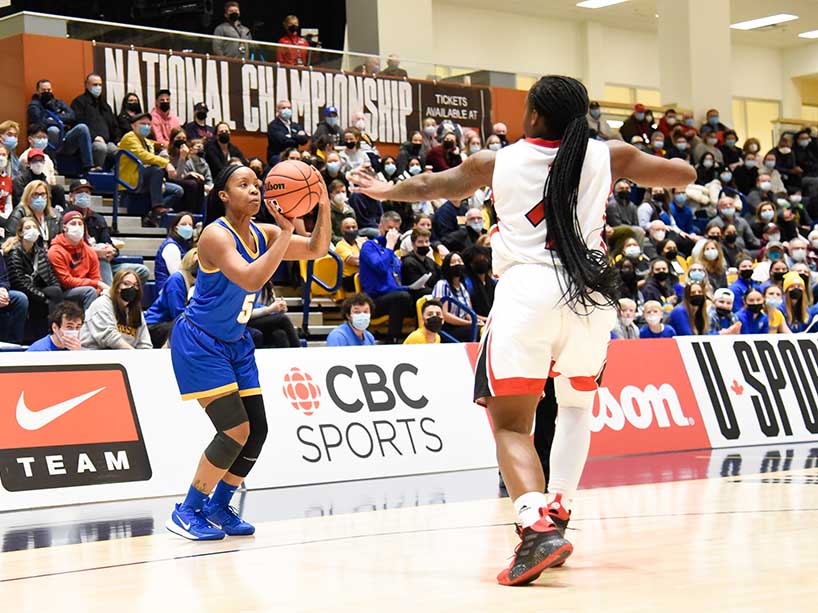 In a rare twist, Kyia Giles played against her twin sister Kyanna for the national championship title.

Before the 2022 national championship, few people may have known that the Giles family has a third sister who plays varsity basketball - Kyia’s twin sister Kyanna, who was on the opposing University of Winnipeg team.

On April 3rd, for the first time ever, Kyia faced off against her twin sister Kyanna, playing  for the championship.

“Not everyone can say they played against their twin sister, let alone in the national championship game,” said Kyia. “When the tip-off happened and we were in that space, it was honestly so surreal. It’s a moment I’ll cherish forever.”

Keneca was also in the stands to cheer both of her sisters on in the championship game.

“I just felt so excited for both of them,” she said. “I understand what it takes to get to the national championship and it was great to see them both there.”

While Keneca says it's sad that one sister had to lose in order for the other to win, she recalled a special moment at the end of the game where Kyia ran to hug Kyanna following the final buzzer, before celebrating with her teammates.

Couldn’t be a prouder big sister. I’m so glad I got to watch @kyiagee and @kyannagee play for the National Championship. Your embrace at the end brought me to tears. Love you so much ❤️💙 Congrats to @wesmenwbb on a great run and to the @ryersonrams for bringing the title home!

“Even though Kyia was the ultimate winner, she still wanted to see that her sister was alright,” Keneca said. “I think that speaks volumes about their character and I’m so proud of them both.”

“To have three sisters impact their teams and be part of winning teams to the level that all the Giles sisters have is incredible,” Clarke said.  “It is really special to have had an opportunity to coach Keneca and Kyia, and to see them celebrate each other's successes together.”