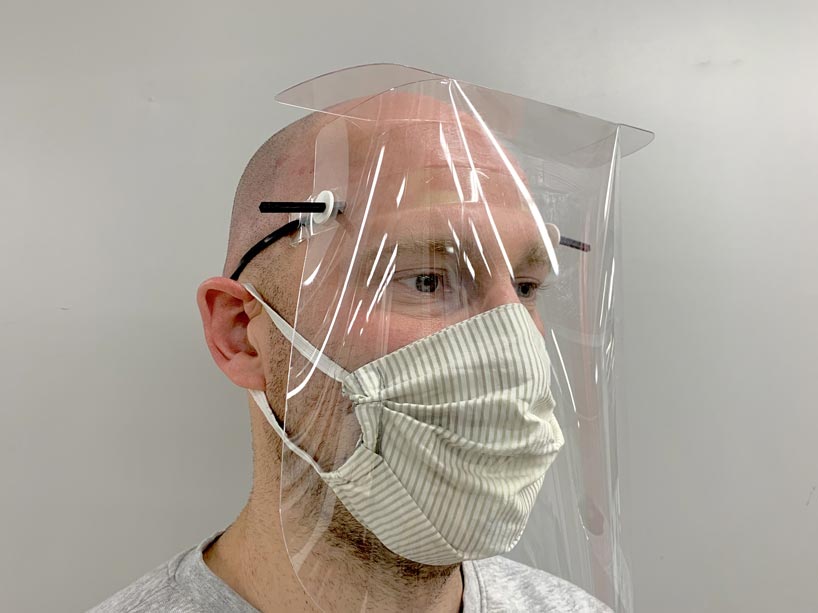 The Creative Technology Lab at FCAD face shield design was inspired by origami folds. This shield is reusable and protects front-line workers from viral droplets that come from above.

As director of Ryerson’s Creative Technology Lab at FCAD, Jonathon Anderson studies how industrial robotics can be used for creative purposes. At the onset of COVID-19, Anderson began using the 3D printers in the lab to design face shields for health-care workers.  It wasn’t a huge departure from his work; he had access to the resources and he understood the potential strain to Canada’s health-care system as well as the immediate need for personal protective equipment (PPE) on the front lines.

“I ran through about a hundred prototypes and ended up where we’re at now,” said Anderson, who shared each prototype with the Infection, Prevention and Control team at Unity Health Toronto for testing at St. Michael’s Hospital.

The “now” Anderson is referring to is an origami-inspired design that uses a laser cutter instead of a 3D printer, taking production time for one face shield from four hours to 35 seconds. Unlike other face shields, similarly made with Polyethylene terephthalate (PETG) sheets and laser-cutting technology, Anderson’s design is created from a single PETG sheet and has a unique fold at the top of the shield which protects wearers from viral droplets that may come from above.

Perhaps most importantly, Anderson’s face shield design is reusable with the help of disinfectant products.

St. Michael’s Hospital ordered 10,000 face shields for their primary and intensive care units. It took Anderson and his team just seven business days to produce them.

“Most traditional shields include foam,” said Naureen Siddiqui, who works in Infection, Prevention and Control at Unity Health Toronto and who provided feedback to Anderson on behalf of the front-line workers who tested PPE designs at St. Michael’s.

“But the problem with that is that it can’t be reused. Knowing that we could face PPE shortages, we were looking at the design with the lens of, ‘how can we reuse these?’”

The face shield design reduces cost by 60 per cent and reduces waste by using 91 per cent of the material on a single PETG sheet.

“These are a great substitute for the face shields that weren’t custom-designed for us ,” said Siddiqui. “They are better for the environment, better for cost and provide better protection.”

Anderson’s unique design was quickly approved by Unity Health Toronto and he received a Medical Device Establishment License (MDEL) from Health Canada for the Creative Technology Lab at FCAD.

“I really liked how quickly everything came together,” said Siddiqui. “The need for PPE has allowed for innovation in a very quick turnaround.”

“It doesn’t get any more front line than that,” added Anderson.