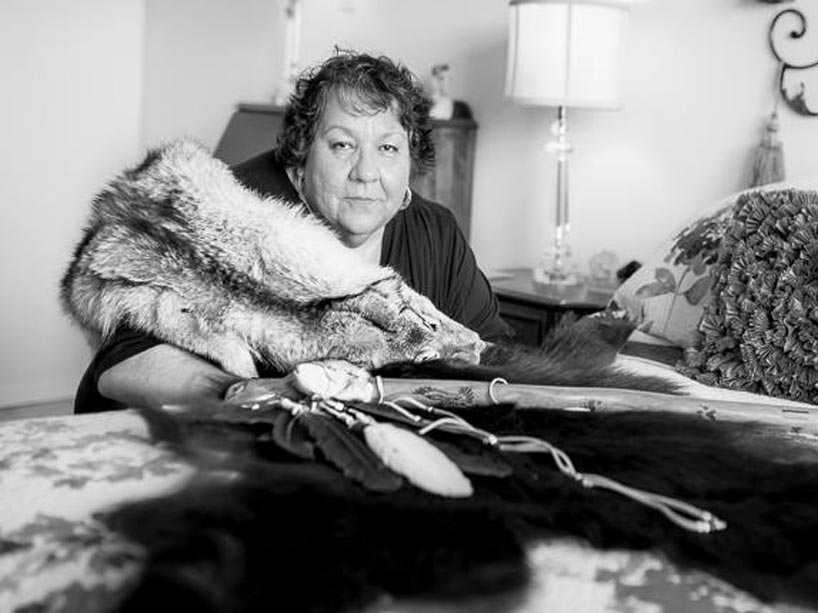 Joanne Dallaire, a member of the Wolf Clan, is pictured with wolf and bear pelts, and a ceremonial talking stick. In her community, the wolf is a symbol of teaching and leadership, and the bear represents healing and strength. Photo: Laurie Anne King.

Joanne Dallaire, Ryerson University’s longtime campus Elder, has been given a well-deserved seat at the leadership table in a new position. Her appointment as Elder (Ke Shay Hayo) and Senior Advisor – Indigenous Relations and Reconciliation is a significant step towards Ryerson’s commitment to increasing Indigenous representation at the senior level, and to embedding the community’s knowledge and perspectives into the university’s culture.

As Elder and Senior Advisor, Dallaire will report to the provost and vice-president, academic, with a dotted line to the Office of the Vice-President, Equity and Community and Inclusion. She will also attend Board of Governors, Senate and Academic Planning Group meetings, giving her a direct line to the university’s decision-makers and creating an environment for reciprocal learning.

“It is very important that the Elder be well-positioned to create awareness and to share essential insight on behalf of Ryerson’s Indigenous community,” said Dallaire. “To this end, it will be hugely beneficial to collaborate closely with like-minded leaders who have similar ideas of evolving the university.”

Dallaire’s career as an educator and counsellor has spanned over three decades, including work for the Ministry of Health Canada, the Centre for Addiction and Mental Health, and a range of First Nations and social service agencies. At Ryerson, she has led numerous educational events and ceremonies and has provided input to make the curriculum more reflective of Indigenous knowledge and culture.

“Ryerson has always valued the position of Elder because of the unique and vital perspective it brings to the university; this new role is a reflection of that,” said Mohamed Lachemi, president and vice-chancellor, Ryerson University. “Joanne has been an invaluable resource to our community and I’m delighted that she is now better poised to affect positive change for our students, faculty and staff.”

Over the years, Dallaire has noticed a marked improvement in the happiness and success of the university’s Indigenous students. She acknowledges that leaving home to attend school in a new community can be challenging, but credits Ryerson Aboriginal Student Services (RASS) with helping them become acclimated to campus life and preparing them for classwork.

“One of the most effective ways that we can uplift our Indigenous students is to ensure that they are represented on our administration and in our classrooms,” said Michael Benarroch, provost and vice-president, academic, Ryerson University. “As an aspiring leader in Indigenous education, we are committed to removing the barriers that will improve postsecondary learning – like doubling the number of our Indigenous faculty members this year – and Joanne will be instrumental in guiding many of those changes.”

“Joanne and I worked very closely together on the TRC consultation and community summary report,” said Denise O’Neil Green, vice-president, equity and community inclusion. “I congratulate her and look forward to working with her in this new senior leadership role.”

Dallaire’s immediate priorities include ensuring that her role is reflected in the university’s academic plan, connecting with new faculty members to better understand and meet their needs, and familiarizing herself with the Senate and Board of Governor's processes. She would also like to see more visible recognition of Indigenous faculty, staff and students around campus, and hopes that the university can play a role in helping to solve Canada’s First Nations water crisis.

Beyond Ryerson’s borders, Dallaire believes that it is crucial for those in positions of power – particularly those working in the education sector – to have a clear and fundamental understanding of the ongoing concerns of Indigenous Peoples. However, she stresses that supporters of the Indigenous community must take the initiative to educate themselves about the issues if we are to take meaningful steps towards reconciliation.

“I believe it’s very hard to get people invested in something that doesn’t impact them directly and that they don’t feel they had any role in causing,” said Dallaire. “When you educate yourself, however, you can be far more critical about the knowledge you seek and how you apply those learnings. Of course, that’s what universities do well – teach people how to think critically.”

And Dallaire is happy to be a resource.

“My door is always open,” she said. “If anybody – student, faculty or staff – wants to have a conversation, I’m here. You don’t have to be Indigenous. I’m absolutely supportive of any kind of query because that’s how we learn. There’s no such thing as a silly question in my books.”

One question that she often fields is if there is a universal understanding of the meaning of “truth and reconciliation”. Dallaire feels that it is dangerous to encourage society to have only one way to approach it. Instead, she considers reconciliation as an opportunity for people to expand their minds.