Desmond Cole on the politics of white supremacy

Journalist and activist explored the relationship between white supremacy and privilege at White Privilege Conference
By: Will Sloan 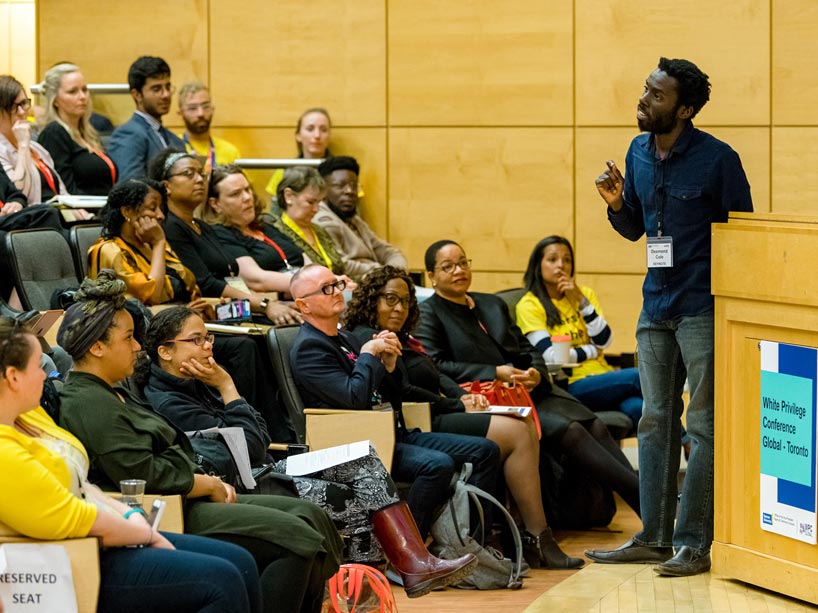 Photo: Journalist and activist Desmond Cole was a keynote speaker at the White Privilege Conference Global on May 11 at Ryerson. Photo by Clifton Li.

While on the campaign trail in 2014, future Toronto mayor John Tory was asked by a reporter if white privilege still exists. Tory answered: “White privilege? No, I think - no, I don't know that it does, I mean I think that there are people who are left behind. And where I think what they need is a hand up from people of all different skin colours and religions and backgrounds.”

On May 11, journalist and activist Desmond Cole revisited Tory’s statement during his keynote address at the White Privilege Conference Global, held at Ryerson University. Cole, a passionate voice against anti-Black racism, went through Tory’s comment piece-by-piece.

“The first thing he said was, ‘White privilege?’—as if he had never heard the term in his life. I thought that that was very interesting, and I think that it’s a privilege when you’re John Tory to potentially not know what white privilege actually is. To be able to go around the world and be surprised when somebody asks you a question like that.”

Moving on: “But then he says, quickly, ‘No.’ No! ‘I think – no.’ He catches himself, right? Because he’s maybe going to give a nuanced answer, but he wants to make sure for all the white people in the audience who are listening that … the first thing he tells everyone is, ‘Nah. I’m shutting that down. That’s probably not a thing’”

Moving on further: “‘There are people who are left behind.’ I agree! … John Tory did not name who those people were in his response, though. He just says that they exist, and that they’re left behind. This is brilliant, because by not naming these people or talking about what they look like or where they come from or what their circumstances could be that could have led to them being left behind, he allows anyone out there to imagine whomever they want.”

As for that “hand up” from people “of all different skin colours and religions and backgrounds,” Cole called it a “collapsing of the idea of marginalization and disenfranchisement and racism and white supremacy, quite frankly. Because we don’t really need to know anything specific about the people who are being left behind—but what we do need to know, according to the now current mayor of the City of Toronto, is that it’s everyone’s responsibility if anybody is being left behind.

“My question is: if you’re part of a group that is systemically left behind, how much helping can you really do?”

Does Tory now believe white privilege exists? For Cole, the answer is irrelevant. In some ways, a shift is happening: Cole predicts that the next generation of centrist politicians will be increasingly obliged to acknowledge white privilege. But the strategies used to soften the concept are growing more sophisticated and insidious.

“We’re going to go more and more from people like John Tory being like, ‘It doesn’t exist,’ to actually white people trying to champion white privilege so they can change the definition of it, and move it away from notions of white supremacy.”

For Cole, one of the places where white supremacy manifests itself most visibly is through policing. Cole has been a prominent critic of the Toronto Police, and was recently part of a successful campaign to remove their presence in TDSB schools. He alluded to recent police killings of unarmed black people when bringing up Alek Minassian, the suspect in the recent Toronto van killing.

“Because the police officer chose not to add to the death toll, he was immediately exalted as if he were a hero. As soon as I heard that the person who had done this, or was believed to have done this, was taken into custody, I said: ‘White dude.’”

Cole unpacked the impulse to “lionize” the police officer: “The one thing that was said over and over again was, ‘It’s amazing that Ken Lam did not shoot the suspect, but if he had, that would have been completely understandable.’ … When the Toronto Police shoot somebody who is Black, nobody says they’re a villain—as opposed to this guy being a hero for preserving life. There are all kinds of prepackaged excuses for why that Black person needed to die.

“It’s weird to make somebody a hero for preserving life, but not to be angry at somebody for taking life away. And in my opinion, this incessant need to say, ‘He didn’t kill this time, but if he wanted to, he could have’—that is reminding us that the next time a Black person is in this situation, you have the permission to pull the trigger.”

Held May 9 to 12 at Ryerson University’s George Vari Engineering and Computing Centre, the White Privilege Conference—Global packed a wide range of events into its four days: six pre-conference institutes, seven keynote presentations, and 65 workshops, with 508 registered delegates. Other highlights included a Youth Action Program that brought together 230 middle-school and 170 high-school youth from across the GTA; a marketplace of more than 20 vendors; and the 10th annual Viola Desmond Awards & Banquet Dinner, which welcomed almost 400 attendees.

Keynotes and other speeches from the White Privilege Conference Global are available to view through Ryecast. Desmond Cole’s speech begins at 47:40 at ryecast.ryerson.ca/80/Watch/12580.aspx.

Related stories:
What is white privilege?
Getting comfortable with the uncomfortable