Another side of La Loche 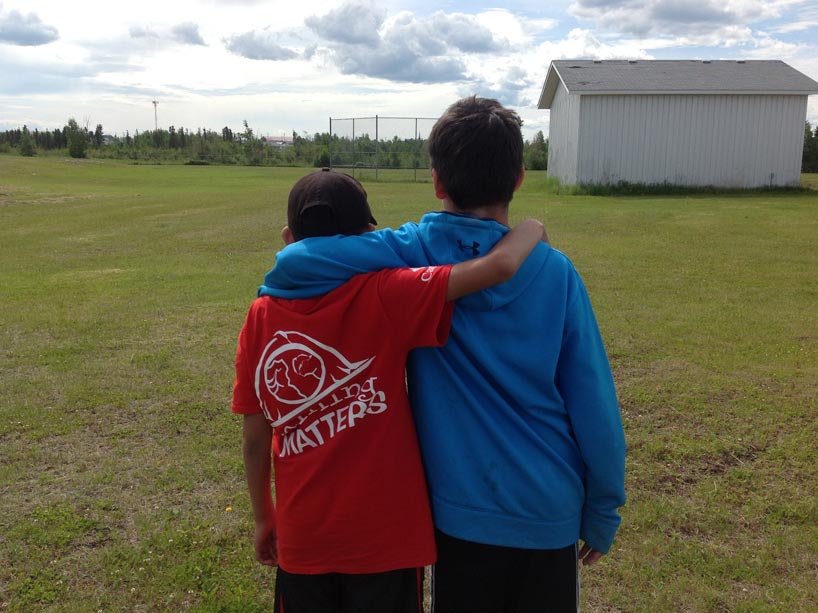 You heard about the shooting in La Loche, Saskatchewan that left four people killed and seven injured. You read that it left the small, rural, mostly Indigenous community shattered. But how much do you really know about this land and its people?

Caitlin Wood is a graduate of Ryerson’s MA program in Early Childhood Studies, and now a field educational assistant at the university. She also has a direct link to the shooting: her older brother, Adam Wood, was one of the people killed at La Loche Community School, where he was a teacher. The pain of the loss was only compounded by the image of La Loche that appeared in the media. As the tragedy was reported across the country, she grew frustrated by the absence of voices from the community’s youth.

For her master’s research project, Wood travelled to La Loche in summer 2017 to speak to youth about their community. Working with school administration there, Wood connected with 11 students between ages 13 and 19 and asked them to take artistic photographs that would represent La Loche.

“The external media was very one-sided, very focused on the negative,” said Wood. “They really looked at the challenges rather than representing the community in a fuller picture.

“What was uncovered in the research was a more holistic approach to seeing the community: the pride the youth had in their community; the pride they had in their culture; the importance of their relationships. Those pieces were very much missed when it was initially reported, and continue to be reported, by outsiders.”

In guiding the photography, Wood asked students to consider five questions: What is your life like? What is good about your life? What makes you strong? What needs to change? What should childhood look like? Wood later recorded the students discussing their work.

“A lot of the project and the reason I took it on was my firm belief—which was very much fostered within the program—that children are very capable of sharing their expertise on the world, that they have rights that need to be acknowledged and practiced, and that it’s our responsibility as educators and adults who work with youth to provide spaces for those rights to be actualized.”

With her personal connection to the tragedy, Wood occupied an uncertain space in the community. “In a lot of ways I was seen as an insider, but I still was an outsider. I had to work on that rapport with the administration and the participants. I had to foster and facilitate that relationship. I think the trust still had to be earned.”

One obstacle to overcome was her own Euro-Western perspective. She understood that relationships were important in the community, but she had to redefine her understanding of what a relationship is. “The youth talked about the importance of nature and the importance of animals. I realized that the way that animals and nature were being spoken about, it wasn’t just these ‘items,’ these inanimate objects, but a relationship.

“It was pointed out to me by Dr. Lynn Lavallée (former social work professor at Ryerson), who told me that that’s part of an Indigenous wholism—that relationships don’t exist just with people, but in a web that includes all living things, including animals and nature. That was really revealing about the limitations of my own perspective, and reminded me of the importance of being reflective in my thinking.”

Wood has presented her findings at Lakehead University; the Nokiiwin Tribal Council conference on Indigenous Health, Safety and Wellness; and at Ryerson’s ECS Graduate Showcase, external link on May 12. Given Wood’s connection to the tragedy, a question arises: is this project part of her own healing process?

“I don’t like saying ‘healing,’” she replies, “because nothing is linear. I think what this incident brought to my life was a strong awareness of when something this large happens, I can either grow from it, or I could rot. There are these two extreme ways I could go. I’ve been focusing on the ways I can grow.

“I think that as a person, my awareness grew, and my relationships with the community grew. But healing? It’s too messy to be able to map, at least for my own self. But there has been definite growth.”