The future of math is in Africa 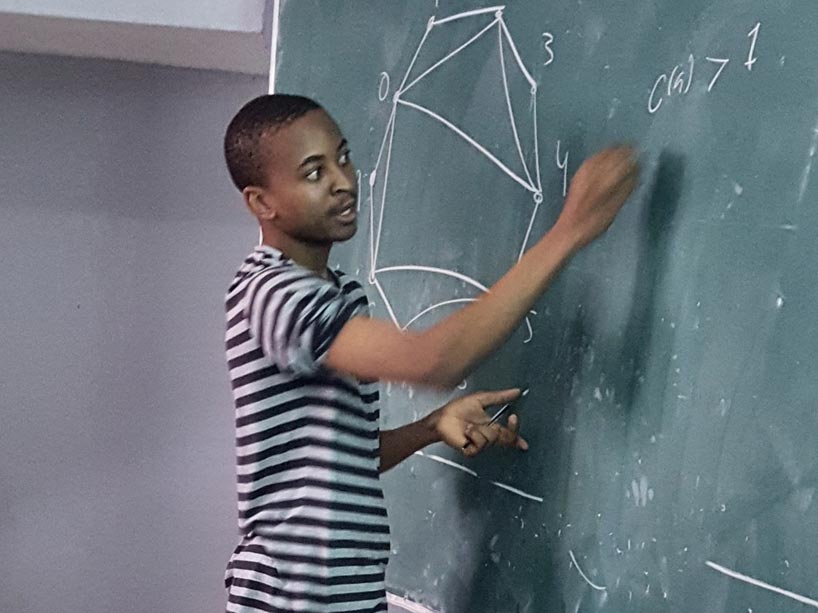 Photo: The course (part of a one-year pilot agreement between the Faculty of Science and AIMS Cameroon) taught students from 13 African countries.

The future of mathematics is in Africa. That’s the conclusion of Ryerson math prof Anthony Bonato, who spent March in Cameroon teaching an intensive three-week course to students from 13 African countries.

“Students here in North America have many more opportunities to study,” said Bonato. “There are still financial barriers for many students, of course, but in Africa, it’s at a different level. I think in the 21st century we’re going to see the study of mathematics, advanced mathematics, new math explode in Africa—and that will parallel the growth of STEM in general in the continent. The students I taught were excited about learning, and I think it’s just a question of opportunity for them.”

The course is part of a one-year pilot agreement between Ryerson’s Faculty of Science and the non-profit AIMS Cameroon, external link to bring graduate mathematics education to Africa’s most promising students. Bonato is the first Ryerson mathematics professor to teach in Africa. “Ryerson’s niche of applicable, real-world studies—biomathematics, financial mathematics, network science—is of real interest to them,” said Bonato.

The class on Modelling and Searching Networks was based on a graduate course Bonato has taught at Ryerson. The 30 students came from countries ranging from Benin, Cameroon, and Kenya, to Senegal, Sudan and Zimbabwe—all pursuing a master’s degree through AIMS after completing undergraduate mathematics. “For many of the students, it was the first time they learned about network science and graph theory,” said Bonato.

One of Bonato’s Canadian students—doctoral student Erin Meger—joined the trip as a TA. “I knew it was going to be a once-in-a-lifetime opportunity, and it absolutely was,” said Meger. “I’ve never met such hardworking students in my life, and I’ve been TA’ing for six years. Every single student was prepared and enthusiastic, and they met each challenge they faced with optimism and enthusiasm.”

Teaching in a developing nation has its challenges, including power, internet, and water outages, and even outbreaks of illness. “One of my students got malaria during the course, and had to be hospitalized—that was a wake-up call. One of my TAs caught typhoid fever and was very sick. It was like a regular course—we had a great experience teaching, but there were these wake-up calls every once-in-a-while that you’re not in North America.”

“There are always struggles in a place that has been so torn down by colonization,” said Meger. “I had one student with malaria who still handed his assignment in on time. That dedication, and that level of passion, was amazing.”

The dedication of the students resonated for Bonato. “They all could speak English but at various levels of proficiency,” he remembered. “There was even a student we had from Sudan who was struggling with it through the course, but I learned later that when she first came to AIMS six months ago, she didn’t speak any English at all. She managed to get through the course, and she did well.”

Bonato has blogged about his journey on his personal website, external link.