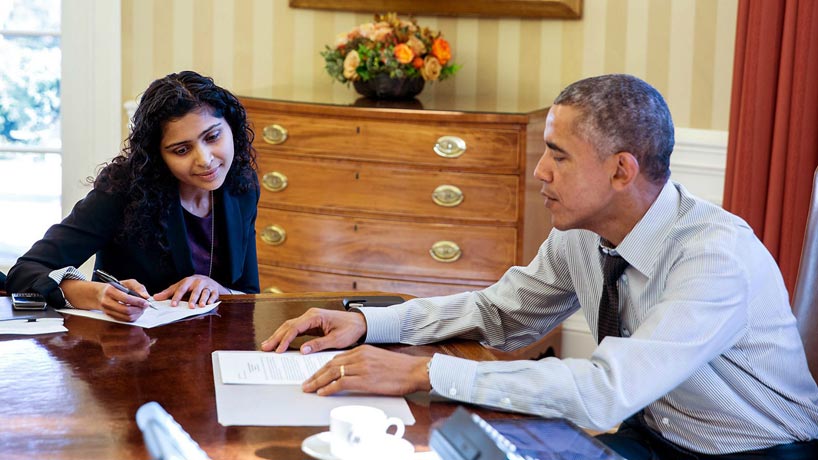 When Barack Obama became president, Twitter was in its infancy, Facebook didn’t have an app, newspapers were still the dominant news medium, and Fox News was watched by more than just your grandpa. In 2017, the media landscape has grown more fragmented than ever. How can communications professionals break through the noise? For Sarada Peri, external link, the answer is: get back to the basics.

Peri was a senior speechwriter to President Barack Obama during his second term, a member of the 2012 and 2016 Democratic National Convention speechwriting teams, and a principal at the speechwriting/strategy firm West Wing Writers. On October 30 and 31, she’ll visit Ryerson as a Distinguished Visiting Fellow to lead a workshop titled Breakthrough Messaging, external link hosted by the Ryerson Leadership Lab, external link.

In advance of her visit, Peri spoke with Ryerson Today about how political messaging has changed… and how it has remained the same.

You’ve said that the media landscape has grown very crowded, and messaging is more challenging than ever, but in your workshop you want to get back to the basics. Do you think the core fundamentals of effective messaging have remained the same?

I do. I think that a message that is clear and compelling and tells a story and is authentic is still what can break through. The challenge, of course, is that in this fractured media environment, there are so many different outlets through which your message is refracted. That can make it challenging to even be heard. But I think the fundamentals of what moves people remains the same.

Effective politicians often have simple, direct messages, like Obama with “Change” and “Hope.” In 2016, Trump had “Make America Great Again” and “Build the Wall,” but I can’t conjure up what Hillary Clinton’s message was. I can’t imagine either of us are Trump fans - do you think the election offered a lesson in effective messaging?

I do think that that campaign message of “Make America Great Again” was compelling to a lot of people. But I also think that the media granted him a whole lot of space. They publicized him in ways that they had never done before because he was an entertainer, and because of the entertainment value. So, it’s a little hard to parse out what was effective in terms of his message, and what was effective in getting him more airtime and publicity because he had this sort-of celebrity factor.

Obama was in the business of messaging. What do you think was an example of a time when he was really effective in his messaging, and what can we learn from it?

Obviously during his first presidential campaign, he really was able to capture the country’s hearts and minds with this message of hope. It was at a time when people were looking for that leadership in the wake of the George W. Bush presidency, and the long wars we’d been in and the economy starting to tank. He came in with a message that we were a lot more united than we were divided, and I think the lesson there is that people ultimately are not motivated by fear, they’re motivated by hope. Truly successful leaders who win national campaigns and govern effectively are the ones that offer their citizens a vision for something to be a part of that’s bigger than themselves, and I think that’s where he was successful.

He was president during eight years that saw enormous shifts in how information is disseminated. Did you sense any change in his messaging strategy?

I didn’t work for him for all eight years—I came on during his second term—but I think his emphasis on who we are as a country, which won, never changed. His message of hope never changed; his message that the people are the change, never changed. Now, how that message manifested itself while governing of course shifted in a whole host of ways, but I think the fundamental story he told about the country never changed.

What can we expect from the event at Ryerson?

I’m excited to meet with students and speak to an audience I haven’t been with before, and just learn more about how you all see the world. I think it will be a fun, pretty laid-back look at communications, and I’m looking forward to having conversations with the folks at Ryerson. It’s an exciting place.

Finally, what can you tell us about Obama, the man?

I guess I would just say that he is exactly as great a guy as you might think he is!