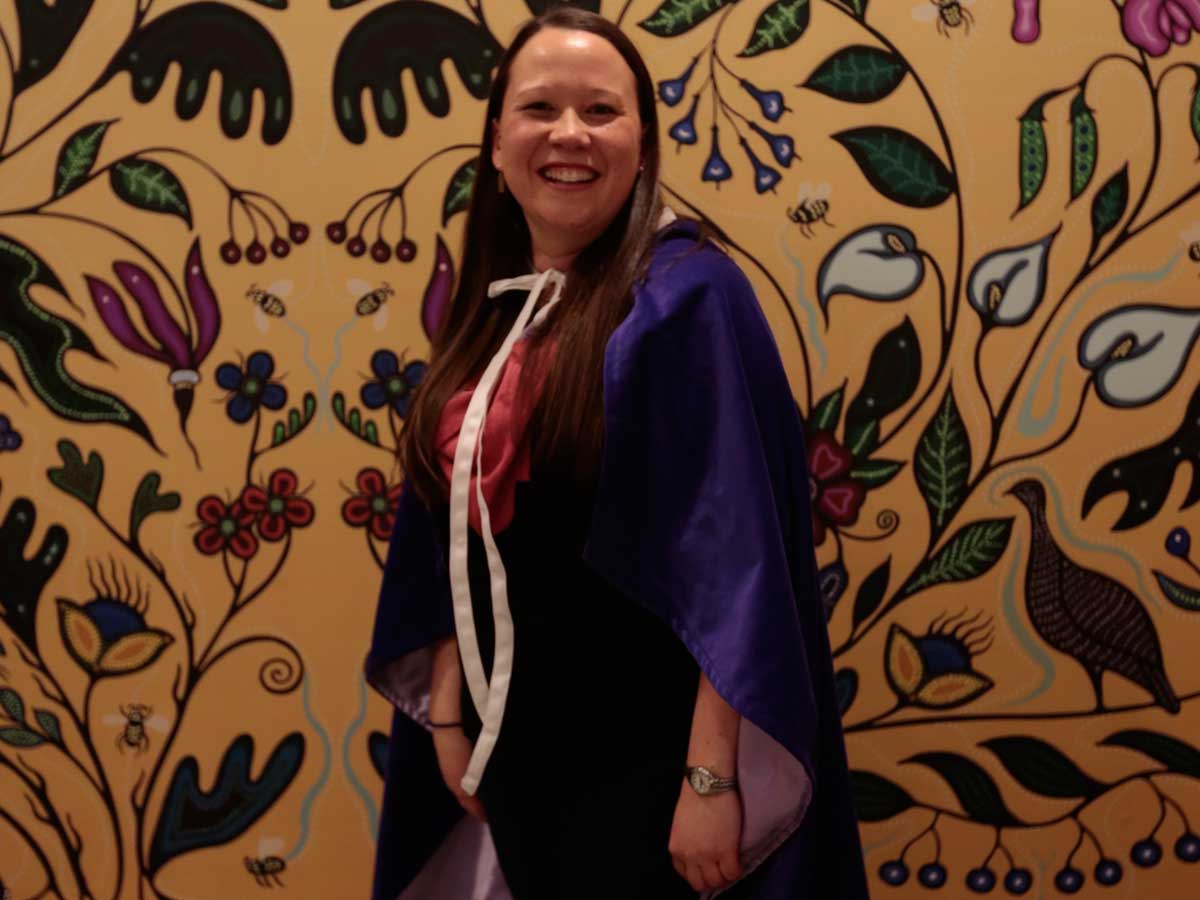 “There are a lot of great moments when you’re a midwife,” said Claire Dion-Fletcher, 2013 graduate and current aboriginal student co-ordinator for Ryerson’s Midwifery Education Program, opens in new window.

“I’ve been to a birth where I caught one woman’s baby and then caught her sister’s baby, and then two years later caught her baby again. The grandmother was at the birth, and I’ve delivered all three of her grandkids. That’s pretty great.”

For Dion-Fletcher, an indigenous (Potawatomi-Lenape) registered midwife at Seventh Generation Midwives Toronto, a key role of midwifery is the role it can play in community—especially indigenous communities. “Just seeing women from the very beginnings of their pregnancies, and really working hard to take care of themselves and their babies, and then being there when they’re having their babies and taking their babies home… it’s really a very rewarding, an exciting career.”

On February 16, Dion-Fletcher received the inaugural Iewirokwas Cape Award for Midwifery Heroes from the Toronto Birth Centre. The award is given annually to two Ontario-based midwives who have made significant contributions to midwifery and their communities (Christine Roy was also honoured). It recognizes midwives both indigenous and non-indigenous who work for equity, justice and inclusion in the province’s diverse rural and urban communities.

Dion-Fletcher’s interest in women’s health was sparked in high school, when she travelled to Guatemala as part of the Hands of Hope for Children (among other activities, she volunteered in a medical clinic). While at a women’s studies class at Dalhousie University, she wrote a paper on the medicalization of childbirth in Ontario, which led her to investigate midwifery. “I was interested in women’s health, and specifically components of women’s health that allow women to take a more active role in their health care, and more control over their health and their bodies,” said Dion-Fletcher.

“I was like, ‘I wonder if people still do this,’ and I started looking it up, and found the Association of Ontario Midwives’ website, and found the Midwifery Education Program at Ryerson. I just felt like: I can do this. It was a good combination of my love and science and health, and also my feminism and interest in social justice.”

Now practicing in Toronto, she is co-chair of the Toronto Birth Centre Community Council and sits on the core leadership of the National Aboriginal Council of Midwives. Maintaining her connection with Ryerson’s Midwifery Education Program, she serves as the program’s aboriginal student co-ordinator, where she supports students through events, workshops, and one-on-one mentoring.

“It’s great that they have my position at Ryerson where I’m able to provide additional support for students, because not all university programs have that,” said Dion-Fletcher. “And the number of community-based midwifery programs is very small.”

Though Ontario’s midwifery registration has an exemption clause for aboriginal midwives trained through community-based programs, “they’re not funded in the same way as registered midwives are, and funding is a big problem, and is something that really limits.”