Syria was once a beautiful country 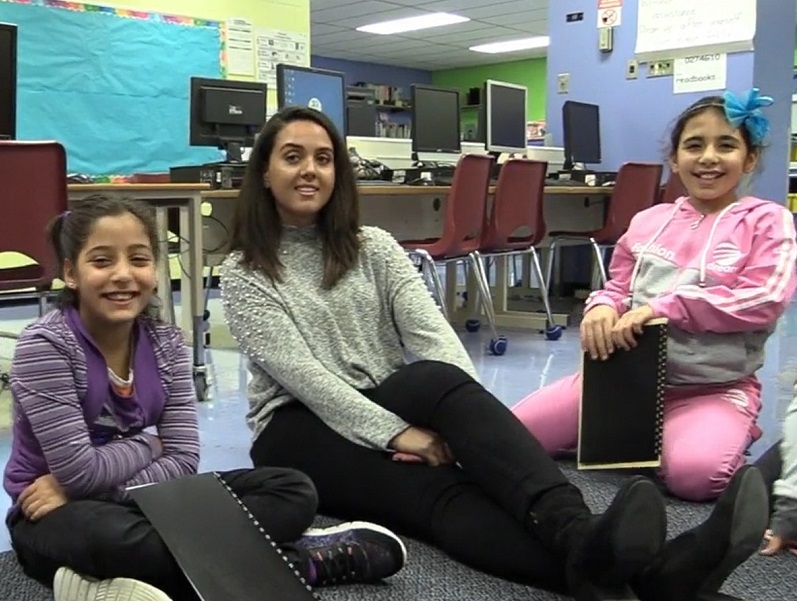 Photo: a film still from a new research video that documents the memories of Syrian refugee children

A new research video, external link, opens in new window documents the memories of 13 children from Syria who arrived in Canada as refugees.

The video is an outcome of a research project called Syrian Refugee Children’s Narratives of Experience, led by Mehrunnisa Ali, a professor in the School of Early Childhood Studies. The project engaged the children in creating autobiographies based on memories of their lives in Syria, a transit country and Canada.

Interviews and focus group discussions were led by Gina Jibran and visual data were recorded by Nancy Chahine, both alumni of the Early Childhood Studies graduate program. Cyrus Sundar Singh, a filmmaker from the doctoral program in Communication and Culture, helped to create the video documentary.

“When the war started in Syria, we ran to other countries,” a child’s voice states, as the video starts. “People always ask grown ups about what happened, but no one asks children,” it goes on. “But Mehru, Gina and Nancy asked thirteen of us, what we remembered about Syria, the countries we ran to and our early days in Canada.”

“I remember from Syria that my family and me, we had a lovely house,” a boy named Musaab says, as a colourful drawing of a house fills the screen. “Syria was once a beautiful country and life, and then it became ugly,” Jibran reads from a child’s autobiography.

“There was a gun, and they were shooting, and my mom ... it just hit her hand,” a girl named Shahed says, describing how her mother was shot during the violence in Syria. “The first day of school, I just went one day to school, because the war started and they started shooting,” a boy named Ahmad explains.

“We sold our old stuff to buy the passports,” says a boy named Mohammad, on his family’s plans to escape the violence. “And then we ran away to Jordan,” a voiceover explains. “The school in Jordan was so bad, because if you came late, they hit you with a ruler,” explains a boy, as an animated version of his drawing illustrates his point. In Jordan, “the government did not allow Syrian people to work, so they used to work in secret,” says another boy.

“But one day, my dad came to me and said, we need to go in Canada,” a girl says, as her  illustration of a plane fills the screen. “Canada is safer than Jordan, because Jordan they don’t care about you,” says another girl. “I like Morningside park,” Jibran reads from Ahmed’s autobiography, prompting him to explain. “We mostly go to it ... and we do barbeque and we eat,” he says.

The lead researcher, Ali, created this film in order to “see and hear children better, especially those we know very little about.”

“For too long, [children] have been thought of as persons in making -- who don’t necessarily need to be treated as individuals with their opinions, ideas, thoughts and memories,” she says. “I thought that it’s really important to capture their stories, especially because these stories will get lost if we don’t capture them now. Memories fade.”

The video highlights the multidimensionality of Syrian refugee children, who are often stereotyped as victims in Western media. “That kind of stereotyping not only diminishes their humanity,” Ali says, “it is simply wrong to reduce any individual or any group to one stereotypical dimension.”

“They have so many different dimensions,” Ali continues. “They are funny, they are wicked, they are thoughtful, they have experienced bad things, but they are also tremendously resilient … their lives are rich and multidimensional,” she says.

Research projects involving children are scarce, and Ali thinks that needs to change. “With processes of ethics approval, it is difficult to get access to children,” she explains. “We have to go through their parents, we may have to go through other gatekeepers … with refugees it’s even more complicated. So we just avoid talking to children because it’s much harder.”

“We as adult researchers need to approach research with children with a lot of humility and with an open mind,” she says. “We simply need to do much more research with children … If we don’t do it, we continue to paint them with a single brush, which diminishes them and reduces our ability to appropriately support them.”

This research project was funded by the Social Sciences and Humanities Research Council of Canada, the Child and Youth Refugee Research Coalition and the Faculty of Community Services, Ryerson University

Watch the video: Syria was once a beautiful country, external link, opens in new window