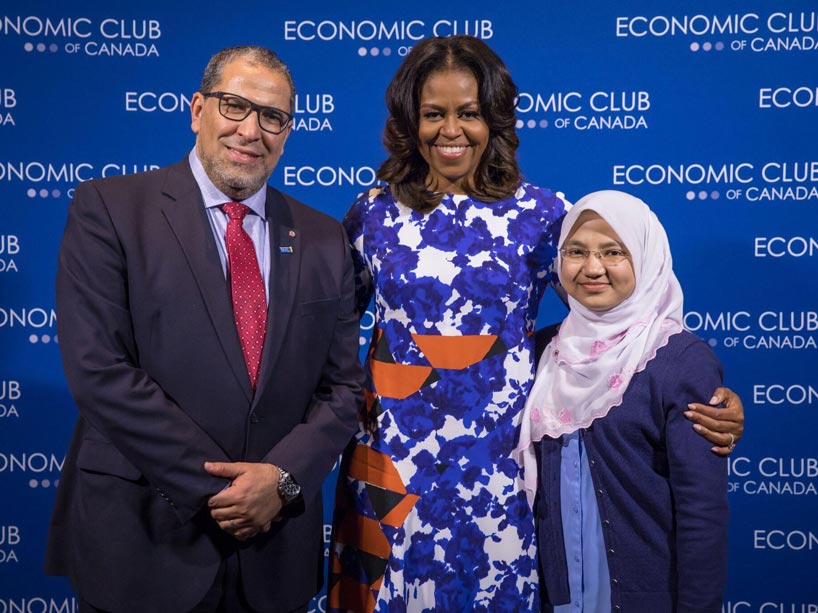 The November 28 event, titled “The Economics of Equality: Advancing Women & Girls to Change the World” and presented by the Economic Club of Canada and Plan International Canada, saw Obama participate in an onstage with Economic Club CEO Rhiannon Traill. And though the current president was not mentioned by name, those who attended felt the event was a powerful rejoinder to the prevailing national mood.

“One of the key points to come out was how to act in the current political climate,” said Victoria Morton, media production ’17 graduate and student representative on the Ryerson Board of Governors. “My favourite part was when she talked about how to handle someone who doesn’t like you. Her advice was: ask a question to them. I thought that was really inspiring, because it’s so hard to show empathy for those that don’t like us. Michelle Obama said, ‘My advice is to ask what happened to them.’ It’s an important takeaway.”

Ryerson president Mohamed Lachemi took the opportunity to introduce the former first lady to Ryerson student Khin Yadanar Phyu. “Khin comes to Ryerson from Myanmar through the World University Service of Canada’s Student Refugee Program—proof that education can change the world,” said Lachemi. “Michelle Obama encouraged Khin to be a role model for her Rohingya people. The international community has labelled the Rohingya as the ‘most persecuted minority in the world.’ Unfortunately, the international community has failed the Rohingya people in the current crisis.”