There’s energy in the air 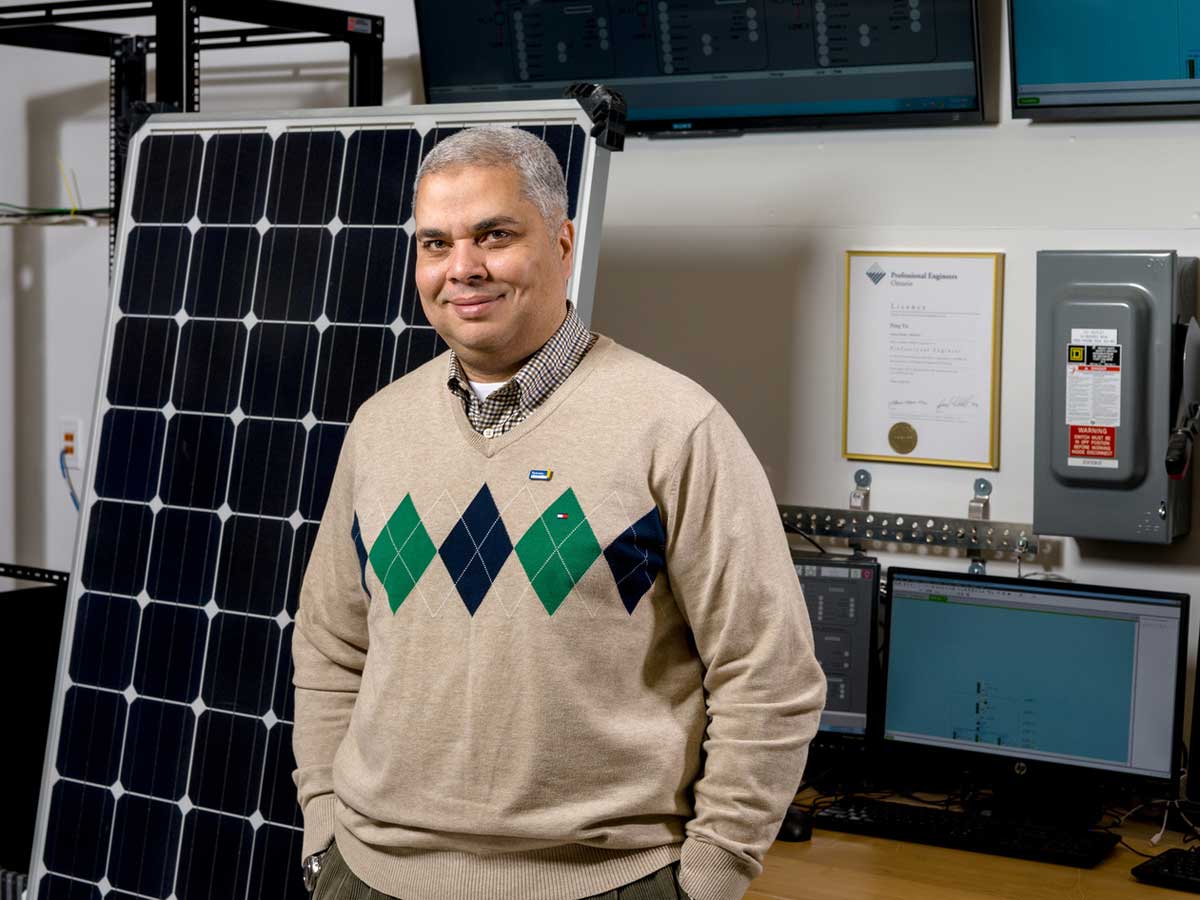 There’s energy in the air… overhead, to be exact. Researchers from Ryerson’s Centre for Urban Energy, opens in new window (CUE) have developed the world’s first energy storage unit that can be mounted on top of a utility pole.

This unique project, the result of a collaboration between Ryerson University, Toronto Hydro, and Scarborough-based energy-storage company eCAMION, external link, opens in new window, has been in the works for three years. The first unit, essentially a large battery (approximately 2,160 iPhone 7 batteries), was installed last summer, 15 feet above Toronto’s Keele and Shepherd area, for its testing phase.

“All of the previous installations of energy storage systems worldwide have been mounted on concrete pads in the ground,” said Mohamed Awadallah, member of the research team at CUE. “However, especially in highly urbanized areas where your system can be accessed by animals and kids, there is risk involved. Why can’t we design a module that can go up on a utility pole, and that’s going to be safer for interaction with inhabitants of an area?”

In addition to their safety component, energy storage/ battery units are key to unlocking the potential of renewables like wind and solar. “The innovation here is that we’re turning attention to the possibility that there is another place you can put your energy storage units, and the units will still function acceptably.”

The project was launched in late 2014, with support from the Government of Ontario through the Ministry of Energy’s Smart Grid Fund, external link initiative (which supports projects connected to the province’s smart electricity grid). The team of Ryerson researchers (Awadallah, Bala Venkatesh and Manuel Baun) and students developed a smart controller, which would connect to eCAMION’s modular storage unit. Electrical design and mechanical design occurred simultaneously, with a proof-of-concept model eventually built at CUE. “The unit is automatically controlled—it schedules itself in an intelligent way,” said Awadallah.

“Parallel to this, we contacted Toronto Hydro,” added Awadallah, “which gave us the specifications of the potential pole to host this unit. This was the starting point for the mechanical design part: how the cabinet will look, how the equipment will be inside the cabinet, how the weight of the cabinet will be distributed, and so on.”

The unit is energy-efficient: it uses lithium-ion batteries that charge during off-peak hours and discharge during peak hours. “Residential load profiles are characterized by hills and valleys—they fluctuate,” said Awadallah. “We try to rectify these fluctuations as much as we can through this unit. Part of the control algorithm was to optimize the utilization of the available energy in the unit to meet the requirements of a forecasted load curve.”

With the pilot project a success, commercialization is the next step. It might not be long before one of these battery units ends up on your street.