Students from FCAD and Transmedia Zone work with CBC on We Are Canada project
Category:Canada 150
By: Will Sloan 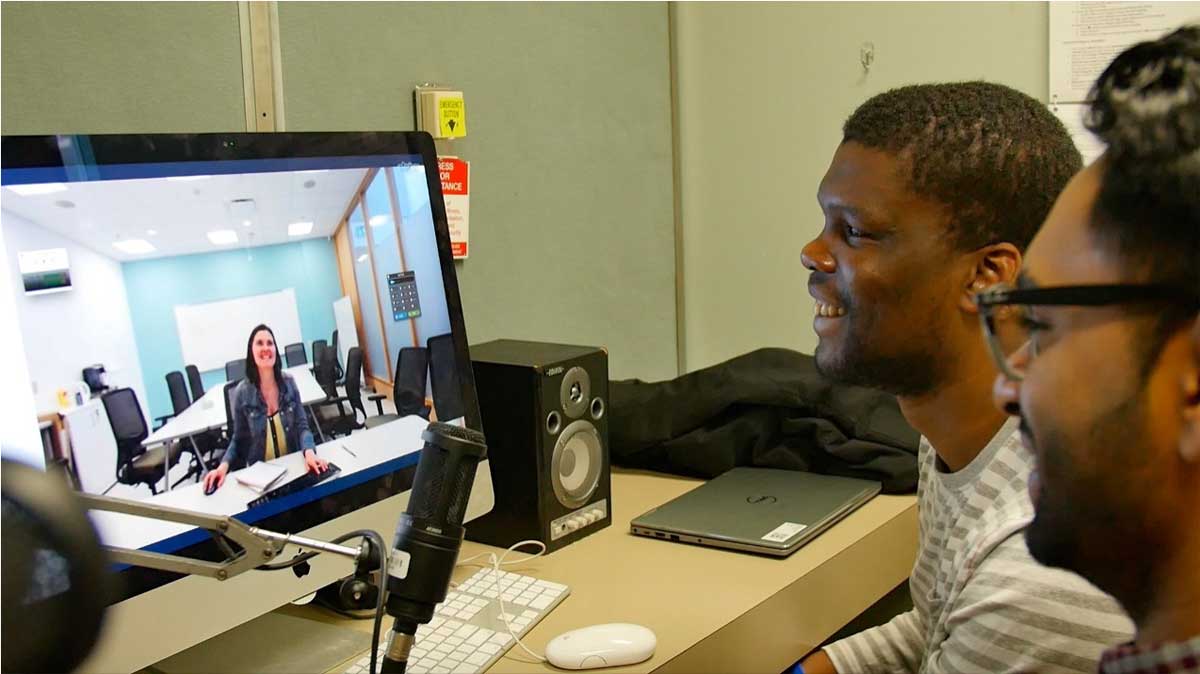 Photo: Master in Digital Media students Kimron Corion and Nitish Bissonauth work with Meredith Adrien Drost (via Skype) on the We Are Canada project.

In conjunction with We Are Canada, external link, opens in new window—a documentary series profiling millennial innovators for Canada's 150 birthday, beginning April 9 on CBC television—Ramona Pringle's class is completing a series of digital videos for the program's web content. In collaboration with the CBC and White Pine Pictures, they put out an open call for young people who are doing innovative work in their communities. Responses came in from across the country—Iqaluit to Victoria to Prince Edward Island—covering a broad spectrum of Canada's diversity.

"For students, there are the obvious skills, which are production skills: editing, chase producing, storytelling, scripting, paper editing, and all of those basic skills," said Pringle. "When you graduate, chances are somewhere along the line you're going to be posting a video to Kickstarter and Indiegogo telling your story and creating visual content."

Working in groups of three, the students created 18 video profiles, conducting interviews via Skype and working with their subjects to collect additional material (photos, videos, etc.). The range of stories is diverse, including: a woman delivers organic feminine hygiene products to her subscriber's home, donating 5 per cent of the proceeds to ZanaAfrica Foundation; a Syrian refugee who has opened a chocolate shop in Halifax; and a startup business that specializes in fashionable prosthetics for disabled people. "The students have the technical and storytelling skills to bring it all together, but they're also relying on the people they were profiling for some of the materials," said Pringle.

"For three second-year students to design something for a big company like the CBC is big," said Cyrano Sanna. "We learned stuff on the production side, the editorial side, and even interviewing people. We had to get an emotion out of them, so it's about knowing the right questions."

"It's eye-opening in terms of what I want to work on," said Daniel De Medeiros. "I want to work on video editing, my communication skills, and even just learning to be more professional."

For Beatriz Campos, the biggest challenge of the project came in the editing. "For me, it was making choices. There were so many important points, and we only had two minutes, so we had to choose how best to portray what he's talking about, even though we were just scratching the surface. It was about choosing what was best for the person—not necessarily what was best for me."

There is also a social dimension to the project, Pringle added. "If you’re working with somebody else to tell their story, there's a certain amount of respect and sensitivity that's required. We're dealing with people who come from different backgrounds than people living in downtown Toronto, and if you're telling your story, it's not from your point of view—it's from theirs."

*This is the first story in a Ryerson Today series about Canada 150.