What climate change means for Ontario

“There is nothing more urgent than this,” says environmental commissioner of Ontario
By: Will Sloan 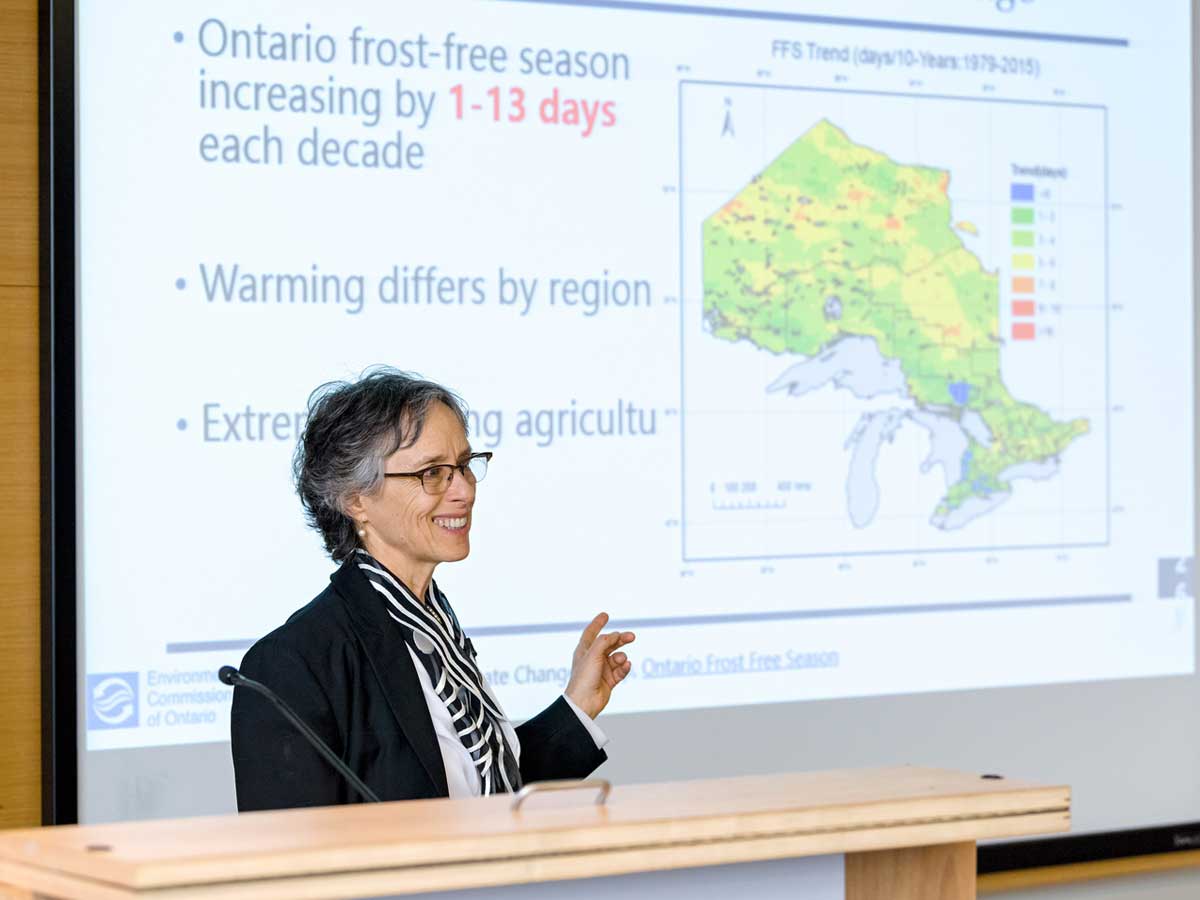 Dianne Saxe, environmental commissioner of Ontario and long-time environmental lawyer, visited Ryerson on March 7 to discuss the impact of climate change on the province and the world. From the start, the talk (organized by the Centre for Urban Energy, opens in new window and titled “Facing Climate Change”) painted a bleak picture. “Is climate change as bad as we think?” asked Saxe. “No—it’s worse.”

Speaking to the audience at Heaslip House, Saxe said that world governments have delayed their response to the world’s most important issue to the point where its impacts are now irreversible. “Most people still think of it as being primarily a problem for other people, in other places, later. And that’s true to a very significant extent, because climate change is going to be—and is already—much, much worse for other people and in other places. But it is also already a big issue before us, and that’s what I’m finding that people often just don’t understand.

“Everybody in government I’ve ever met has always had a desk full of urgent things to do, and so long-term stuff like climate change has always been pushed aside. … What I’m telling them now is: it’s too late. You can’t put it off anymore. There is nothing more urgent than this.”

The statistics are alarming. The world is producing its highest carbon dioxide emissions ever, with 2015 emissions 63 per cent higher than 1990. We are experiencing the highest quantity of carbon dioxide in the air in human history (406 parts per million, compared to 350 in 1988 and 278 in 1750), and the highest temperatures in human history (the only areas experiencing colder-than-average temperatures are the ocean areas where ice caps are melting). In 2015, Iran’s temperatures hit 74 degrees Celsius—virtually incompatible with human life.

These numbers have disastrous consequences. Higher average temperatures unevenly distributed lead to a disruption of natural cycles, and more damaging extremes. More heat on the ocean and higher sea levels means wilder storms. Unusually warm and dry weather also means a higher risk of fires. There are also the economic implications of lost industries and vast parts of the world becoming uninhabitable. “The U.S. is predicting a drop of 5 percent per person in GDP just from temperature,” said Saxe. “If more of the U.S. population feels they’re losing ground economically, what does that do politically?”

Saxe noted that Ontarians are among the lucky ones (we’ll spend less on heat and won’t experience mass migrations). Still, Ontarians stand to lose a big chunk of GDP from forest fires, floods, droughts, and loss of ice roads, winter sports, snow cover, and tourist attractions like the Rideau Canal. Ontario has made positive steps (coal power plant closures, the cap and trade system, the Climate Change Action Plan), but more urgent measures must soon be taken.

Saxe encouraged the audience to find ways to reduce their own carbon footprint, but emphasized that the most effective tool is to contact their representatives. “Politicians are exquisitely sensitive to public approval. And it matters enormously to them what they hear from their constituents. If all they hear from their constituents is complaints about high electricity prices, guess what becomes the top priority for the government?”

Quoting Ban Ki-moon, secretary-general of the United Nations, Saxe added, “We’re the first generation to really feel the impacts of climate change and the last generation to be able to do much about it.”