From refugee camp to university

Visually impaired photographer follows his passions for photography and engineering
By: Will Sloan 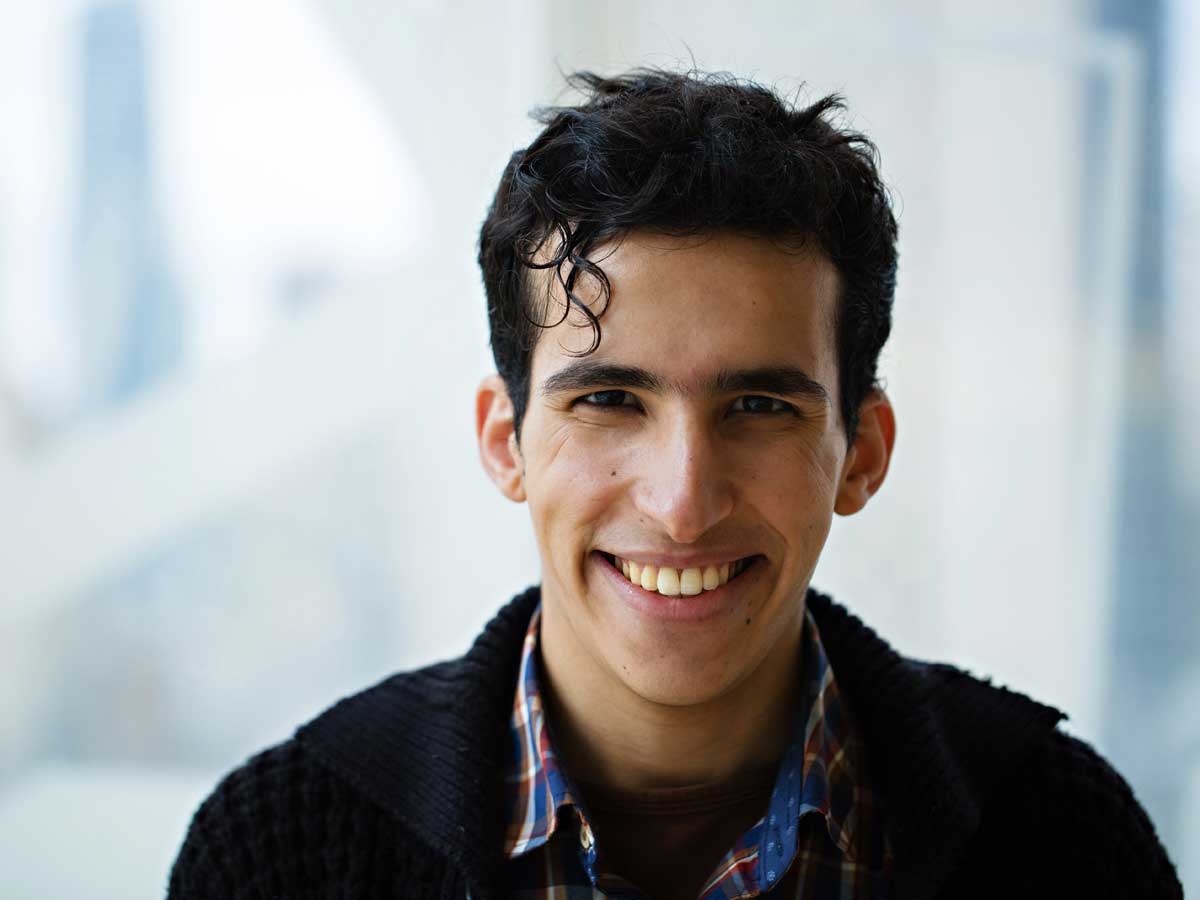 Photo: Hani Al Moulia has begun his first year at Ryerson through a $25,000 scholarship. Photo by Jessica Blaine Smith.

In 2012, at the age of 18, Hani Al Moulia fled his home country of Syria for a Lebanese refugee camp, where he would spend his next three years before moving to Canada. It was here that Al Moulia discovered his love of photography, documenting the lives of the many disparate people who now found themselves together. “I wanted something to do. I saw a lot of people coming to my camp and taking pictures, and I thought, ‘Well, I’m here, so I can do it, and I have the passion for it,’” he said.

Al Moulia, a first-year engineering student at Ryerson, has exhibited his photography to great acclaim. Those who see it would be unlikely to guess that Al Moulia is visually impaired.

“When I say that photography is my ‘third eye,’ it has a physical meaning too,” said Al Moulia. “When I take pictures, I might not be able to see most of the details. When I take pictures of something that is 20 feet away, I know that it’s there, and I can still see it, but not in focus. But when I look through a lens, I can see.”

His photos capture some of displacement and poverty of life in a refugee camp, but also the moments of warmth, resiliency, and community. “It’s very complex based on their situation,” said Al Moulia. “In my refugee camp they were teachers, PhD students, businessmen…but they lost everything, and that’s something in common. That’s what makes it so complicated. Me, I didn’t grow up in a refugee camp—I had a good life, but it was interrupted.

“In a refugee camp, the lifestyle is different. Everything is different from the real world, so the emotions are real. You don’t have a calendar, you don’t have to rush—it’s just you. And also, people have a stereotype about the refugee camp life, but it’s not the full picture. People still can find things if they want. It’s a paradox.”

Admitted to Canada in 2015, Al Moulia and his family spent a year in Regina, Saskatchewan, where he continued to hone his skills as a photographer. During this period, his photos came to the attention of Canadian Journalists for Free Expression, external link, opens in new window, which displayed them at the 2015 gala A Night of Courageous Reporting, external link, opens in new window. Later that year, Al Moulia and UN photojournalist Brendan Banning delivered a presentation, opens in new window at the School of Image Arts in the Faculty of Communication & Design.

Al Moulia was one of 15 young Canadians, external link, opens in new window selected in 2016 to be the first members of the Prime Minister’s Youth Council.

Now, Al Moulia has just begun his first year at Ryerson, made possible by a $25,000 scholarship. And, through Sajjad Ebrahim—a supporter to the Ryerson University Lifeline Syria Challenge—he was introduced to Brian Mech, president and CEO of eSight, external link, opens in new window, a company that makes electronic glasses that help the legally blind actually see. eSight provided Al Moulia with these electronic glasses that give Al Moulia sight. “It works like a camera. I take computer engineering and it’s really hard to see the screen, but with these new glasses, I actually can.”

Looking to the future, Al Moulia says his biggest goal is to combine arts and science. “This is the new world,” he said. “People now are not easy to convince. They want something to entertain them and something to teach them. The new technology should be to combine these elements for the tech generation.”

(eSight believes that everyone deserves to see, and if you would like to help contribute to Al Moulia’s glasses, or support eSight in its mission to help others get this technology regardless of their ability to pay, please contact eSight, opens in new window or visit giving.esighteyewear.com, external link, opens in new window).