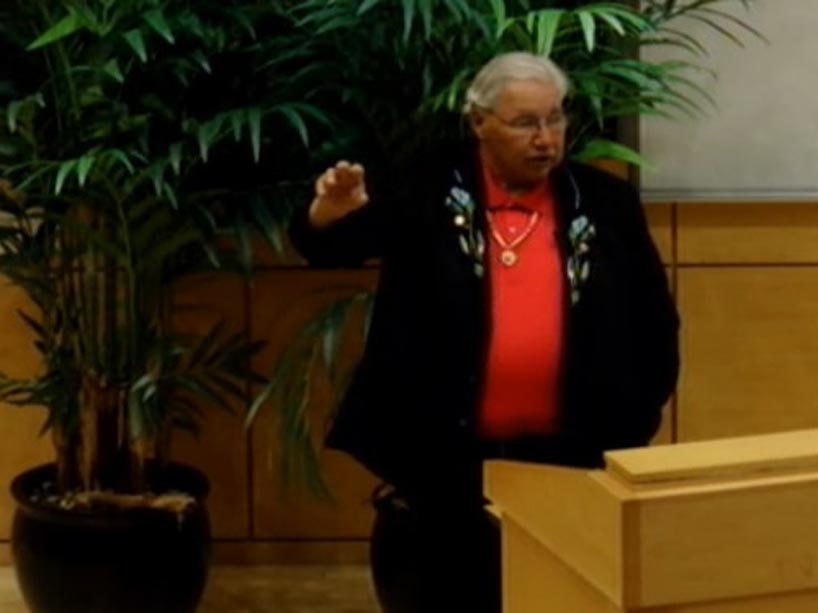 For generations of aboriginals in Canada, their history and culture was off-limits. Delivering the keynote address at the 2016 Ryerson Faculty Conference on May 19, Canadian Senator Murray Sinclair told Ryerson staff, faculty, and community members his own story of reconnecting with his heritage.

Sinclair remembered that his grandmother could speak Ojibwe, Cree, French and English. But after he started school at age six, his grandmother forbade him to speak either of the aboriginal languages. “I often wondered why that was the case, and I think I found the reason,” said Sinclair to the audience. “It’s because she wanted to save my life.

“What that was about was not that somebody was going to try to kill you if they saw you speaking Cree or Ojibwe. It’s because, in accordance with Christian teachings, if you left this world and you were a savage—even pagan—you were going to hell. That’s where you were going to end up. My grandmother was a devoutly religious Catholic woman, and she wanted me, and all of us, to go to heaven.”

Sinclair was the chair of the Indian Residential Schools Truth and Reconciliation Commission, and in his presentation outlined the legacy of abuse the schools inflicted on aboriginal communities. In as many as 1,300 schools (run largely by the Canadian government or Catholic Church), children were forcibly separated from their parents and subjected to “civilization”: slave labour, erasure of their culture, as well as physical, emotional and sexual abuse.

Sinclair also outlined how the government stifled any resistance, through voter-suppression and oppressive laws (it was once an offense for a lawyer to give advice to an Indigenous person). He called on young Indigenous people to be sympathetic towards earlier generations that lost touch with their culture. “They, some might tell you, are the ones who didn’t teach you what you really need to know. … They were told to believe that if they did that, they were committing a sin, and that sin would not only come upon them in their life after, but it would also fall on your shoulders.”

Despite Egerton Ryerson’s advocacy for residential schools, Sinclair praised the university that bears his name, saying its “commitment to equity, diversity and inclusion is what his namesake now stands for.” Addressing why the government of Canada and the indigenous community are still in a state of conflict, he stated, “It has to do with trust: we do not yet trust each other. It’s going to take a while. As I said at the end of [the Truth and Reconciliation Commission], ‘If you thought getting to the truth was hard, getting to reconciliation is going to be even harder.’

“But it’s something we need to do, because this country cannot continue with this state of conflict. The ones who are going to lead us are the young Indigenous and non-Indigenous students who understand all of this, and who can turn this experience into the foundation of a new relationship. That new relationship will be one of mutual respect.

He added, “For young Indigenous people, we can talk about a mutual relationship, but we have to give them an opportunity to develop self-respect first.”
The Ryerson Faculty Conference was a daylong event that explored how to embed principles of equity, diversity and inclusion in the classroom reflecting the values of Ryerson’s academic plan, Our Time to Lead.