As Vice-President of News and General Manager, CP24, Joanne MacDonald is responsible for the day-to-day operations and strategic vision of CP24, as well as maintaining her role with the operations of CTV News.

MacDonald has spent more than 25 years with CTV. Prior to her appointment as Vice-President in 2002, MacDonald served in a number of senior positions within CTV News. She was Director of CTV News from 1997 to 2002, after holding positions as deputy Ottawa bureau chief (1995-97) and Bureau Manager (1990-95). MacDonald started her CTV career in 1983, as a story producer for Canada AM, eventually moving to National News as a field producer in 1989. Before joining CTV News, MacDonald worked as an operator and producer for radio stations CJRT and CJCL. 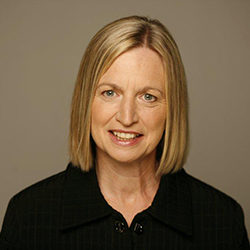