Eric Koreen, School of Journalism ’07, is a sports reporter at The Athletic Toronto.

How has your journalism degree helped you?

It was definitely my gateway into the industry, for starters. It carries with it an air of legitimacy that, while not necessary anymore, will help you in the competitive job market.

It’s not just the few letters you get after graduating that help, though. Memories from many classes still come flying back on a weekly basis, from where to put modifiers in a sentence to how to engage a reader with a lede that is not strictly news-based. Also, the internship I received at the end of my degree was crucial to getting a stronger foothold in the business.

What have you done since graduating and how did you arrive at your current position?

I was working part-time at the National Post sports department when I graduated. Within a year, I was hired as the basketball reporter when the position opened up at the newspaper. I was there, in total, for nearly 10 years, before I was laid off in 2016. Within a few months, I was one of the first hires of The Athletic Toronto, again, covering basketball. We now have markets in every Canadian city with an NHL team, as well as many American markets. There are also verticals on college basketball, college football, hockey and baseball, with expansion plans always in the works.

Thinking back to your first year self, how do you think they would react to where you are now?

What’s one of your favourite memories from j school?

One of the stories I always end up telling is embarrassing, but it’s that stuff that sticks out. In our first year print reporting class taught by the now-retired Don Gibb, there was a simple rule: Get a proper noun wrong, fail the assignment. Absolutely an important lesson to learn and I’m glad I learned it then and not now. Anyway, in writing a story about — well, it’s been 15 years, I’m not sure what it was about — I called disgraced senator Mike Duffy by the name of Bill Duffy, NBA agent. I saw the mistake in decisive red ink, walked toward the student lounge and cursed a lot. Good times!

Can you talk about one of the biggest challenges you’ve faced as a journalist?

That was a joke about the importance of asking open-ended questions, which in a way is one of the greatest challenges I’ve faced. I remember Ann Rauhala, my third-year print professor, used to talk about how print journalists tended to fall closer to one end of the reporter-writer spectrum — meaning they were more comfortable digging for information or more comfortable producing content. I am closer to being an introvert than most journalists, so I skew toward the latter end. I hate the thought of inconveniencing people and having stilted conversations. I definitely have not mastered the above, but I will say that the key to improving is letting go of your ego. It’s fine to ask a bad question — nobody will pay as much attention to it as you will. Also, you’re never going to be perfect at every part of your job (unless you’re Sports Illustrated’s Lee Jenkins). Accept what you bring to the table, and be the best version of yourself that you can be. This is getting sappy.

Any memorable School of Journalism professors during your time at the univerity?

I’ve named them both already, but Don Gibb and Ann Rauhala were the two that stick out. Both were so good with the nuts-and-bolts of reporting and also as virtual job coaches, showing you how to keep your head up when your confidence is lagging.

What advice would you give to current journalism students?

In my time, there was often advice to generalize and get a broad base of knowledge. Given how journalism has changed, I’d lean the other way: specialize. What do you bring to the table that others don’t? What are you interested in that others aren’t? Be the thing that others can’t be.

Saying that, broaden your horizons within that specialty. Read more perspective, get uncomfortable within your comfort zone.

Grads at Work is an occasional series of profiles of alums. If you know of a notable grad you’d like to see featured, send us an email at office.journalism@ryerson.ca. 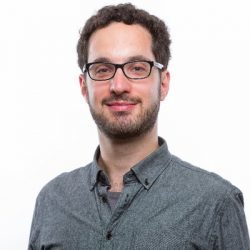