By: Frank Clayton and Diana Petramala

The Greater Golden Horseshoe (“GGH”) is vast, encompassing nine distinct economic regions, as delineated by Census Metropolitan Areas (“CMAs”) within its boundaries. A CMA, as defined by Statistics Canada, is an economic region characterized by a high degree of integration between adjacent municipalities and the central urban area as measured by commuting flows derived from place of work data. Each of the CMAs within the GGH has varying linkages with the other CMAs, but all have a dominant central urban area and labour and housing market.

Recently released estimates of Gross National Product (“GDP”) for CMAs across Canada from 2010 to 2018 allows us to quantify the economic significance of the Toronto CMA (“Toronto”) within the GGH and how its role has changed over time.1 We also offer insights into what the future holds if Toronto municipalities fail to provide sufficient amounts of ground-related homes (singles, semis and townhouses).

Toronto rules the economic roost in the GGH

We all know that the Toronto CMA is an economic powerhouse within Ontario and Canada, where it counts for about 53% and 20%, respectively, of annual economic production (all goods and services).

Figure 1 provides GDP information for the nine CMAs contained with the boundary of the GGH planning region as delineated by the Ontario Government in 2018. The data show that within the GGH: 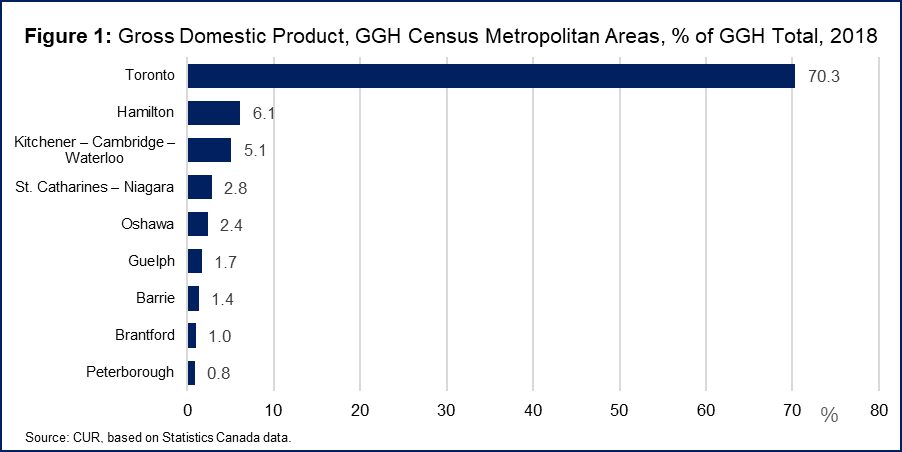 Figure 2 shows the percentage share of the GGH’s economic growth by CMA for 2010-2014 and 2014-2018. This helps us pinpoint shifts in economic production within the larger planning region. 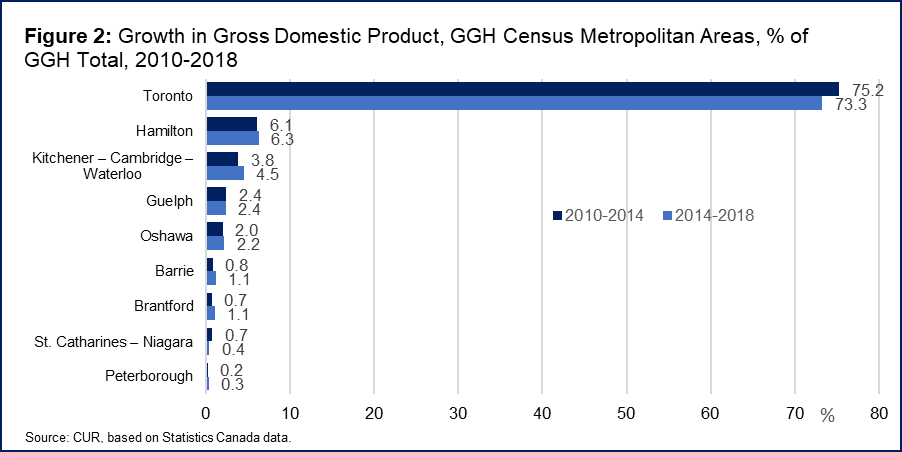 Because of data limitations, we approximate the Toronto CMA using data for the GTA2 to explore the 2020 Growth Plan forecasts for the spatial distribution of economic activity for the period up to 2051. We also substitute employment for GDP to measure future economic output within the GGH.

Toronto still dominates the GGH economy in 2051 under the forecasts prepared by Hemson Consulting in 2020 as background for updating the Growth Plan for the Greater Golden Horseshoe.3 Seventy-five percent of GGH’s employment is expected to be located in Toronto in 2051.4 However, its share of employment growth is expected to experience a modest decline over the next 30 years, according to Hemson Consulting, which expects Toronto to account for 72% of employment growth between 2021 and 2051 (see Figure 3). 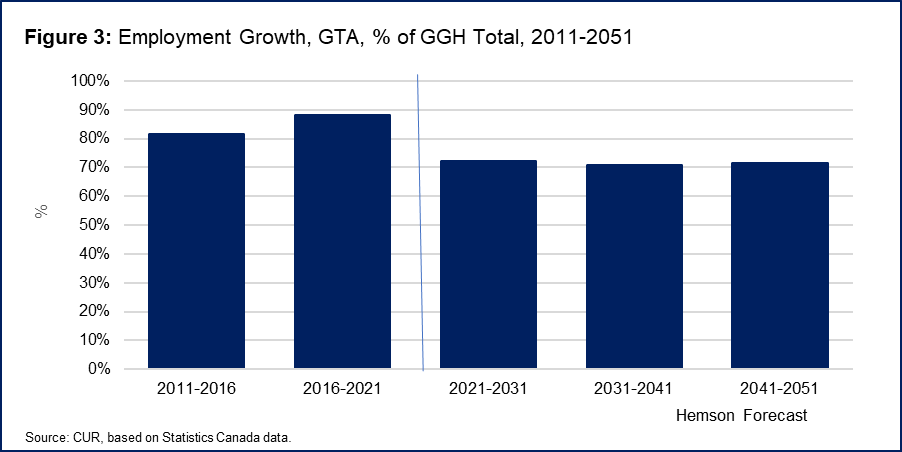 Interestingly, the Hemson Consulting forecasts also expect Toronto to capture 69% of the population growth in the GGH. This close correspondence of employment and population growth is needed if commute times for many working in Toronto are not excessive.

For the employment forecasts to become a reality, the percentage of the GGH labour force commuting to jobs in Toronto (the GTA) will have to remain about the same over the next 30 years. For this to happen, the provision of a sufficient supply of housing by type that matches market demand at affordable prices and rents within Toronto is important.

There is already evidence that the population outflow from Toronto to other parts of the GGH and beyond is accelerating as households drive until they can afford the ground-related homes they desire. For example, there was over a doubling in the average annual net outflow of resident population from Toronto between 2017-2019 compared to the prior five years, from 23,885 to 47,014. The pace of net outflow continued at 46,680 in 2020.5 This net outflow started before the pandemic and is expected to continue as long as Toronto (the CMA) underproduces ground-related new housing.

If the rate of population outflow continues to increase, it could well have unintended consequences on the location of jobs and the length of commutes:

A substantial increase in the supply of ground-related and associated “missing middle” types of housing within Toronto is much needed for the Hemson Consulting population forecasts to be realized.

[1] GDP is the total value of goods produced and services provided in a geographic area during one year. The boundaries of the Toronto CMA extend to Ajax, Pickering and Uxbridge on the east, Georgina, Bradford West Gwillimbury, New Tecumseth, and Orangeville on the north, and Milton and Oakville on the west. Statistics Canada Table: 36-10-0468-01, [Online] Available: https://www150.statcan.gc.ca/t1/tbl1/en/tv.action?pid=3610046801, external link

[3] The Hemson consulting employment and population forecasts for upper-tier and single-tier municipalities are embedded in Schedule 3 of the Growth Plan.

[4] The Toronto CMA accounted for 94% of the GTA’s population and 96% of employment according to the 2016 Census of Canada data.

[5] Clayton, Frank, Diana Petramala and Ethan Crowe (2021). “The City of Toronto Now the Second Fastest Growing Among U.S. and Canadian Central Cities in 2020, Down from First Place in 2019.” The Centre for Urban Research and Land Development. [Online] Available: https://www.ryerson.ca/centre-urban-research-land-development/blog/blogentry58/

[6] Population-related jobs are jobs serving population rather than businesses, such as retail, personal services, medical and education.