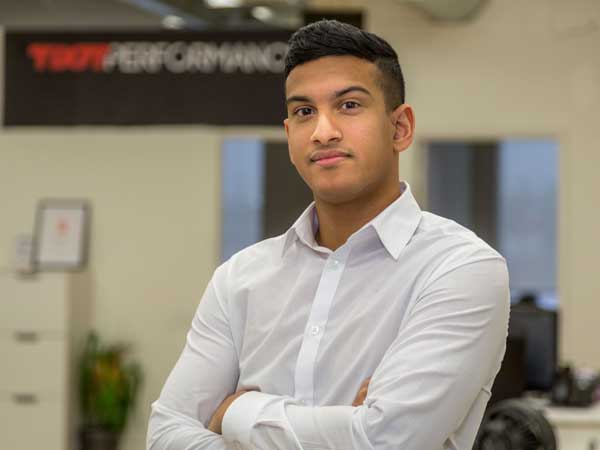 Charith Perera (Finance ’12) received a million-dollar deal on Dragons' Den and his company, TDot Performance, external link, is projecting annual sales of $10 million. But the Ted Rogers School of Management alumnus (Finance ’12) says that when he considers his path to success, it’s not the financial gains that stand out.

“Looking back on previous mistakes is the most rewarding part of the journey. It’s not the milestones that make you feel good. It’s looking back on the times you failed.”

Among these supposed failures are several entries in the Slaight Business Plan Competition, which he entered every year he was at the Ted Rogers School of Management.

Charith and his friends would meet at the Toronto Public Library and attempt to come up with business plans to win the competition. The team finished in second place in 2010, but never won. Despite their lack of a first-place finish, Charith says the process helped him build and refine the important pitching skills, which would eventually lead to his recent million-dollar deal on Dragons' Den.

Charith and his friends eventually landed on the idea to launch TDot Performance, a performance auto parts website that has continued to grow and now has 15 employees, many of whom are also Toronto Met graduates.

Charith credits TRSM peers Kurt Ty and Anica Vasic for being critical to starting and growing a business, and says courses like Intermediate Accounting I (ACC 414) taught him skills that are relevant in the day-to-day operation of TDot Performance.

What advice would Charith give to current Toronto Met students who are considering starting a business?

“Start now and be persistent. Always remember why you’re doing it, for when those inevitable struggles hit. I’m doing this because I’ve always wanted to support my family. My parents came to Canada from Sri Lanka with very little money in their pockets and managed to give me this great life, so I want to give back to them.”